AC Milan will be hoping to continue their fine unbeaten run when they welcome a struggling Parma side to San Siro on Wednesday.

The games continue to come thick and fast all across Europe, with Serie A inching towards a frantic finish. On Wednesday, AC Milan will be among the big teams in action, as they play hosts to Parma at San Siro.

AC Milan have turned a corner since the turn of the year, with their form since the resumption of football in Italy particularly being quite impressive. In six games in this period, the Rossoneri have won four and drawn a couple of games, with the latest being a 2-2 stalemate with Napoli. This run has left them just four points off fifth-placed AS Roma.

Parma, on the other hand, have been on the other end of the spectrum, as far as form is concerned. The Crociati are currently stationed at 12th on the Serie A table, with 40 points on the board. The post-lockdown period has seen Roberto D’Aversa’s men win just once so far and the visitors appear to be destined for a mid-table finish.

The reverse fixture, played at the Ennio Tardini Stadium back in December last year, ended in a 1-0 win for AC Milan, with Theo Hernandez scoring the only goal of the game. Ahead of the latest meeting between the two sides, The Hard Tackle takes a closer look at the encounter.

Stefano Pioli has a few injury concerns on his hands. (Photo by Marco Luzzani/Getty Images)

Stefano Pioli does not have a barrage of roster issues hampering his preparations ahead of the visit of Parma. On Wednesday, the AC Milan manager will be without just four first-team players, with Alexis Saelemaekers suspended, while Mateo Musacchio, Leo Duarte and Samu Castillejo are all out injured.

Castillejo is inching closer to his return, but the game against Parma will have come too soon for him. In his continued absence, Lucas Paqueta should continue on the right side of the AC Milan attack, despite his underwhelming displays of late.

On the left flank, Ante Rebic is a certain starter, with the Croatian international being the most in-form player for the Rossoneri. Paqueta and Rebic will likely flank Hakan Calhanoglu, with Zlatan Ibrahimovic leading the line for AC Milan against Parma.

In midfield, there is no looking past the solid duo of Franck Kessie and Ismael Bennacer in the double pivot. Bennacer will be tasked with keeping things tight, with Kessie supporting him in the defensive phase before moving the ball forward in transitions.

At the back, Simon Kjaer should pair up with captain Alessio Romagnoli in the central defensive partnership once again, even as his future remains up in the air. Andrea Conti and Theo Hernandez will be the full-back duo while Gianluigi Donnarumma takes his place in the Milan goal. 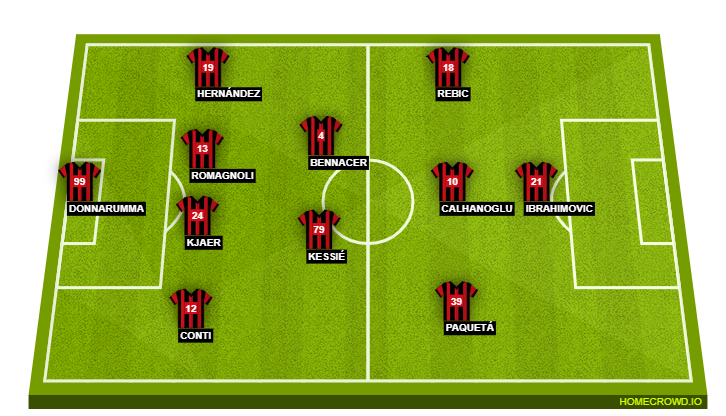 Unlike his counterpart in the AC Milan dugout, Roberto D’Aversa barely has any injury issues ahead of his side’s latest fixture. At San Siro on Wednesday, the Parma boss will be bereft of the services of just Andreas Cornelius, although the Danish striker is a huge miss for the visitors.

D’Aversa will line his side up in a 4-4-1-1 formation again, with a few changes expected against Milan. The first of these changes ought to be in the final third, with Roberto Inglese likely to start for the first time since January after being instrumental in earning Parma a point last time out.

Inglese will be supported by Juraj Kucka, who will be given the license to roam freely in the hole behind the striker. The two wide men should be rotated, with Gervinho and Juventus loanee Dejan Kulusevski coming in, while Matteo Darmian should be deployed as the right-back after starting in an advanced role against Bologna.

In the middle of the park, Matteo Scozzarella and Hernani are expected to pair up once again, with the duo aiming to stifle the flow of the AC Milan attacks. In the back-line, Darmian will have Bruno Alves, Simone Iacoponi and Riccardo Gagliolo for company, with Luigi Sepe starting between the sticks. 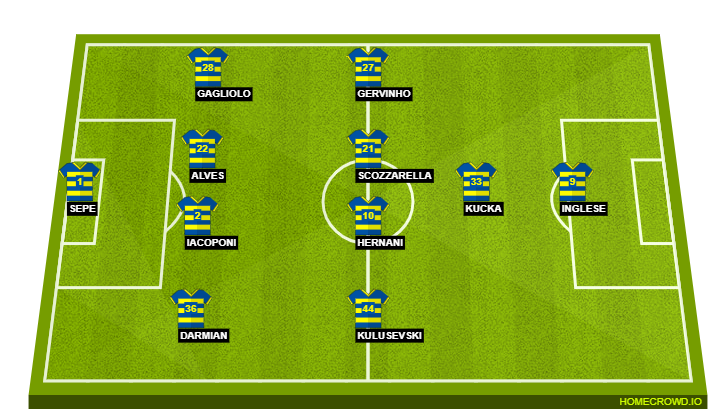 Something has clicked at AC Milan since the arrival of Zlatan Ibrahimovic in the winter. The Swede seems to have sparked the Rossoneri to life and to such an extent that even when he is not at his absolute best, they look like they can beat just about every opponent.

Perhaps, it is the self-confidence he exudes that has rubbed on to the rest of the AC Milan players, with Ante Rebic, in particular, benefiting a great deal from his presence on the pitch. After failing to score against Napoli, Ibrahimovic will now hope to find the back of the net, as he looks to inspire Stefano Pioli’s side back to European football next season.

This is perhaps, one of the easiest predictions to make in recent times. Parma did end a run of four successive losses last time out with a 2-2 draw. However, the Crociati will likely struggle at San Siro due to their fragile defence. AC Milan, on the other hand, have been imperious going forward for the most part, with the result against Napoli only likely to be a blip.

With Zlatan Ibrahimovic itching to get back to scoring ways and Ante Rebic playing as well as he has been, this has all the makings of a comfortable evening for the Rossoneri. All things considered, it will be a straightforward evening for Stefano Pioli & co. who should beat Parma 3-0 on at San Siro on Wednesday.