Inter Milan will be eager to return to winning ways after successive winless results when they welcome Torino to San Siro on Monday.

The action all across Europe has been relentless over the past month, with Serie A rushing towards the end of the 2019/20 season. The big game on Monday will feature Inter Milan, as they play hosts to Torino at San Siro, hoping to end their two-game winless run.

Inter Milan have tailed off dramatically after a solid start to the season, slowly fading out of the title picture. The Nerazzurri might have only lost the joint-fewest games so far (4), but a series of draws have left them ten points adrift of leaders Juventus. And, after failing to win each of their last two games, Antonio Conte’s men have dropped down to fourth on the table.

Torino, on the other hand, are perilously looking over their shoulders after a run of just 2 wins in their last 12 Serie A games. The Granata are currently placed 16th in the standings, with 18th placed Lecce just five points behind them. Moreno Longo’s men, though, would be buoyed by their most recent result, having beaten fellow relegation battlers Brescia 3-1 last time out.

The reverse fixture, played at Olympic Grande Torino Stadium back in November last year, ended in a 3-0 win for Inter Milan, with Lautaro Martinez, Stefan de Vrij and Romelu Lukaku on target. Ahead of the latest meeting between the two sides, The Hard Tackle takes a closer look at the encounter.

Antonio Conte does not have any fresh injury concerns hampering his preparations ahead of the visit of Torino. On Monday, the Inter Milan manager will be without just two first-team players, with Nicolo Barella and Stefano Sensi missing out due to their respective muscle injuries.

The duo, though, are inching closer to their return and will be in contention to feature soon. There is some good news heading into the latest fixture, with Victor Moses and Romelu Lukaku fit enough to be a part of the matchday squad at the very least.

Lukaku, though, might not be named in the starting lineup, especially with games coming thick and fast and the need to keep the players fresh being paramount. As a result, Alexis Sanchez should be a part of the strike partnership for Inter Milan, pairing up with Lautaro Martinez upfront.

The duo will be supported by Christian Eriksen, who will be the creator-in-chief for Inter Milan against Torino. With Eriksen pulling the strings, it will be important to have two solid midfielders backing him up. Roberto Gagliardini and Marcelo Brozovic will hold the fort in the middle of the park, to that end.

The width will be supplied by the two wing-backs, with Antonio Candreva and Ashley Young pinging in crosses from the two flanks. At the back, the onus will be on Stefan de Vrij to use his experience to good effect against the dangerous Andrea Belotti. The Dutchman will be partnered by Alessandro Bastoni and Milan Skriniar, with Samir Handanovic stationed in goal. 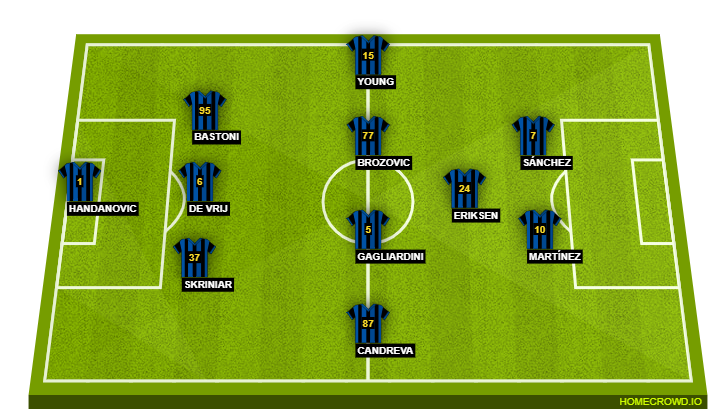 Moreno Longo has been dealt a major blow ahead of the trip to Milan to take on Inter Milan. On Monday, the Torino manager will be without star striker Simone Zaza, who is suspended, while Daniele Baselli is out for the rest of the season.

Much like his counterpart in the Inter Milan dugout, Longo will line his side up with a three-man central defensive unit. Armando Izzo will be returning to the starting lineup, taking his place in the back-three, with Nicolas N’Koulou and Gleison Bremer being his partners in defence. Salvatore Sirigu will take his place between the sticks for the visitors.

Ola Aina and Cristian Ansaldi will hold the key for Torino, with the duo tasked with stretching play and providing the crosses deep into the Inter Milan box. Soualiho Meite and Tomas Rincon will be the two central midfielders, who will aim to keep things tight in the middle of the park.

The star man for Torino is Andrea Belotti, who will lead the line against Inter Milan. The Torino captain will be supported by the wide duo of Alejandro Berenguer and Simone Verdi, with the duo looking to veer infield to create overloads in the central areas. 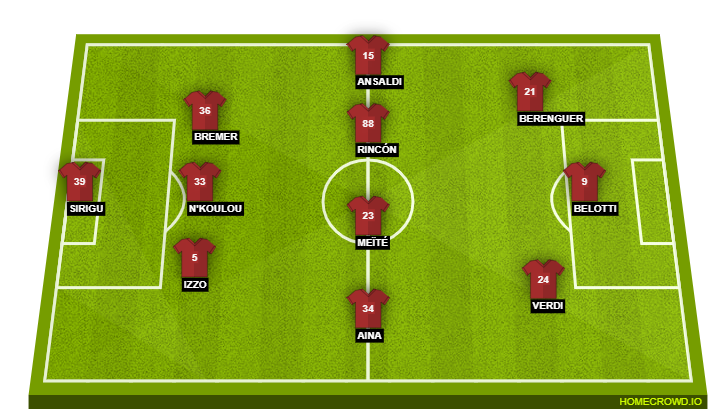 Will the Inter Milan captain step up? (Photo by Gabriele Maltinti/Getty Images)

Inter Milan might have one of the best defensive units in Serie A this season, but of late, they have been faltering at the back. Their nervy displays in the defensive phase of the game are starting to take a toll, with results going against them more often than not.

If the same is not to be the case against Torino, Inter Milan will need their captain to step up big time. Samir Handanovic has established himself as one of the best goalkeepers in Serie A on the back of several top class campaigns in goal. If he is at his best on Monday, Handanovic could inspire his side to return to winning ways.

Inter Milan have been underperforming for quite some time now and their poor results have sent them tumbling down the table. While they are still mathematically in the title race, the Nerazzurri practically have nothing to play for, with fifth-placed AS Roma 11 points behind and leaders Juventus as many points ahead.

Torino, on the other hand, have been horrendous despite winning in their previous fixture. The Granata have been shipping goals by the bagfuls and could be in for a tough time at San Siro too. All things considered, this looks like the perfect game for Inter Milan to return to winning ways. The Hard Tackle, therefore, predicts a 2-0 win for Antonio Conte & co.