Liverpool will be aiming to extend their perfect home record in the Premier League when they welcome Burnley to Anfield on Saturday.

The footballing action continues in the Premier League, as Gameweek 35 of the 2019/20 seasons begins just a couple of days after the end of the previous round of fixtures. Newly-crowned champions Liverpool will be in action on Saturday, when they play hosts to Burnley at Anfield.

Liverpool have enjoyed a stunning 2019/20 campaign in the Premier League, dropping points just four times in 34 games so far. The Reds’ form has slipped of late, but they have been nigh on perfect at Anfield, having won each of their 17 home games so far this term. Last time out, Jurgen Klopp’s men cruised to a 3-1 win over Brighton & Hove Albion at the Amex Stadium.

Burnley, on the other hand, have had a much improved season this time around. After finishing closer to the relegation zone last term, the Clarets look primed to end this season in the top half of the table. In fact, if results go their way, Sean Dyche’s men, who beat West Ham United 1-0 in their previous game, could end Gameweek 35 in seventh place.

The reverse fixture, played at Turf Moor back in August last year, ended in a 3-0 win for Liverpool, with Sadio Mane and Roberto Firmino on target while Burnley striker Chris Wood scored an own goal. Ahead of the latest meeting between the two sides, The Hard Tackle takes a closer look at the encounter.

Liverpool captain Jordan Henderson is ruled out for the rest of the season due to a knee injury. (Photo by Javier Soriano/AFP via Getty Images)

Jurgen Klopp has seen his squad’s fitness troubles increase in the last week or so. Ahead of the visit of Burnley on Saturday, the Liverpool manager could be without three first-team players, including captain Jordan Henderson.

The English midfielder is set to miss the remainder of the season due to a knee injury, which he sustained in the win over Brighton & Hove Albion. Apart from Henderson, Klopp will also be bereft of the services of Dejan Lovren (knock) and Joel Matip (foot), with the latter’s personal campaign brought to a premature halt as well.

Meanwhile, Klopp is expected to make a few rotations once again this weekend, as he aims to keep his troops fresh in a busy run-in period. There is no replacing Alisson Becker, though, with the Brazilian starting in the Liverpool goal again.

As for the back-line, Virgil van Dijk and Joe Gomez are certain starters at the heart of the Liverpool defence, with Lovren and Matip sidelined. On the right flank, Trent Alexander-Arnold is an obvious pick, while Andrew Robertson should return at left-back after a nervy display by Neco Williams last time out.

The big changes are expected to come in midfield, with one change invariably being a forced one. Henderson might be replaced by vice-captain James Milner, who will don the armband for Liverpool against Burnley. Fabinho should also return to the side, replacing Georginio Wijnaldum, with Naby Keita retaining his place in the middle of the park.

As for attack, Klopp seems to be rotating one of his regulars upfront. However, seeing as Mohamed Salah is in the thick of the action of the Golden Boot race, the Egyptian should start once again, with Sadio Mane and Roberto Firmino providing him company in the final third.

Unlike his counterpart in the Liverpool dugout, Sean Dyche does not have any fresh injury concerns hampering his preparations ahead of the trip to Anfield. On Saturday, the Burnley manager will be without five first-team players.

Captain Ben Mee is believed to be done for the season and as is Jack Cork, whose ankle injury will likely require a surgery to be fixed. Apart from the duo, Ben Gibson, Matthew Lowton and Ashley Barnes remain unavailable.

The absence of Mee and Lowton means there is very little room for rotations at the back. Kevin Long ought to start in place of Mee once again at the heart of the Burnley defence, partnering James Tarkowski. Phil Bardsley is an automatic pick at right-back in the absence of Lowton. On the opposite flank, Charlie Taylor is a certain starter.

The back-line will provide cover to Nick Pope, who is leading the race to win the Golden Glove and has been in spectacular form since the resumption of the Premier League last month. Up ahead in midfield, Josh Brownhill has been filling in for Cork commendably and the 24-year-old ought to pair up with Ashley Westwood in the middle of the park again.

The two wide midfielders for Burnley ought to be Dwight McNeil and Johann Berg Gudmundsson, with the latter being deployed on the right flank. Jay Rodriguez has looked in good touch lately and picks himself in the strike partnership. Rodriguez should have Chris Wood for company, with the New Zealander now fit enough to start against Liverpool. 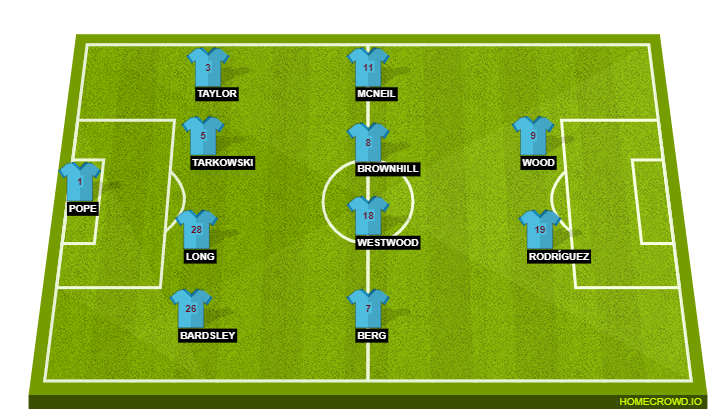 Can Mane step up? (Photo by Clive Brunskill/Getty Images)

Make no mistake about it. Sadio Mane has been incredibly crucial for Liverpool this season, as they won the Premier League title. However, as far as personal milestones are concerned, the Senegalese winger has fallen behind Mohamed Salah in the race to win the Golden Boot.

While Salah is on 19 goals as compared to Mane’s 16, Jamie Vardy is six out front with 22 strikes to his name. So, unless Mane manages to go berserk in the remainder of the campaign, winning the Premier League Golden Boot for a second season running appears to be out of the question. Having said that, he would at least like to force the issue, starting with a stunning display against Burnley.

They might have been a bit wobbly since the Premier League season resumed. However, Liverpool’s major struggles have largely been on the road. At Anfield, the Reds looked imperious against Crystal Palace, in what was a 4-0 hammering of the Eagles. Burnley, though, will prove to be tricky customers to get past on Saturday.

The Clarets are unbeaten in their last four games, winning three of those fixtures with a clean sheet. Nick Pope has been in inspired form in this run, as he looks determined to win the Golden Glove. Pope, though, will be up against Golden Boot contenders in Mohamed Salah and Sadio Mane, setting up an enticing contest at one end of the pitch.

Having said that, Burnley are unlikely to pose a great deal of threat on the other end, and their age-old issues at Anfield ought to persist on Saturday. All things considered, this is likely to be a low-scoring affair, with Liverpool expected to edge their visitors at the end of 90 minutes. The Hard Tackle, therefore, predicts a 2-0 win for the Premier League champions.