Brighton & Hove Albion will look to increase their gap to the relegation zone when they host Manchester City at the Amex Stadium on Saturday.

As we head into the 35th gameweek of the season, a lot of teams do not have a lot to play for. One of them are Manchester City, who have a nine-point lead over third-placed Chelsea and with a top four spot pretty much confirmed, there might be little motivation left for them.

Last week, the defending champions hosted Newcastle United at the Etihad in a game that finished in a 5-0 win for the home side. Gabriel Jesus, Riyad Mahrez, David Silva and Raheem Sterling were on target for Pep Guardiola’s side, while Federico Fernandez tucked the ball into his net for the third goal of the game.

Far from their best but still delivering. (Photo by Alex Livesey/Getty Images)

Brighton, on the other hand, had to welcome the newly-crowned champions Liverpool to the Amex last week. The Merseyside outfit scored two goals in eight minutes to push the game out of the Seagulls’ hands and then added the third in the 76th minute after Brighton had halved their lead.

Despite that result, Brighton’s spot in the table remained unchanged on 15th position with 36 points. A win over City would do them a world of good and could increase the gap from 16th-placed West Ham United, who will face a desperate Norwich City. However, they will have to put on a better display than they did in the reverse fixture when City hit them for four unanswered goals.

There are hardly any injury concerns for Graham Potter to cater to ahead of the visit of Manchester City. Jose Izquierdo is the only player who will definitely miss the game and in all probability, the rest of the season while Steven Alzate is a doubt for the fixture.

Mathew Ryan will continue in goal for Brighton, with Adam Webster and Lewis Dunk screening him from the heart of the Brighton defence. Dan Burn and Tariq Lamptey will provide the width from the back. Lamptey has gained admirers for his impressive performances since moving from Chelsea.

Davy Propper and Yves Bissouma will form the double pivot behind the attacking midfield duo of Aaron Mooy and Leandro Trossard. The four-man vertical midfield often drops to become a flat four while defending, and part of the wings while attacking sees Brighton shift from a 4-4-1-1 to a 4-2-4 through the 90 minutes.

Neal Maupay and Aaron Connolly will start as the strike partnership up top. Club record signing Alizera Jahanbakhsh is in contention for a spot in the lineup as well but is likely to miss out due to his inconsistent displays for the club. 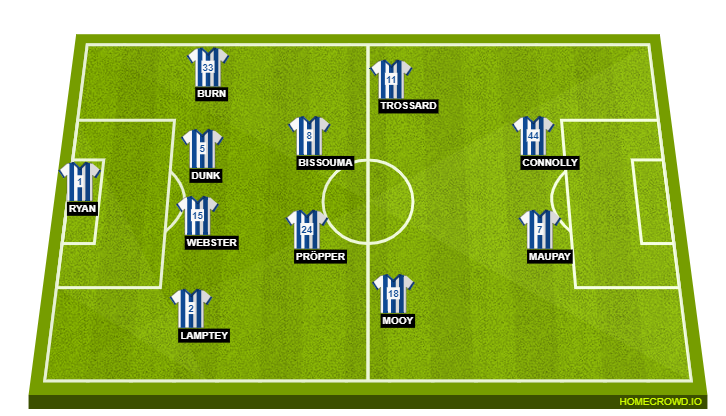 There are no fresh injury concerns for Pep Guardiola since their game against Newcastle United. Sergio Aguero is the only player who will miss out on the spot in the squad list as he has been declared to be out for the rest of the season, including the game against Real Madrid in the UEFA Champions League.

Aguero’s usual place ought to be taken up by Bernardo Silva, who will play as the False Nine in the three-man attack. Riyad Mahrez and Raheem Sterling will flank the Portuguese on the right and left sides, respectively. Bernardo has not scored in the Premier League since his hat-trick against Watford on Matchday Six and will hope to put an end to his drought.

No Aguero for the remaining four games. (Photo by Clive Mason/Getty Images)

Kevin de Bruyne will retain his spot on the right-hand-side of a midfield three, while Fernandinho should take up the place as the deepest midfielder, replacing Rodri. David Silva clocked in over 180 minutes in the past week and is expected to make an appearance from the bench, with Ilkay Gundogan replacing him in the centre of the park.

Benjamin Mendy and Kyle Walker will likely be full-back pairing while Aymeric Laporte and Eric Garcia ought to return to their positions as the centre-halves. This back four will shield Ederson Moraes, who will hold the fort for Manchester City. 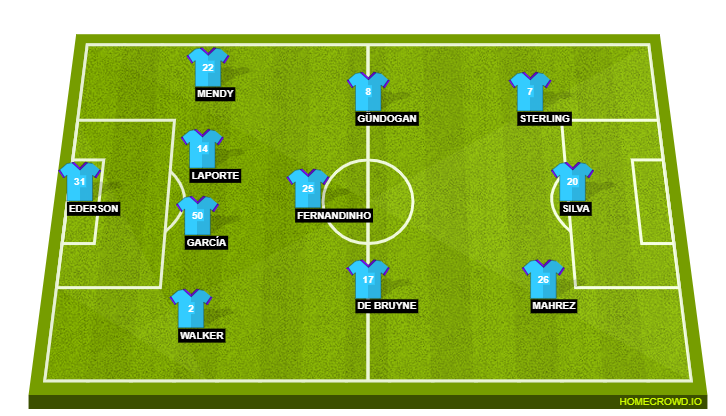 After a dull first season for Manchester City, Riyad Mahrez seems to have made the right flank his own this term. The Algerian has replaced Leroy Sane and Bernardo Silva to steal the spot in the lineup and has continuously delivered world-class performances.

In the 29 games he has played, Mahrez has scored ten goals and set up eight more for his teammates. He could become the second player in the Premier League to go into double figures for both goals and assists this season after Kevin de Bruyne. However, his skill set could come in particularly handy for City against Brighton.

The Algerian likes to start up wide and cut in on his preferred left side before pulling the trigger for a ball to the back post or a sumptuous curler. He will have to lock horns against the 6’6″ Dan Burn, who is slow, and rigid. In theory, Mahrez will be able to continually take advantage of the left-back through his brilliant footwork and agility.

Pep Guardiola made it very clear that his side are not happy after losing the Premier League title to Liverpool and that their new season started the moment they lost to Chelsea and were officially dethroned. The previous fixture between the two sides at the Amex Stadium ended with the same scoreline, and we do not expect it to go any better for Brighton on Saturday.

Neal Maupay’s has nine goals and two assists this season and his form could serve as some sort of a consolation for the Seagulls, but it seems unlikely that they will be able to steal the three points from Manchester City. However, Southampton’s 1-0 win against City last week could serve as motivation for Brighton. Nevertheless, we are going with a 4-1 win for the visitors here.