Inter Milan will be eager to return to winning ways when they take on Hellas Verona at Stadio Marcantonio Bentegodi on Thursday.

There is no shortage of action all across Europe and the same is the case in Italy. The big game on Thursday will feature Inter Milan, as they visit Stadio Marcantonio Bentegodi to lock horns with Hellas Verona, aiming to bounce back after their shock defeat on the weekend.

Inter Milan have fizzled out dramatically after a strong start to the season, when they had been going toe to toe with champions Juventus in the title race. The Nerazzurri are now lagging behind by a considerable gap of 11 points, with the latest setback coming in the form of a 2-1 loss to Bologna at home last time out.

Hellas Verona, on the other hand, have enjoyed a decent 2019/20 Serie A campaign, one which could end with European qualification. The Gialloblu are currently placed 8th on the table, but have slipped since the resumption of the league, having won just one of their last four games.

The reverse fixture, played at San Siro back in November last year, saw Inter Milan come from behind to beat Hellas Verona 2-1, with Nicolo Barella scoring a late goal with a peach of a finish. Ahead of the latest meeting between the two sides, The Hard Tackle takes a closer look at the encounter.

Ivan Juric does not have any fresh roster issues whatsoever hampering his preparations ahead of the visit of Inter Milan. On Thursday, the Hellas Verona manager will be without six first-team players, although none of the absentees pose a major concern.

Those missing out against Inter Milan for Verona are Pawel Dawidowicz, Claud Adjapong, Eddie Salcedo, Sofyan Amrabat, Fabio Borini and Valentin Eysseric. Juric will line his side up in a 3-4-2-1 formation, with Marco Silvestri taking his place in goal once again.

The three-man central defensive unit ought to feature Amir Rrahmani, Marash Kumbulla and Koray Gunter, with Davide Faraoni and Darko Lazovic being the two wing-backs. While off the ball, Verona will shift to a flat back five, with a four man midfield screening them.

The double pivot in the middle of the park will see Emmanuel Badu line up alongside Portuguese veteran Miguel Veloso. The latter will hold the fort in the front of the back three, with Badu being the player to link midfield with attack. Mattia Zaccagni and Valerio Verre will take up central positions behind the striker, with top scorer Samuel Di Carmine leading the line.

Unlike his counterpart in the Hellas Verona dugout, Antonio Conte has a couple of fresh concerns on his hands ahead of his side’s latest fixture. On Thursday, the Inter Milan boss will be without as many as five first-team players.

Two of these players are suspended after the ill-tempered Bologna game, with Alessandro Bastoni and Danilo D’Ambrosio serving their respective one-match bans. Apart from the duo, Victor Moses, Nicolo Barella and Stefano Sensi are also unavailable for selection.

However, there is some good news, with Milan Skriniar finally at Conte’s disposal and expected to slot into Inter’s three-man central defensive unit. D’Ambrosio’s absence means Diogo Godin starts, with Stefan de Vrij being the third man in the back three, with captain Samir Handanovic stationed between the sticks.

Barella’s absence means the partnership of Roberto Gagliardini and Marcelo Brozovic ought to be retained. With Moses still unavailable, Antonio Candreva remains a certain starter as the right wing-back while on the opposite flank, Cristiano Biraghi might get a chance to impress.

Christian Eriksen will play off the two strikers, looking to pick out defence splitting passes. The Dane will also pose a great deal of threat during set-piece situations. Upfront, Lautaro Martinez and Romelu Lukaku are expected to be the strike partnership once again. 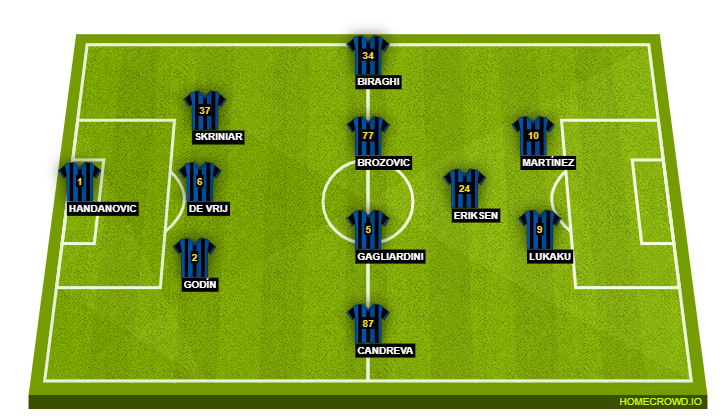 The 2019/20 season has helped establish Lautaro Martinez as a bonafide star while also enabling him to attract interest from the likes of Barcelona, among others. Of late, though, the Argentine has been blowing hot and cold.

In fact, in a decisive moment against Bologna this past weekend, Martinez missed his penalty, which is quite unlike the young striker. As the season reaches its most crucial period, Antonio Conte will hope his star forward regains top form, starting with the difficult outing against Hellas Verona.

After dropping points twice in five games since the resumption of the Serie A, Inter Milan are in a bit of a precarious position. While they cannot go out of the top four anytime soon, they could drop to fourth soon, with Atalanta just a point behind them. So, a win over Hellas Verona is imperative.

Having said that, Ivan Juric’s side are quite a tenacious unit and will make things incredibly tough for the Nerazzurri. In fact, it would hardly be surprising if Verona strike first in the game before Inter hit back, just as they did in the reverse fixture. This time around, though, a win might be a bit of a stretch, which is why The Hard Tackle predicts a 2-2 draw between the two sides.