Newly-crowned Premier League champions Liverpool will be hoping to bounce back to winning ways when they welcome Aston Villa to Anfield on Sunday.

Gameweek 33 of the 2019/20 Premier League season continues into Sunday, with newly-crowned champions Liverpool in action. Jurgen Klopp’s men will be playing playing hosts to Aston Villa at Anfield, in what will be their first home game since clinching the title last week.

Liverpool have enjoyed a record-breaking Premier League campaign, sealing the deal with seven games to go in the season, the earliest ever in English football history. The Reds look are on course to break Manchester City’s record of 100 points in a single season but will need to improve on their performance from earlier this week, having been thrashed 4-0 by Pep Guardiola’s men.

Aston Villa, on the other hand, have been in all sorts of trouble on their return to the top-flight. The Midlands club have constantly been mired in the relegation and are currently second from bottom, although 16th-placed Watford are just one point ahead. Dean Smith’s men are, however, currently on the longest winless run in the Premier League, having not been victorious in any of their last 8.

The reverse fixture, played at Villa Park back in November last year, was a nail biter, as Liverpool came back from a goal down to beat Aston Villa 2-1, scoring deep into injury time. Ahead of the latest meeting between the two sides, The Hard Tackle takes a closer look at the encounter.

Joel Matip is the only player unavailable for Liverpool. (Photo by Michael Regan/Getty Images)

Jurgen Klopp does not have any fresh injury concerns hampering his preparations ahead of the visit of Aston Villa. On Sunday, the Liverpool manager will be without just one first-team player, with Joel Matip unavailable due to a foot injury.

With the Premier League title already wrapped up, there is a feeling that Klopp could rotate his troops in order to give fringe players and youngsters some game time. However, during his pre-match press conference, the Reds’ boss claimed that he will only field strong lineups for the rest of the season.

Having said that, Klopp should still make a few changes to his side in order to shake things up after the 4-0 hammering Liverpool received from Manchester City last time out. No alterations are likely in defence, though, with hardly any recognised backups available.

Therefore, Harry Maguire and Joe Gomez should pair up at the heart of the Liverpool defence, with Trent Alexander-Arnold and Andrew Robertson being the full-back pairing yet again. Alisson will be stationed between the sticks for the Reds against Aston Villa, with Adrian being his deputy.

The big changes could be seen in midfield, with Jordan Henderson likely to be given a breather. In place of the Liverpool captain, Alex Oxlade-Chamberlain could get a chance to impress, with Naby Keita also expected to come into the side at the expense of Georginio Wijnaldum, who struggled at Manchester City. Fabinho will keep his place at the base of midfield.

Up ahead in attack, Mohamed Salah and Sadio Mane should start, as they continue their quest to win the Golden Boot once again. Roberto Firmino, though, could make way for Takumi Minamino, with the Brazilian struggling to make an impact since the resumption of football.

Unlike his counterpart in the Liverpool dugout, Dean Smith has quite a few fitness issues on his hands ahead of the trip to Anfield. Against Liverpool on Sunday, the Aston Villa boss will be without four first-team players. In addition, Henri Lansbury and Frederic Guilbert will face late fitness tests to determine their availability.

Those who are certain to miss out, though, are Tom Heaton (knee), Matt Targett (thigh), Bjorn Engels (Achilles) and Wesley (knee). Smith has lined his side up in a 4-3-3 since the return of the Premier League and should continue doing so against Liverpool.

Orjan Nyland should be preferred ahead of former Liverpool goalkeeper Pepe Reina in the Aston Villa goal, even though he has not been entirely convincing. In defence, Ezri Konsa should deputise in the absence of Guilbert, with Neil Taylor starting in the absence of Targett. Tyrone Mings and Kortney House being the central defensive pairing.

Up ahead in midfield, Douglas Luiz will play the Anchor Man role, looking to keep a check on the Liverpool striker, who will drop deep quite often. John McGinn and Conor Hourihane will be the other two midfielders, with McGinn given the freedom to express himself further up the pitch while the latter will provide defensive support to Luiz.

Jack Grealish will be the key man for visitors in the final third, with the Aston Villa captain given a free role from the left wing slot. Keinan Davis ought to lead the line for the Villans against Liverpool and Anwar El Ghazi will complete the attacking trifecta. 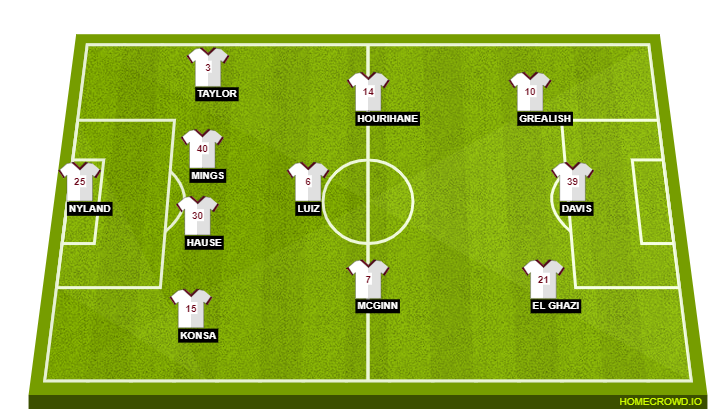 Liverpool are comfortable favourites for the bookmakers, with NetBet putting them at odds of 1.30 to win against Aston Villa. NetBet provides more than just football betting though. Users can bet on Esports games, virtual games, with NetBet even having a casino section.

Salah will be hoping to bounce back strongly. (Photo by Paul Ellis/AFP via Getty Images)

After a strong showing against Crystal Palace, Salah could not manage to get into a scoring run last time out against Manchester City. Having said that, the Egyptian was the only Liverpool player who looked like he could make a difference on the day.

After such an outing, Salah would be itching to make a difference, especially with Jamie Vardy pulling away in the Golden Boot race on Saturday. With the Leicester City hit-man still within sight, Salah will be desperate to make the difference against Aston Villa, especially with the record of 50 home Premier League games also within touching distance.

Make no mistake, Liverpool were extremely underwhelming against Manchester City, to put it mildly. However, if there is one thing that the Reds have made a habit out of under Jurgen Klopp, it is to bounce back after a horrible result. To make things easier, they face the worst team, on form, in the Premier League right now in Aston Villa.

While Dean Smith & co. could sense an opportunity to pounce on a complacent side, a Liverpool side that would be hurting could make it a long day at work for the visitors. Expect a commanding performance by the newly-crowned Premier League champions, with Mohamed Salah and Sadio Mane producing a masterclass. We predict a 3-0 win for Liverpool.