Inter Milan will be hoping to extend their unbeaten streak in Serie A when they welcome Bologna to San Siro on Sunday.

The games continue to come thick and fast in the Serie A, with Inter Milan the big team in action on Sunday. The Nerazzurri will be playing at home this weekend, as they play hosts to Bologna at San Siro, with the hopes of taking one more step towards booking their place in next season’s UEFA Champions League.

Inter Milan have made decent progress under the tutelage of Antonio Conte, although the 2019/20 season would likely be a case of “what could have been” for them. After looking like title contenders in the early stages of the season, the Nerazzurri have slowly faded away and look like they will end up 3rd. However, Conte’s charges have been decent of late, winning 3 of their last 4 Serie A games.

Bologna, on the other hand, look destined for a mid-table finish, having dropped their levels since the turn of the year. Following the resumption of Serie A, the Rossoblu have won just 1 of their 3 games, although they are still in with a slim chance of making it to the Europa League.

The reverse fixture, played at Renato Dall’Ara Stadium back in November last year, ended in a 2-1 win for Inter Milan, with Romelu Lukaku scoring a match-winning brace. Ahead of the latest meeting between the two sides, The Hard Tackle takes a closer look at the encounter.

Milan Skriniar will not be available for Inter Milan. (Photo by Alex Burstow/Getty Images)

Antonio Conte made a number of alterations to his staring lineup last time out. But against Bologna on Sunday, the Inter Milan manager will likely revert to picking most of his regulars, who were well-rested in the midweek fixture.

In goal, there is no looking past Samir Handanovic, who will be protected by the back-three of Diego Godin, Stefan de Vrij and Alessandro Bastoni, especially with Milan Skriniar still suspended. The big news for Inter, though, is the availability of Marcelo Brozovic.

The Croat had been on the sidelines of late, but should be fit enough to make his return to the side against Bologna. Brozovic will start in the midfield double pivot alongside Nicolo Barella, with January signing Ashley Young being the left wing-back yet again.

Young has been in fine form since joining Inter Milan, with the left wing-back role suiting his strengths while masking the weaknesses. On the opposite flank, Antonio Candreva should return, with Victor Moses being a major doubt due to a knock.

Upfront, the big decision for Conte to make will be picking the strike partnership. Romelu Lukaku is a certain starter after being given a breather in the last game. Lukaku’s partner should be Alexis Sanchez, who was in tremendous touch against Brescia and could get another chance to impress ahead of Martinez. Christian Eriksen will play off of Lukaku and Sanchez. 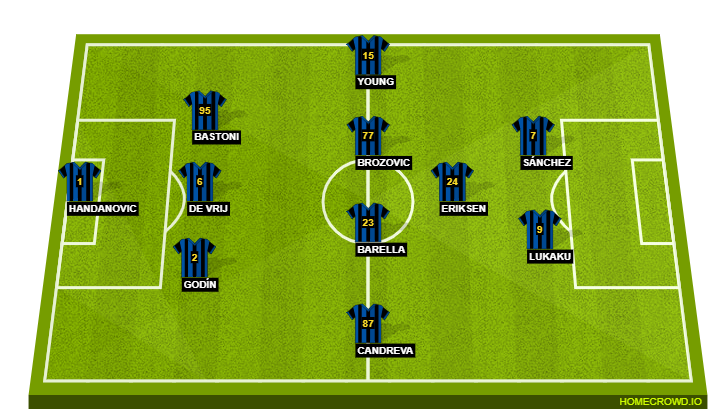 Sinisa Mihajlovic has quite a few injury concerns hampering his preparations ahead of the trip to Milan. Against Inter Milan on Sunday, the Bologna manager will be bereft of the services of four first-team players, with Andreas Skov Olsen, Federico Santander, Ibrahima Mbaye and Andrea Poli all out injured.

Mihajlovic will likely line his side up in a 4-3-3 formation once again, with the three-man midfield being tasked with overloading the middle of the park in order to overwhelm Inter and surpass their gameplan. In goal, there is no looking past Lukasz Skorupski.

Skorupski will play behind the four-man defensive unit of Danilo, Mattia Bani, Mitchell Dijks and Takehiro Tomiyasu. Danilo and Bani will pair up at the heart of the Bologna defence, with Dijks and Tomiyasu being the two full-backs.

In midfield, former Inter Milan man Gary Medel will hold the key, with the Chilean sitting in front of the back-line, keeping things tight while hoping to keep a quick tempo in the game. Medel will be supported by Jerdy Schouten and Roberto Soriano, with the duo being the workhorses in midfield.

Riccardo Orsolini, Bologna’s top scorer this season, will be the crucial figure in the final third, with the young winger providing the bulk of the goal threat. Former Inter Milan striker Rodrigo Palacio will lead the line, with Nicola Sansone coming into the side, starting on the left wing. 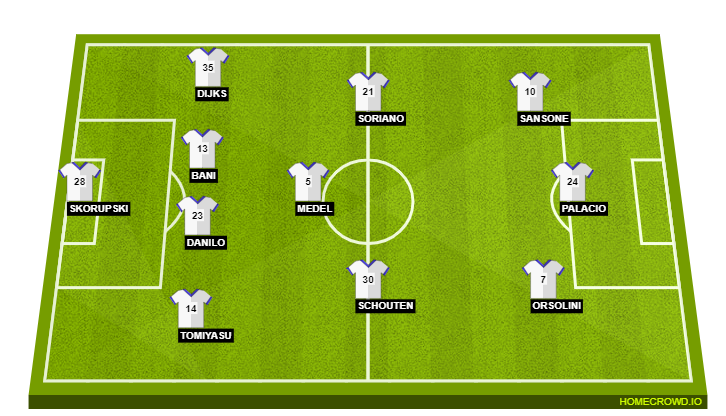 Looking to make a point. (Photo by Paolo Rattini/Getty Images)

His time at Manchester United might have been one to forget, but Alexis Sanchez has gone some way in redeeming himself at Inter Milan. The Chilean has had his fair share of troubles, but his latest performance shows that he has got what it takes to make an impact for the Nerazzurri.

In what was a masterclass of a showing against Brescia, Sanchez scored one goal and created two others in what was arguably his best performance so far in Inter Milan colours. He now has the chance to end the season on a high and with Antonio Conte gushing over him lately, Sanchez must now look to build on his performance.

Inter Milan have slowly found their feet since the restart of the Serie A season. While their title hopes might well and truly be over, Antonio Conte’s charges can surely do well to strengthen their current position on the table and build up the rhythm that will keep them in good stead when the UEFA Europa League begins.

Bologna’s chances of European qualification are getting slimmer by the week and their struggles could continue on Sunday. Expect Alexis Sanchez and Romelu Lukaku to do some damage, with Inter Milan coasting to a 2-0 win over Bologna.