Barcelona will hope to get back to winning ways when they take on Villarreal at Estadio de la Ceramica on Sunday.

The title race in La Liga has cooled down significantly after Barcelona registered three draws in their last four games including, two 2-2 stalemates on the bounce against Celta Vigo and Atletico Madrid. The defending champions will look to turn their fortunes around when they travel to Estadio de la Ceramica to face off against Villarreal.

The Blaugrana were subject to refereeing errors in two consecutive games, a penalty that was not given versus Celta and a penalty that was incorrectly given against Atletico. Despite that, there was hardly any intent to be seen from Barcelona in either of the games.

The club has gone into turmoil since the restart of the season, which includes underwhelming performances one after the other, reports that Quique Setien might get sacked, the Antoine Griezmann drama, Lionel Messi pushing for an exit and of course, the Arthur Melo saga.

It will be Adios Arthur soon. (Photo by Alex Caparros/Getty Images)

Their next opponents, Villarreal, are in considerably better form and everything seems to be falling in the right place for them. They have not lost any game since the restart and their form is only bettered by leaders Real Madrid. This incredible run has helped the hosts rise to fifth on the table, three points adrift of a Champions League spot.

The Yellow Submarine travelled to Seville last week and registered a 2-0 win over Real Betis in a game that saw Gerard Moreno score twice within thirty minutes. Villarreal’s win was helped due to the fact that Nabil Fekir was sent off in the first half after picking up two yellow cards in two minutes.

Barcelona were able to narrowly escape with a 2-1 win in the reverse fixture after Griezmann and Arthur scored a goal apiece, while captain Lionel Messi hobbled off with injury. The Hard Tackle takes a closer look at this fixture, which promises to deliver a lot.

Javier Calleja will have a near full strength at his disposal ahead of the game against Barcelona with the exception of Ramiro Funes Mori, who is not expected to be back this season. Vincent Iborra remains a doubt, but might just get the green light because of the importance of this fixture.

The brilliant Sergio Asenjo will continue in goal and will look to add to his 11 clean sheets for the season. Ahead of him, Mario Gaspar and Alberto Moreno will provide the width from the back while Raul Albiol and Pau Torres start at the heart of the Villarreal defence. Torres has been linked with Barcelona, but the move is far from going through right now.

Andre-Frank Zambo Anguissa and Manu Trigueros will get the responsibility to screen the defence as the double pivot in the 4-4-2. They will be flanked by Samuel Chukwueze on the right wing and Santi Cazorla on the left. This will help them transition into a 4-2-3-1 or 4-3-3 when pushing forward.

Man-in-form Gerard Moreno will assume responsibility as one of the strikers alongside former Barcelona man Paco Alcacer. Alcacer joined Villarreal in January from Borussia Dortmund after they signed Erling Haaland as their first-choice striker. He has gone on to score four goals in 12 games for the hosts. 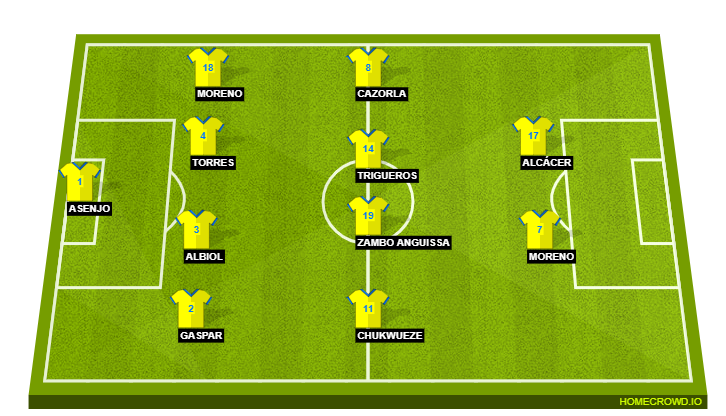 There is one fresh concern for Quique Setien in the form of Samuel Umtiti, who picked up another knee injury in training and could be out for the rest of the season. Frenkie de Jong and Ousmane Dembele continue to miss out because of their respective issues. The former is expected to return in time for the Champions League in August while Dembele’s treatment may take longer.

Antoine Griezmann has played no more than 20 minutes in the last two games combined coming off the bench on both occasions, but is expected to start as the auxiliary striker. He will be playing off of Luis Suarez, who will act as the main striker. Lionel Messi could get his much deserved rest against Villarreal as Barcelona lineup in the 4-3-1-2 Setien played against Atletico Madrid.

In need of a break. (Photo by Ander Gillenea/AFP via Getty Images)

Riqui Puig is expected to continue behind the strikers after his man of the match performance against Diego Simeone’s men. Puig will be joined by Arthur Melo, Sergio Busquets and Ivan Rakitic, who will form the midfield trio behind him. Arturo Vidal completed successive ninety-minute games and will begin the tie against Villarreal from the bench.

Gerard Pique and Clement Lenglet will retain their spots as the starting centre-halves. Ronald Araujo will be the extra man in this position, but is not expected to start. Sergi Roberto should return to the starting lineup at right-back after missing three games because of a rib injury.

Roberto came on for Rakitic in midweek and registered an impressive cameo. The left flank will be filled by Jordi Alba. Marc-Andre ter Stegen will start the game between the posts and will hope his defence gives away no penalties this time. 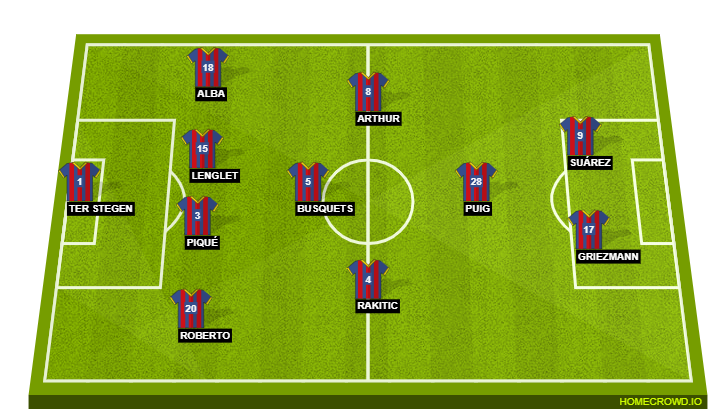 Time to prove a point. (Photo by David Ramos/Getty Images)

If Antoine Griezmann does indeed begin the game in his preferred second-striker role, we can expect him to play a key role against Villarreal. He made that position his own for several years at Atletico Madrid under Diego Simeone, scoring 133 goals. The Frencman has played across the frontline for Barcelona this season, scoring eight goals and providing four assists.

But, the World Cup winner will be extra motivated for Sunday, after he was embarrassingly brought on for less than four minutes against his former club in midweek. He has a point to prove and dismantling the Villarreal defence might be the chance he so desperately craves for.

Tomorrow will be a really difficult game for both the sides. Neither of them have lost a game since the restart and will hope to continue their incredible form tomorrow. We might have a goal-fest on our hands since both clubs have different targets on their mind. Barcelona will want to close the gap to leaders Real Madrid while Villarreal pursue that Champions League spot.

Barcelona will look to get back to winning ways after two draws on the bounce. Moreover, Quique Setien might have a point to prove against Villarreal on Sunday as he seeks his 10th win with the Blaugrana in the league.