Manchester United will continue their push for a top four finish in the Premier League when they welcome Bournemouth to Old Trafford on Saturday.

The action does not stop in the Premier League, with games being played almost every single day. Gameweek 33 is nearly upon us, as we enter the run-in, with Manchester United the first of the ‘Big Six’ teams in action, as they play hosts to Bournemouth at Old Trafford on Saturday afternoon.

Manchester United have been on a resurgent run since the turn of the year, with their last defeat being way back in January. Since that shock loss to Burnley, the Red Devils have been remarkably consistent, having gone 15 games without defeat while conceding just 4 goals in this run. Last time out, Ole Gunnar Solskjaer’s men coasted to a 3-0 win over Brighton & Hove Albion.

Bournemouth, on the other hand, are in desperate need of inspiration right now. The Cherries have the worst form in the division right now, failing to win their last seven games (D1 L6). In fact, since beating Manchester United in November last year, Eddie Howe & co. have won just 2 of their 21 ties in the Premier League and are in real danger of being relegated to the Championship.

The reverse fixture, played at the Vitality Stadium on Gameweek 11, ended in a shock 1-0 win for Bournemouth, with former Manchester United forward Joshua King scoring the only goal of the game. Ahead of the latest meeting between the two sides, The Hard Tackle takes a closer look at the encounter.

Axel Tuanzebe is ruled out for the rest of the season. (Photo by Paul Ellis/AFP/Getty Images)

Ole Gunnar Solskjaer does not have any fresh injury concerns to contend with ahead of his side’s latest fixture. Against Bournemouth on Saturday, the Manchester United boss will be without just two first-team players, with Axel Tuanzebe and Phil Jones still on the sidelines.

In fact, Tuanzebe’s injury-riddled season has been brought to a premature end, with Solskjaer confirming during his pre-match press conference that the young defender is out till September. The manager also confirmed that Ethan Laird is now a part of the first-team squad.

Laird, though, is unlikely to be thrust into the starting lineup just yet, with Aaron Wan-Bissaka going great guns, both in the final third and in defence. In fact, it will be quite surprising if Solskjaer makes any shuffles to his lineup against Bournemouth. After all, why fix something that is not broken?

Indeed, among those who started last time out at Brighton, only Harry Maguire has played every minute of football since the action resumed in England. However, there is no replacing the Manchester United captain, who should have Victor Lindelof as his central defensive partner once again.

Luke Shaw has started each of the four games for Manchester United in the post-lockdown period as well, but was given a breather by being subbed off for Brandon Williams in the previous match. The Englishman should, thus, start on the left side of the defence, with Wan-Bissaka an automatic pick on the right flank. David de Gea will, meanwhile, take his place in goal.

Midfield holds the key for Manchester United, paving the way for much of the success they have enjoyed in the past month or so. Nemanja Matic’s presence ahead of the defence makes all the difference, with the Serb dropping deep to accommodate the marauding full-backs, while also allowing Paul Pogba more time and space on the ball.

Pogba has linked up tremendously well with talisman Bruno Fernandes, who was the star of the show against Brighton. The duo will pull the strings in midfield, enabling the goalscoring abilities of Marcus Rashford, Anthony Martial and Mason Greenwood. The likes of Daniel James and Odion Ighalo will once again be backup options.

Unlike his counterpart in the Manchester United dugout, Eddie Howe has a couple of roster issues hampering his preparations ahead of the trip to Old Trafford. The Bournemouth manager, though, did not mention the players whose fitness he is sweating on.

Apart from the unknown, what is clear is that star striker Callum Wilson will miss out yet again, as he serves the second of his two-match ban. Wilson aside, Bournemouth are also without Charlie Daniels and captain Simon Francis, with both players recovering from their respective knee issues. Finally, Andrew Surman will face a late fitness test to determine his availability.

Meanwhile, Howe could be set to make a host of changes to his side. Steve Cook, in particular, is expected to be omitted after being slammed for his comments in the aftermath of the 4-1 thrashing that Bournemouth received at the hands of Newcastle United in Gameweek 32.

In Cook’s stead, Chris Mepham should be Nathan Ake’s partner at the heart of the Bournemouth defence against Manchester United. Ake would be itching to make an impact, as he did in the reverse fixture, with his future touted to be away from the south coast club. Jack Stacey and Adam Smith will complete the back four, with Aaron Ramsdale set to start between the sticks again.

In front of the defence, the system could be altered slightly, with Howe shifting from a 4-4-2 to a 4-4-1-1 formation. David Brooks could be moved into a central role, playing off of former Manchester United forward Joshua King, who will be the sole striker for Bournemouth. Junior Stanislas and Harry Wilson ought to be the two wide men for the visitors, with Lewis Cook and Jefferson Lerma the two central midfielders. 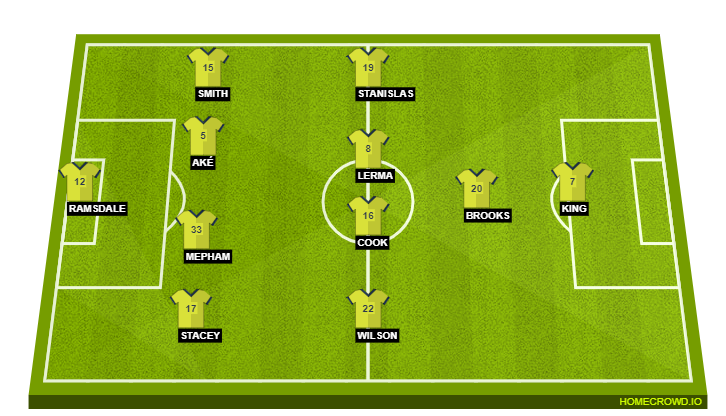 Since football resume, Bruno Fernandes has continued making a direct impact on the proceedings; Paul Pogba has been in inspired form; Anthony Martial scored Manchester United’s first league hat-trick in the longest time; Mason Greenwood just won’t stop making waves. But, if there is one player in the Manchester United juggernaut whose form is a concern, it’s Marcus Rashford.

Yes, Rashford seems to have added elements to his game, with his playmaking, in particular, being a revelation. However, the inspirational youngster seems to be shying away from taking on the opposition defenders for some reason. His scoring boots, too, seem to be missing. In the four games so far, it has indeed only been slow progress on his return from injury for Rashford.

A struggling Bournemouth side, though, should present Rashford with his best opportunity yet to get that scoring feeling back. Aaron Ramsdale just cannot manage to keep the ball out of the net while his defence is as frail as it has ever been since the Cherries’ promotion to the Premier League. So, Rashford could be set to rediscover his best form. It is at least his finest chance to do so.