Arsenal will be hoping to continue their recent winning run when they lock horns with Norwich City at the Emirates on Wednesday.

The elongated Gameweek 32 of the 2019/20 Premier League season continues into the midweek, as the teams involved in the FA Cup this past weekend play their league games. Arsenal are one such outfit, as they go head-to-head with Norwich City at the Emirates on Wednesday night, in what will be their first home game since the resumption of football, following four away fixtures.

Arsenal returned to action after a three-month layoff in the most frustrating of fashions, as they were beaten by Manchester City and Brighton in successive games. However, the Gunners have turned their fortunes around since then, first beating Southampton in the Premier League before progressing to the FA Cup semi-finals at the expense of Sheffield United.

Norwich City, on the other hand, have seen things go from bad to worse. After suffering back-to-back defeats in the Premier League, the Canaries were booted out of the FA Cup after a courageous performance against Manchester United in the quarter-final. However, Daniel Farke & co. seem to be destined for relegation and their fate could be sealed for good soon enough.

The reverse fixture, played at Carrow Road in December last year, ended in a 2-2 draw, with Pierre-Emerick Aubameyang scoring a brace to ensure a share of the spoils between Arsenal and Norwich. Ahead of the latest meeting between the two sides, The Hard Tackle takes a closer look at the encounter.

Luiz could be available after recovering from a knock. (Photo by Shaun Botterill/Getty Images)

Mikel Arteta has seen his squad options improve considerably over the week and could have nearly all of his troops available soon. Against Norwich City on Wednesday, the Arsenal manager will be without just four first-team players, with four others training this week to be in contention.

Those who definitely miss out for Arsenal are Bernd Leno (knee), Calum Chambers (knee), Pablo Mari (ankle) and Gabriel Martinelli (knee). The likes of David Luiz, Lucas Torreira and Mesut Ozil will face late fitness tests to determine their availability, while Cedric Soares is finally available to make his Arsenal debut.

Cedric, though, will have to wait to make his first start for Arsenal, with Hector Bellerin expected to start as the right-back for the hosts. Apart from Bellerin, Arteta will likely recall a number of first-team regulars against Norwich, after allowing some of them a breather last time out.

In addition, Arteta should also shuffle his formation, reverting to the 4-3-3, with Bukayo Saka deployed as the auxiliary central midfielder. Saka will have Dani Ceballos, who scored the winning goal against Sheffield United, and Granit Xhaka for company in the middle of the park.

Behind the three-man midfield, Rob Holding will pair up with Shkodran Mustafi at the heart of the Arsenal defence, with Kieran Tierney expected to start as the left-back. In Leno’s absence, Emiliano Martinez will man the goal once again and will be hoping to keep another clean sheet after Southampton last week.

Speaking of performance against Southampton, Eddie Nketiah performed admirably once again and will return to the starting lineup to lead the line for Arsenal. Nicolas Pepe and Pierre-Emerick Aubameyang will be the two wide men, with Aubameyang, in particular, desperately in need of some inspiration.

Unlike his counterpart in the Arsenal dugout, Daniel Farke has seen his problems mount in the past week. On Wednesday, the Norwich City manager could be without as many as eight first-team players, with defence especially posing a major concern.

The problem escalated against Manchester United, as Timm Klose was sent off late in the game. With Klose suspended, Farke will need to rely on a makeshift centre-back against Arsenal, with Alexander Tettey dropping into the heart of the Norwich defence.

Tettey will have Ben Godfrey as his central defensive partner, with Grant Hanley and Christoph Zimmermann out on the sidelines. Meanwhile, the continued absence of Sam Byram means Max Aarons and Jamal Lewis will be the full-backs once again. The excellent Tim Krul will take his place between the sticks.

Up ahead in midfield, Tettey’s absence should be filled by Mario Vrancic, who will likely starting alongside Kenny McLean in the double pivot. Meanwhile, with Lukas Rupp facing a late fitness test to determine his availability, Ondrej Duda is expected to reprise the no. 10 role.

Duda will play off Teemu Pukki, who needs to rediscover his form from the early stages of the season. Todd Cantwell’s availability was in question ahead of the game, but the young winger has recovered from a knock. Cantwell, though, could make way for Onel Hernandez, with Emiliano Buendia starting on the right flank. 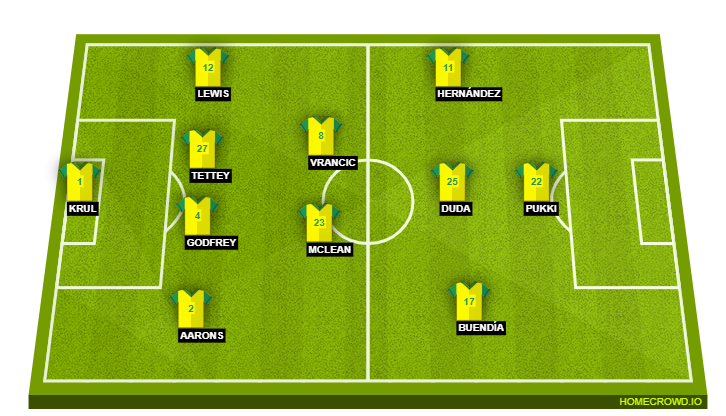 Time to step up further. (Photo by Shaun Botterill/Getty Images)

While all eyes will once again be on Pierre-Emerick Aubameyang to see if he can arrest his slump and get back to goalscoring ways, there is another player who can also do with a goal. After scoring against Sheffield United this past weekend, Pepe now needs to do so consistently.

Far too often this season, the Ivorian has gone cold just when it has looked that he is starting to justify his huge price tag. With Arsenal still in with a slim chance to make it to the Europa League, the time is now for Pepe to start delivering, especially with his captain not in the best of form.

Arsenal have hardly looked the part since the resumption of football in England. However, after the 2-0 win at Southampton, there have been some positive signs on show. For one, Mikel Arteta is forging a squad that surely has the stomach to fight till the very last moment in the game.

Now, though, with a struggling Norwich City paying a visit to the Emirates, the Gunners have the chance to get back some more of their lost form. For all intents and purposes, it seems like that is exactly what will happen, with Nicolas Pepe and Pierre-Emerick Aubameyang likely to make some sort of an impact. The Hard Tackle, thus, predicts a 2-0 win for Arsenal.