A blockbuster clash is on the cards in the Serie A as AC Milan welcome AS Roma to San Siro this Sunday, hoping to keep their European hopes alive.

There is no shortage of footballing action across Europe and the same is the case with Serie A. On Sunday, there are as many as six matches on show, with the day’s proceedings starting at San Siro, where AC Milan will play hosts to AS Roma, hoping to keep their chances of qualifying for the UEFA Europa League alive.

AC Milan have endured a hit and miss campaign so far, first struggling under Marco Giampaolo before slowly finding stable ground under the tutelage of Stefano Pioli. Pioli, too, has overseen an inconsistent side, though, with the Rossoneri taking two steps forward and one back. However, on their return to action last week, Milan recorded a 4-1 win over Lecce.

AS Roma, on the other hand, have made decent progress since Paulo Fonseca took charge and are in with a chance to qualify for the UEFA Champions League after a gap of one year. Currently, the Giallorossi are fifth on the Serie A table with 48 points, six behind Atalanta. The visitors resumed their campaign earlier this week with a 2-1 comeback win over Sampdoria.

The reverse fixture, played at Stadio Olimpico back in October last year, ended in a 2-1 win for Roma, with Edin Dzeko and Nicolo Zaniolo on target, while Theo Hernandez scored the consolation goal for Milan. Ahead of the latest fixture between the two sides, The Hard Tackle takes a closer look at the encounter.

Zlatan Ibrahimovic misses out for AC Milan due to injury. (Photo by Alberto Pizzoli/AFP via Getty Images)

Stefano Pioli has just one fresh injury concern hampering his preparations ahead of the visit of AS Roma. The AC Milan manager is sweating over the fitness of Simon Kjaer, who picked up a minor knee injury in the win over Lecce last time out.

Fortunately for Pioli and Milan, though, the Danish defender did not damage his ligaments and could be in contention to feature against Roma. Having said that, Pioli is unlikely to take a chance with Kjaer, especially with games coming thick and fast. And, with Leo Duarte not being fully fit and Mateo Musacchio still unavailable, Matteo Gabbia should make a rare appearance in the side.

Gabbia will pair up with captain Alessio Romagnoli at the heart of the AC Milan defence. The duo will be flanked by the full-back pairing of Andrea Conti and Theo Hernandez, both of whom will carry a great deal of threat down their respective flanks. Gianluigi Donnarumma will, meanwhile, start between the sticks, in all likelihood.

The performance of the two players in the midfield double pivot will play a big role in determining whether Milan can topple Roma on the day. Franck Kessie and Ismael Bennacer will partner each other in the middle of the park.

Bennacer, who has been linked with Real Madrid and Manchester City lately, will hold the fort in front of defence, while Kessie looks to transition from defence to attack quickly. Giacomo Bonaventura was deployed in an advanced position last time out and did exceedingly well in his new role.

The Italian international should start in attack once again, with Hakan Calhanoglu given a free role behind the central striker, who ought to be Ante Rebic once again, seeing as Zlatan Ibrahimovic is still not fully fit. Samu Castillejo will start on the right flank, completing the attack. 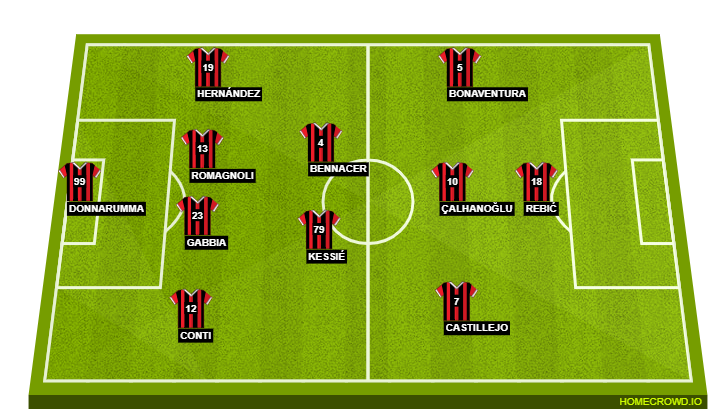 Unlike his counterpart in the AC Milan dugout, Paulo Fonseca is without the services of just one first-team player. On Sunday, the AS Roma manager will be without just Pau Lopez, who remains on the sidelines due to a wrist injury.

In the absence of Lopez, Antonio Mirante will be deployed in the AS Roma goal, with the Italian doing a decent job so far. Much like Stefano Pioli’s AC Milan side, Fonseca will line his side up in a 4-2-3-1 formation, with the two wingers drifting in to create overloads and allow the full-backs to provide width as well as crossing opportunities.

With a near full-strength squad at his disposal, the AS Roma boss is expected to keep his troops fresh, with rotation expected in the final third. As far as defence is concerned, Chris Smalling will have the fit-again Gianluca Mancini as his central defensive partner. Enterprising duo Davide Zappacosta and Aleksandar Kolarov will be the two full-backs for Roma.

Up ahead in midfield, Jordan Veretout should keep hold of his place, playing the anchor man role in the double pivot. Veretout, though, should have a new partner in Bryan Cristante, with the 25-year-old being the workhorse in the middle of the park.

Edin Dzeko will lead the line for AS Roma against AC Milan and although Fonseca has downplayed his importance, it goes without saying that he will be the most vital player for the visitors.

Dzeko will have a brand new support cast behind him, with Justin Kluivert and Cengiz Under being the two wide men, while Lorenzo Pellegrini will reprise the no. 10 role. The likes of Carles Perez, Javier Pastore and Henrikh Mkhitaryan will be among the backup options, to be used later on in the game. 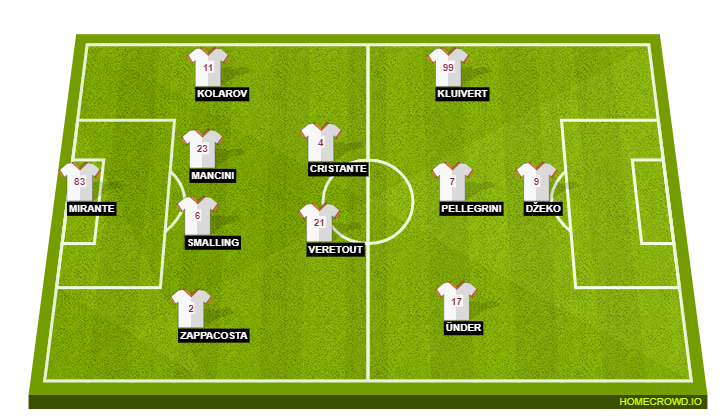 In a difficult season for AC Milan, very few players have managed to stand out, especially in the final third, with goals coming few and far between. Of late, though, one player who has given a good account of himself, more often than not, is Ante Rebic.

The Croatian international has stepped out of the shadows of Zlatan Ibrahimovic since the Swede’s arrival at San Siro and looked in fine touch in Milan’s first Serie A game back. With Ibrahimovic still on the sidelines, Rebic’s output will hold the key against AS Roma, as Milan look to build a good run to end the season with European qualification.

AC Milan looked to be in their elements on their return to Serie A action and will be buoyed coming into this weekend’s fixture. AS Roma, on the other hand, had to sweat it out in order to grab all three points against Sampdoria. The confidence derived from their respective outings could play a big role in the final result on Sunday.

AC Milan have slowly grown into the season, but defence still remains a source of concern for the Rossoneri. Roma, meanwhile, have a strong recent head-to-head record against their hosts. Having said that, an improved Milan midfield should keep the visitors in check.

All things considered, this looks like a match in which the two teams will be hard to separate throughout. With that in mind, The Hard Tackle predicts this match to end all square, with Milan holding Roma to a 1-1 draw.