A place in the FA Cup semi-finals will be on the line when Norwich City welcome Manchester United to Carrow Road on Saturday.

FA Cup action resumes for the first time since March, with the quarter-finals slated to be played this weekend. Only one game will be played on Saturday, when Manchester United take on Norwich City, with a place in the penultimate stage of the competition up for grabs.

Norwich City have endured a 2019/20 campaign from hell, as they look set to drop down to the Championship after just one season in the Premier League. The story in the FA Cup, though, has been much more positive, with the Canaries beating Preston North End, Burnley and Tottenham Hotspur enroute to the quarter-finals.

For Manchester United, on the other hand, it has been a season that has promised a lot. The Red Devils are in contention for a top four finish in the Premier League, reached the semi-finals of the Carabao Cup and are still alive in the UEFA Europa League as well. In the FA Cup, Ole Gunnar Solskjaer’s men have beaten Wolves, Tranmere Rovers and Derby County so far.

Norwich and Manchester United have already locked horns twice this season, in the Premier League, with the Red Devils winning both fixtures by an aggregate scoreline of 7-1. Ahead of the latest meeting between the two sides, The Hard Tackle takes a closer look at the FA Cup encounter.

Daniel Farke will rely on his hit-man Teemu Pukki to produce the goods on Saturday. (Photo by Jordan Mansfield/Getty Images)

Daniel Farke does not have any fresh injury concerns on his hands ahead of the visit of Manchester United. On Saturday, the Norwich City manager will be without three first-team players at the very least, with Josip Drmic facing a late fitness to determine whether he has recovered completely from his ankle injury and is fit enough to be involved.

The ones who will be unavailable for the Canaries against Manchester United are Grant Hanley, Christoph Zimmermann and Sam Byram, with all three suffering from thigh injuries that have ruled them out for the remainder of the season.

The absence of the three defenders means that Farke has little room for rotation in the back-line, meaning Max Aarons, Ben Godfrey, Timm Klose and Jamal Lewis will start in the four-man defensive unit once again. The back four will protect Tim Krul, who will be a key figure for Norwich against Manchester United.

The rest of the team, though, should have an entirely new look, starting with the midfield double pivot. Tom Trybull and Moritz Leitner will pair up in the middle of the park, with Trybull holding the fort in front of the back-line and Leitner connecting with attack.

Teemu Pukki, Todd Cantwell and Emiliano Buendia all started on the bench earlier this week against Everton and should return to the starting lineup. The trio will be Norwich’s best hope of producing a shock result on Saturday. Cantwell and Buendia will be the two wide men, with Pukki leading the line against Manchester United. Marco Stiepermann will play off the Finn. 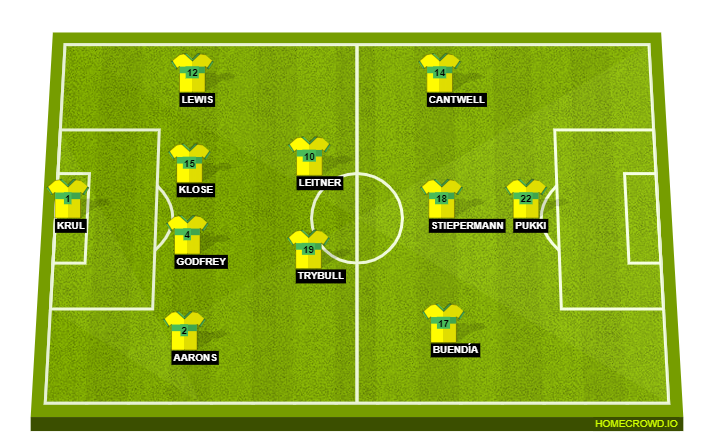 Like his counterpart in the Norwich City dugout, Ole Gunnar Solskjaer is not being hampered by any new roster issues ahead of his side’s fixture in the FA Cup. On Saturday, the Manchester United manager will be without just two first-team players, with Axel Tuanzebe and Phil Jones still out injured.

With the luxury of having a near full strength squad at his disposal, Solskjaer should name nearly a fresh starting lineup against Norwich. The first change will come in goal, with Sergio Romero coming in for David de Gea to take his customary place in goal in a cup fixture.

In defence, captain Harry Maguire should be the only player to retain his place. Maguire should be partnered by Eric Bailly at the heart of the Manchester United defence, with Diogo Dalot and Brandon Williams being the two full-backs for the visitors.

Up ahead in midfield, Scott McTominay and Fred are certain starters, with Paul Pogba and Nemanja Matic being given a breather. Bruno Fernandes should, meanwhile, make way for Andreas Pereira, who will reprise the no. 10 role for Manchester United.

Pereira will play off Odion Ighalo, who will lead the line for Manchester United against Norwich. The two wide men for the Red Devils ought to be Daniel James and Juan Mata, with Jesse Lingard expected to make an appearance off the bench. Anthony Martial, the hat-trick hero last time out, will be on the bench, along with Marcus Rashford and Mason Greenwood.

Will Ighalo make a mark once again? (Photo by Clive Brunskill/Getty Images)

It has been a dream come true for Ighalo, playing for the club he has supported since he was a kid. So far in his Manchester United career, the Nigerian has been in fine touch, finding the back of the net four times already at a superb rate of 85 minutes per goal.

His presence in the squad also allows Ole Gunnar Solskjaer the luxury of rotating efficiently, especially at a time when the games are coming thick and fast. Ighalo’s performance will hold the key against Norwich City on Saturday, as Manchester United look to progress to the semi-finals. If he can manage to continue his fine run, then United will have a field day at Carrow Road.

This is a match in which Norwich City could fancy their chances, with Ole Gunnar Solskjaer set to name a largely second string side. Having said that, the Manchester United defence should still be good enough to keep the Canaries quiet for the most part, especially with the energetic duo of Fred and Scott McTominay playing ahead of them.

Sergio Romero has made a habit of keeping clean sheets whenever he plays and the same should be the case on Saturday as well. On the opposite end, Odion Ighalo should find a way to make the difference once again, with the likes of Juan Mata and Andreas Pereira impressing as well. The Hard Tackle, thus, predicts a 2-0 win for Manchester United to progress to the FA Cup semis.