Arsenal will be desperate to get their first win since the resumption of Premier League, when they face Southampton at St. Mary’s on Thursday.

Gameweek 31 of the 2019/20 Premier League season will reach its conclusion on Thursday, with three matches on show. All eyes will invariably be on the final game on the day, where Chelsea will host Manchester City. Before that, though, an interesting fixture will have Southampton take on Arsenal at St. Mary’s.

Southampton have shown promising signs in a season that started on a worrying note and included that 9-0 hammering at home against Leicester City. However, the Saints have slowly, but surely, taken to Ralph Hasenhuttl’s ways and will fancy a top half finish. Southampton were rampant on their return to action last week, beating Norwich City 3-0, with Danny Ings the star of the show.

For Arsenal, on the other hand, 2019/20 has been a season to forget. After sacking Unai Emery, the Gunners appointed Mikel Arteta as their new head coach. While there have been definitive improvements under the Spaniard, the north Londoners have received a major setback on their return after a three-month break, losing each of their two games so far.

The reverse fixture, played at the Emirates back in November, ended in a 2-2 draw, with Ings and James Ward-Prowse scoring for Southampton, while Alexandre Lacazette netted a point-saving brace for Arsenal. Ahead of the latest meeting between the two sides, The Hard Tackle takes a closer look at the encounter.

Ralph Hasenhuttl has a near-full strength squad at his disposal. (Photo by Dan Mullan/Getty Images)

Ralph Hasenhuttl does not have any injury concerns hampering his preparations ahead of the visit of Arsenal. On Thursday, the Southampton manager will only be without one first-team player, as Moussa Djenepo continues to serve his suspension after being sent off against Newcastle United in March.

Meanwhile, Hasenhuttl should line his side up in a 4-4-2 formation once again, with Alex McCarthy taking his customary place in goal. McCarthy will be guarded by a back four of Jack Stephens, Jan Bednarek, Yan Valery and Ryan Bertrand. Stephens and Bednarek will pair up at the heart of the Southampton defence, while Valery and Bertrand will be the two full-backs.

Nathan Redmond was in fine touch last weekend and should start on the left side of the four-man midfield. Redmond will provide the forward impetus from the midfield, and with Stuart Armstrong on the other flank, he will look to create overloads in the central areas to support the two strikers.

The double pivot in the middle of the park will have Pierre-Emile Hojbjerg, who will sit deep and cover the back-line, and newly-appointed captain James Ward-Prowse, who will provide the creative spark from central positions, while also posing a threat with set-pieces.

Upfront, there is no looking past the partnership of Danny Ings and Michael Obafemi. Ings will be the biggest threat for Southampton against Arsenal, with the Englishman hoping to resume his bid to win the Golden Boot. The likes of Che Adams, Shane Long and Sofiane Boufal will be the backup options for Hasenhuttl to consider. 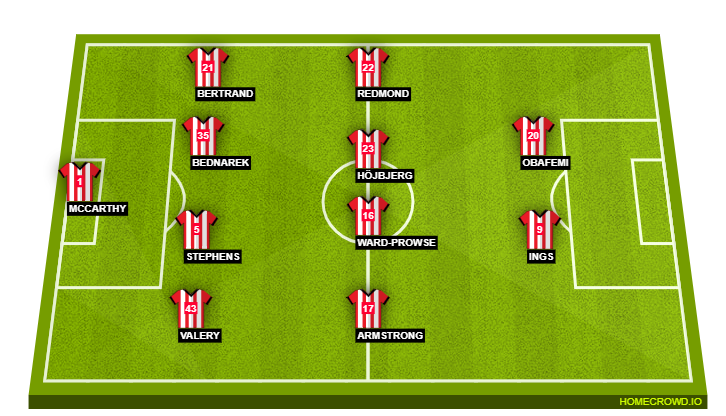 Unlike his counterpart in the Southampton dugout, Mikel Arteta has a barrage of fitness issues to deal with ahead of his side’s latest fixture. On Thursday, the Arsenal manager could be bereft of the services of as many as nine first-team players.

The likes of Pablo Mari, Calum Chambers, Bernd Leno and Gabriel Martinelli are unlikely to play a part for Arsenal once again this season. Former Southampton defender Cedric Soares and Lucas Torreira are also ruled out, while David Luiz, who signed a new deal with the Gunners this week along with Mari and Cedric, misses out due to suspension.

Finally, Sokratis Papastathopoulos and Granit Xhaka will face late fitness tests to determine their availability. Neither player might start, though, with Shkodran Mustafi and Rob Holding likely to be the central defensive pairing. Dani Ceballos will continue to partner Matteo Guendouzi in the midfield double pivot, with Mesut Ozil being recalled and given a free role as the No. 10.

Mustafi and Holding will be joined by Hector Bellerin and Kieran Tierney in the Arsenal back-line, which will guard Emiliano Martinez, the replacement for Leno for the remainder of the season, in goal.

Pierre-Emerick Aubameyang has looked desperately anonymous in the left wing berth so far in the two games and could be deployed through the middle, with Eddie Nketiah and Alexandre Lacazette being backup strikers. If Aubameyang starts upfront, Bukayo Saka will start in his preferred left wing slot, with Nicolas Pepe stationed on the right.

Will Ings continue his fine run against Arsenal? (Photo by Laurence Griffiths/Getty Images)

After finally managing to shake off the frustrating injury troubles that plagued his Liverpool career, Ings has been enjoying a stunning 2019/20 season. A major reason for Southampton practically ensuring safety for another season, the English striker has been nothing short of phenomenal this term.

The next club standing in way of winning the Golden Boot are Arsenal, against whom he has had some fine performances of late. With the Gunners’ defence being one of the most vulnerable in the Premier League, Ings could put in another dominant display, and maybe even ensure a big result for Southampton.

This one is a rather intriguing match-up. Southampton have the worst home record in the Premier League, while Arsenal have managed to win just 2 away games all season. So, for all intents and purposes, this appears to be a game that could well end all square.

Arsenal, though, have hardly posed a threat in front of goal and unless they play Pierre-Emerick Aubameyang through the middle, they could be in for another long evening. Southampton, on the other hand, have Danny Ings in the form of his life and the former Liverpool man could torment the Gunners’ defence.

All things considered, this does look like a match in which the spoils could be shared. With that in mind, The Hard Tackle predicts a 2-2 draw, a result that will be another blow to Arsenal’s hopes of qualifying for the UEFA Europa League.