Inter Milan will be eager to build on their win this past weekend when they welcome Sassuolo to San Siro on Wednesday night.

The action is not slowing down one bit all across Europe, with the latest matchday also getting underway in Serie A. Inter Milan will be in action on Wednesday night, when they play hosts to Sassuolo, looking to take one more step in their bid to lock down a place in the Champions League next season.

Inter Milan have raised their levels since the appointment of Antonio Conte. The Nerazzurri have certainly bridged the gap to Juventus, but they have drifted away from the Serie A title picture after a strong start to the season, when they even led the table. Since the resumption of football in Italy, the hosts have played twice, drawing one game before beating Sampdoria 2-1 last weekend.

Sassuolo, on the other hand, have endured a blow-hot-blow-cold campaign so far, winning just 9 of their 26 games till date. Their recent form has been much improved, with the Black and Greens winning three of their last five games, although they returned to action this past weekend with a 4-1 hammering at the hands of Atalanta.

The reverse fixture, played at the Mapei Stadium, was an exciting fixture which had ended in a 4-3 win for Inter Milan, with Sassuolo threatening with a late comeback. Ahead of the latest meeting between the two sides, The Hard Tackle takes a closer look at the encounter.

Antonio Conte has a few injury concerns hampering his preparations ahead of the visit of Sassuolo. On Wednesday, the Inter Milan manager will be without three first-team players, with midfield presenting him with pretty much all of his issues.

Marcelo Brozovic is one of the three players unavailable to take on Sassuolo, with the Croat joining Stefano Sensi and Matias Vecino on the sidelines. The good news, though, is that Diego Godin is likely to be fit enough to return to the starting lineup.

Godin will provide company to Stefan de Vrij and Milan Skriniar in the three-man central defensive unit, with the trio guarding Inter Milan captain Samir Handanovic in goal. Antonio Candreva and Ashley Young will, meanwhile, likely be the two wing-backs once again for the hosts.

In the absence of Brozovic, Roberto Gagliardini becomes a certain starter in the middle of the park alongside Nicolo Barella, who will provide the forward thrust from midfield. The third midfielder for Inter Milan should be Christian Eriksen, who has settled in well at the club.

Eriksen ought to play off the strike partnership of Romelu Lukaku and Lautaro Martinez, meaning Alexis Sanchez will start on the bench once again for Inter Milan. Apart from Sanchez, the likes of Victor Moses, Kwadwo Asamoah and Borja Valero will be among the backup options on the bench for Conte. 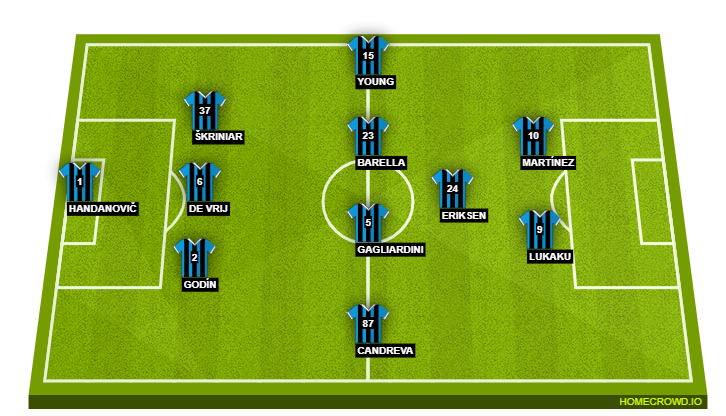 Like his counterpart in the Inter Milan dugout, Carlo Rossi has quite a few roster issues to deal with before his side’s next fixture. On Wednesday, the Sassuolo manager will be without three first-team players as well.

The big worry for the visitors will be the absence of Jeremy Toljan, who picked up an injury on the weekend. Toljan joins Filippo Romagna and Marlon Santos on the sidelines, with the latter suspended after being booked for the fifth time in Serie A this season.

Defence, therefore, is the area where Rossi needs to pay the most attention. Mert Muldur should replace Toljan, while the suspended Marlon’s place is expected to be taken up by Gian Marco Ferrari, who will likely have Vlad Chiriches as his partner at the heart of the Sassuolo defence.

Greek defender Giorgios Kyriakopoulos will be the left-back for the Black and Greens, with Andrea Consigli taking his place between the sticks. In midfield, Pedro Obiang will start alongside former AC Milan midfielder Manuel Locatelli. Obiang will be tasked with keeping things tight in the middle of the park, while Locatelli will provide the creative impetus.

Sassuolo’s key man in attack will invariably be Domenico Berardi, who will hope to make the difference from the right flank. Filip Djuricic will play off central striker Francesco Caputo, who will lead the line against Inter Milan, while Jeremie Boga will be stationed on the left wing. 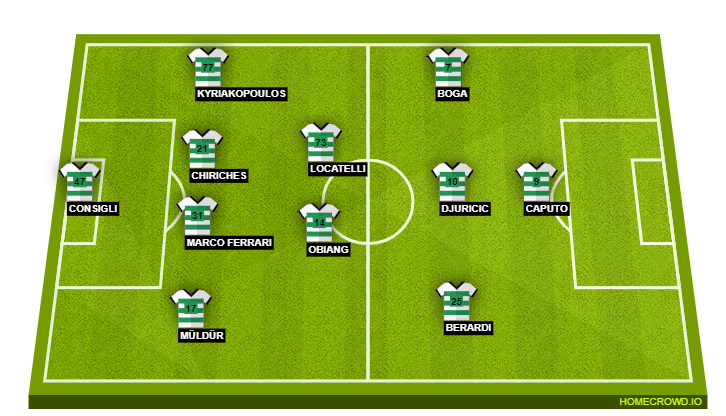 Eager to make an impact. (Photo by Emilio Andreoli/Getty Images)

Eriksen might have joined Inter Milan midway through the season, but he has taken little time to adjust to his new surroundings. After finally ending his time at Tottenham earlier this year, the Dane looks intent on making an impact in Italy.

He has done exactly that since football resumed in the country, first scoring a bizarre goal straight from a corner before being instrumental in the Nerazzurri’s win over Sampdoria last weekend. Eriksen will need to continue being at his creative best if he is to help Inter end the season on a high, following a few weeks riddled with inconsistency.

Inter Milan have not been entirely fluent, with their defence proving to be rather suspect since the resumption of football. However, the return of Diego Godin should come as a shot in the arm for the hosts, who should improve drastically at the back.

Sassuolo, on the other hand, were played out of the park by Atalanta last time out and could be in for another difficult evening on Wednesday. With Romelu Lukaku, Lautaro Martinez and Christian Eriksen looking in good touch, this should be a fairly straightforward evening for Inter Milan. The Hard Tackle, therefore, predicts a 2-0 win for Antonio Conte & co.