Barcelona will be desperate to get back to winning ways and reclaim top spot on the La Liga table when they face Athletic Bilbao at Camp Nou on Tuesday.

The games continue to come thick and fast in La Liga, with Matchday 31 of the 2019/20 season set to begin just a day after the end of the previous round of fixtures. Reigning champions Barcelona will be in action on Tuesday night, when they play hosts to Athletic Bilbao at Camp Nou.

Barcelona have been engaged in a see-saw battle for the La Liga title this season with Real Madrid, with the two sides exchanging the top spot all through the season. The latest twist in the tale came this past weekend, as failure to beat Sevilla coupled with Los Blancos‘ 2-1 win over Real Sociedad meant the Catalans have now dropped to second on the table.

Athletic Bilbao, on the other hand, have enjoyed a decent 2019/20 campaign in La Liga, with the Basque club in contention to qualify for Europa League, with an outside chance to make it to the Champions League as well. In fact, only four sides have lost fewer games than Los Leones, who are unbeaten in their last five games and are ninth in the standings.

The reverse fixture, played at San Mames on the opening weekend, ended in a 1-0 win for Bilbao, with Aritz Aduriz scoring a spectacular goal from an overhead kick, in what would be the final strike of his career. Ahead of the latest meeting between the two sides, The Hard Tackle takes a closer look at the encounter.

Quique Setien does not have any fresh injury concerns hampering his preparations ahead of the visit of Athletic Bilbao. On Tuesday, the Barcelona manager will continue to be without three first-team players, with Frenkie de Jong the major absentee.

The Dutchman’s absence was felt dearly by Barcelona last time out, with the Blaugrana largely playing lateral passes instead of penetrating the opposition defence vertically. This problem should be solved by Arthur, who is expected to start after being benched last time out.

Arthur should replace Ivan Rakitic in the side, with Arturo Vidal retaining his place, owing to the fact that he supports Lionel Messi better, especially on the defensive front. The third spot in the middle of the park will invariably be taken by Sergio Busquets. Meanwhile, apart from de Jong, Sergi Roberto and Ousmane Dembele are the only other players unavailable.

With Roberto still sidelined, Nelson Semedo will get another chance to impress, having done so on the weekend against Sevilla as well. Semedo should start in the same back four as last weekend, with Jordi Alba on the left flank, while Gerard Pique and Clement Lenglet will pair up at the heart of the Barcelona defence once again.

In goal, there is no replacing Marc-Andre ter Stegen, with the German eager to keep a fifth clean sheet in a row. On the opposite end, Lionel Messi will start again, even though he looked out of sorts and in need of some rest.

Messi will be deployed on the right side of the Barcelona attack, with Antoine Griezmann and Ansu Fati providing him company. Martin Braithwaite and Luis Suarez, therefore, drop down to the bench, with Suarez, in particular, being eased into becoming a regular again after a long time out on the sidelines.

Unlike his counterpart in the Barcelona dugout, Gaizka Garitano does not have a single player missing out due to injury troubles. The only player unavailable for Athletic Bilbao this weekend is Yuri Berchiche, who is serving a one-match ban for accumulation of yellow cards.

Garitano should line his side up in his typical 4-2-3-1 formation, with Unai Simon starting in goal yet again. Ander Capa will be the visitors’ right-back, with Mikel Balenziaga coming into the side for the suspended Berchiche. Unai Nunez and Inigo Martinez will combine  in the middle of the defence.

The midfield double pivot will contain Dani Garcia, who will sit in the middle of the park alongside Mikel Vesga. The duo will primarily be tasked with containing their Barcelona counterparts, before moving the ball forward.

The third midfielder from Bilbao will be captain Iker Muniain, who will be given the freedom to roam in the final third. Muniain will play off Raul Garcia, who has reinvented himself as a striker this season. The attack will be completed by Inaki Williams and Inigo Cordoba, with the duo providing the width against Barcelona. 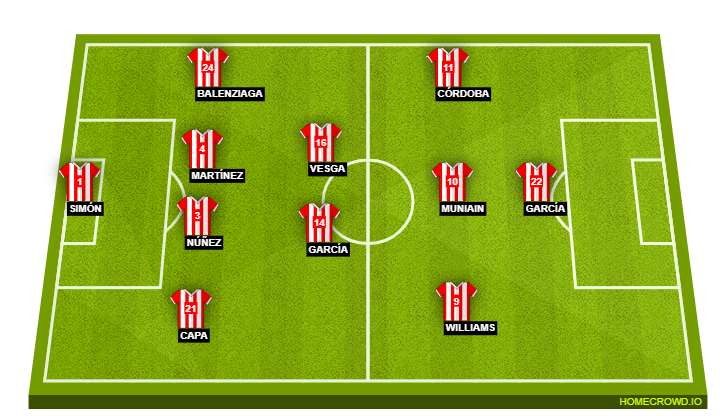 This is a time of uncertainty for Arthur Melo, whose future at Camp Nou seems to be up in the air, with the rumours surrounding him and Miralem Pjanic intensifying. With a transfer still not set in stone, the run-in is Arthur’s chance to make the final impression on Quique Setien and forge a place for himself in the side.

In the immediate future, the absence of Frenkie de Jong means he is the only recognised Barcelona midfielder who has the capability of splitting open the opposition defence, a quality he must use to good effect against Athletic Bilbao, not just to inspire the hosts to a win but also help his own cause.

This is quite an intriguing match-up to say the least. Athletic Bilbao have returned to action in a decent run of form, while Barcelona seem to be lacking the cutting edge to blow away sides, with the players still not accustomed to the system of Quique Setien.

So, this seems to be the perfect moment for Bilbao to end their run of winless results against the La Liga champions. Having said that, Lionel Messi gives Barcelona the edge as always, although this time around, the scales are unlikely to be tipped fully. The Hard Tackle, therefore, predicts a 1-1 draw to be the final result of the game.