Barcelona will be eager to remain perched atop the La Liga table when they lock horns with Sevilla at the Ramon Sanchez Pizjuan Stadium on Friday.

The games continue to come thick and fast in La Liga, with one fixture on show just about everyday. Reigning champions Barcelona will be back in action on Friday night, when Sevilla host them at the Ramon Sanchez Pizjuan Stadium, in what is perhaps the Catalans’ most important outing from now till the end of the season.

Sevilla have been in fine touch under the tutelage of Julen Lopetegui this season, with their results turning for the better since the turn of the year. Los Nervionenses have lost just two games in all competitions so far in 2020, with their last defeat coming in February. Since the resumption of La Liga, they have won one fixture and drawn one and are currently third on the table.

Barcelona, on the other hand, have blown hot and cold by their enormous standards in the current campaign, as a result of which the defending champions let go of Ernesto Valverde. Their record on the road is rather horrendous, with the Blaugrana winning just 6 of their 14 away games, with an abysmal goal difference of +3. They have, however, won each of their two matches upon returning to action.

The reverse fixture, played at Camp Nou way back in October last year, ended in a 4-0 win for Barcelona, with Luis Suarez, Arturo Vidal, Ousmane Dembele and Lionel Messi on target. Ahead of the latest meeting between the two sides, The Hard Tackle takes a closer look at the encounter.

Julen Lopetegui has all his men available to him. (Photo by Juan Manuel Serrano Arce/Getty Images)

Julen Lopetegui does not have any major injury concerns hampering his preparations ahead of the visit of Barcelona. On Friday, the Sevilla manager could have the luxury of having a full-strength squad at his disposal.

Lopetegui will likely set his side up in a 4-3-3 formation, with Tomas Vaclik taking his customary place in goal. Vaclik will be protected by a back four, which should see a solitary change, with Sergio Reguilon coming in for Sergio Escudero at left-back.

The Real Madrid loanee will have the Jesus Navas, Jules Kounde and Diego Carlos, who has been linked with a move to Liverpool, for company in the defensive line. Navas will take his place on the right side of the defence, while Kounde and Carlos will form Sevilla’s central defensive partnership.

In midfield, Fernando could return to the starting lineup, with the 32-year-old playing the Anchor Man role for Sevilla. Fernando will be partnered by Ever Banega and Joan Jordan in the middle of the park, with the former providing the creative impetus, while the latter will be the workhorse supporting Fernando.

Up ahead in attack, Luuk de Jong is expected to continue leading the line for Sevilla. Lucas Ocampos, who has arguably been Sevilla’s best player this season, will start on the right wing, with ex-Barcelona forward Munir El Haddadi completing the starting lineup. 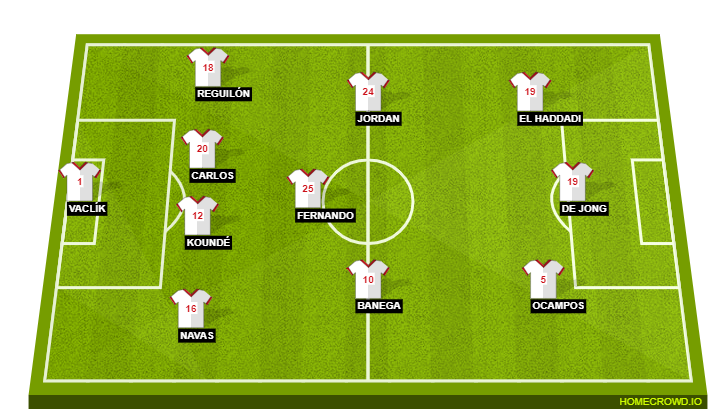 Quique Setien has a couple of new fitness issues to contend with ahead of his side’s latest fixture. Against Sevilla on Friday, the Barcelona manager will be without three first-team players, with Sergi Roberto and Frenkie de Jong ruled out of the game, while Ousmane Dembele is a long-term absentee.

The absence of the duo forces Setien’s hand a bit, with Nelson Semedo now a certain starter as the right-back. On the opposite flank, Jordi Alba is expected to return to the lineup after serving his suspension. Junior Firpo did a solid job in Alba’s absence, but the veteran full-back is an automatic pick when fit and available.

Clement Lenglet looked in fine touch last time out and will keep his place at the heart of the Barcelona defence, with Gerard Pique his partner. The Barcelona backline will once again provide cover to Marc-Andre ter Stegen, who will face a tricky time between the sticks.

With de Jong unavailable, Setien will have to pick two midfielders between Ivan Rakitic, Arturo Vidal and Arthur to be Sergio Busquets’s partner in the middle of the park. Rakitic did extremely well against Leganes and should retain his place. Vidal, though, should come in for Athur, who was underwhelming in the midweek tie.

Finally, in attack, Lionel Messi is the first name on the team sheet and the Barcelona captain will be looking to continue from where he left off against Leganes. Antoine Griezmann produced a much improved display in that game and will start in the final third. Martin Braithwaite should also start after scoring his first goal in Barcelona colours last weekend.

With Braithwaite starting, Luis Suarez and Ansu Fati will be the backup options when it comes to attack. Riqui Puig, who impressed after coming off the bench in midweek, and Arthur are the fallback options in midfield.

The spotlight will invariably be on Lionel Messi and Antoine Griezmann, but in the absence of Frenkie de Jong, there needs to be one player who takes more responsibility in midfield. With Arthur not really in full flow since La Liga’s return last week, Ivan Rakitic will have take on the creative onus for Barcelona.

A player who often cops a lot of criticism from the Barcelona fanbase, Rakitic has returned to action in solid fashion and if he can continue his form, he could make a great deal of difference against former club Sevilla. While he is expected to leave when the season ends, a good few performances from now till the end of the campaign could help him attract a top club.

As iterated earlier, this is perhaps the most difficult fixture that Barcelona are going to play from now till their La Liga campaign ends. And so, taking home three points from this fixture is imperative for the Blaugrana. Having said that, Sevilla will be no pushovers and are likely to give the champions a run for their money.

With the hosts themselves in a tricky position when it comes to the top four race, they know that they need every possible point to keep their place on the table intact. Add to it Barcelona’s miserable away record and the signs only point towards a stalemate. With that in mind, The Hard Tackle predicts a 1-1 draw, with Lionel Messi possibly scoring the 700th goal of his career.