Real Madrid will be eager to keep pace with Barcelona when they lock horns with Valencia at the Alfredo Di Stefano Stadium on Thursday.

The games continue to come thick and fast in La Liga, with a match being played practically everyday. The proceedings on Thursday will be completed in the Spanish capital, as Real Madrid play hosts to Valencia at the Alfredo Di Stefano Stadium, hoping to grab three points once again.

Real Madrid have been neck and neck with Barcelona in the title race pretty much all through the season. Currently, Los Blancos are five points behind the defending La Liga champions and kept pace with their rivals last weekend, beating Eibar 3-1 courtesy a fantastic first half showing.

Valencia, on the other hand, have been riddled with inconsistencies this season, having once again drawn a barrage of games so far. Los Che are 8th on the La Liga table at present, with Champions League qualification still not out of question. Albert Celades’ men, though, come into this match on the back of a 1-1 stalemate against Levante.

The reverse fixture, played at the Mestalla back in December last year, ended in a 1-1 draw, with Karim Benzema scoring a late leveller to earn Real Madrid a point. Ahead of the latest meeting between the two sides, The Hard Tackle takes a closer look at the encounter.

Zinedine Zidane does not have any fresh injury concerns hampering his preparations ahead of the visit of Valencia. On Thursday, the Real Madrid manager will continue to be without four first-team players, with Nacho, Lucas Vazquez, Mariano Diaz and Luka Jovic all sidelined.

None of the absentees provide a cause for concern, though, with Zidane expected to name his strongest side against Valencia. Thibaut Courtois will keep his place between the sticks, with the back-line protecting him only likely to see one change.

Raphael Varane and Sergio Ramos will pair up at the heart of the Real Madrid defence once again, while Dani Carvajal will start as the right-back. On the left flank, Ferland Mendy could come in for Marcelo, who seemed to be cramping up towards the end of the game against Eibar.

In midfield, Toni Kroos and Casemiro are certain starters for Real Madrid. Luka Modric was in fine form against Eibar, but his rotation with Federico Valverde should continue, meaning the veteran Croat drops to the bench.

The three-man forward line should also see a solitary change, with Rodrygo Goes making way for compatriot Vinicius Jr. Eden Hazard, who played one of his best games in a Real Madrid shirt, and Karim Benzema will once again hold the key for the hosts, with their chemistry improving with each passing game.

Albert Celades has quite a few fitness troubles to contend with before he takes his side to the Spanish capital to take on Real Madrid. On Thursday, the Valencia boss will be bereft of the services of three first-team players, with Ezequiel Garay, Cristiano Piccini and Gabriel Paulista all unavailable.

Fortunately for Celades, he has plenty of defenders at his disposal to cover for the absence of those who are sidelined. In place of Garay and Gabriel, Mouctar Diakhaby and Hugo Guillamon will be Valencia’s central defensive partnership, with Daniel Wass and Jose Gaya expected to be the full-back pairing. The defence will provide cover to Jasper Cillessen.

Up ahead in midfield, Celades has greeted some good news, with Geoffrey Kondogbia available after serving his suspension this past weekend. Kondogbia should return to the starting lineup straightaway and will pair up with captain Dani Parejo in the middle of the park.

The duo will be flanked by Carlos Soler and Ferran Torres on either side, with Rodrigo Moreno and Kevin Gameiro expected to form the strike partnership for the visitors. 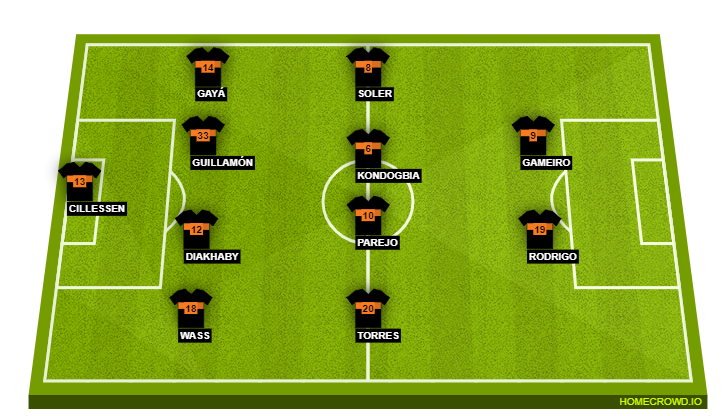 Will Ramos lead from the front again? (Photo by Angel Martinez/Getty Images)

Eden Hazard will once again have the spotlight on him after impressing on his return to the side last weekend. However, defence will hold the key for Real Madrid if they are to get past Valencia on Thursday. To that end, the performance of Sergio Ramos will be vital.

Often chastised for a poor output at the back, Ramos was in his elements against Eibar, even scoring a goal in the game. If he can remain as proactive as he was in the previous game, then Valencia will be in for a long night, while Real Madrid could be on course to grab all three points.

This is by far the trickiest fixture that Real Madrid are going to play from now till the end of the season. And so, it is imperative that Zinedine Zidane’s men take home all three points and remain in close proximity to Barcelona. Valencia, though, will not make it easy for the hosts.

Having said that, with their two first-choice centre-backs missing, Valencia could be vulnerable at the back. If Karim Benzema and Eden Hazard can continue performing like they did on the weekend, then Real Madrid should ease to a win. All things considered, Real Madrid should be on the right side of the result, which is why we are going with a 2-0 win for the hosts.