A place in the Coppa Italia final will be on the line when Juventus take on AC Milan at the Allianz Stadium on Friday night.

Football has slowly been making its way back to various countries and Italy are the latest country to return to the field. The action begins with the postponed Coppa Italia semi-finals, with the marquee fixture seeing Juventus play hosts to AC Milan at the Allianz Stadium on Friday night.

Juventus have been inconsistent under Maurizio Sarri, having been embroiled in one of the closest Serie A title races in years. The Bianconeri are also in an uncomfortable position in the Champions League, where they lost the Round of 16 first leg against Lyon. In the TIM Cup, however, they have looked decent, beating Udinese and AS Roma rather comfortably en route to the semi-finals.

For AC Milan, on the other hand, it has been yet another turbulent season, wherein they have gone through another sub-par Serie A campaign. The Rossoneri are currently seventh in the standings, having made slow progress under Stefano Pioli. As far as the Coppa Italia is concerned, Milan have fared well, beating SPAL and Torino in their first two rounds before meeting Juventus.

The first leg of the semi-finals, played at San Siro back in February, ended in a 1-1 draw, with Cristiano Ronaldo scoring a late penalty to ensure Juvenuts and AC Milan shared the spoils. Ahead of the latest meeting between the two sides, The Hard Tackle takes a closer look at the Coppa Italia encounter.

Gonzalo Higuain is the only Juventus player on the sidelines. (Photo by Marco Bertorello/AFP via Getty Images)

Maurizio Sarri does not have many injury concerns hampering his preparations ahead of the visit of AC Milan. On Friday, the Juventus manager will be bereft of the services of just Gonzalo Higuain, who is recovering from a muscle injury.

Apart from Higuain, Sarri has a fully-fit squad at his disposal, with Merih Demiral training with his teammates after recovering from a long-term knee injury. Demiral, though, is unlikely to start, with the Juventus boss expected to slowly ease him back into the thick of action.

With Demiral not starting, Matthijs de Ligt and former AC Milan star Leonardo Bonucci will pair up at the heart of the Juventus defence. The duo ought to be flanked by Alex Sandro and Juan Cuadrado, with Gianluigi Buffon getting the nod in goal.

Sarri is expected to line his side up in a 4-3-3 formation, with the three midfielders likely to be Rodrigo Bentancur, Aaron Ramsey and Blaise Matuidi. Bentancur will be the deepest of the three midfielders in the absence of Miralem Pjanic, with Matuidi being the workhorse in the middle of the park, while Ramsey will look to take up advanced positions on the pitch.

Upfront, Cristiano Ronaldo is an automatic pick for Juventus, with Paulo Dybala expected to lead the line against AC Milan, owing to the absence of Higuain. Dybala will reprise the false nine role, allowing Ronaldo the time and space to drift into the box. Douglas Costa will be the third man in the front trio, with the Brazilian tasked with using his pace to good effect in the final third. 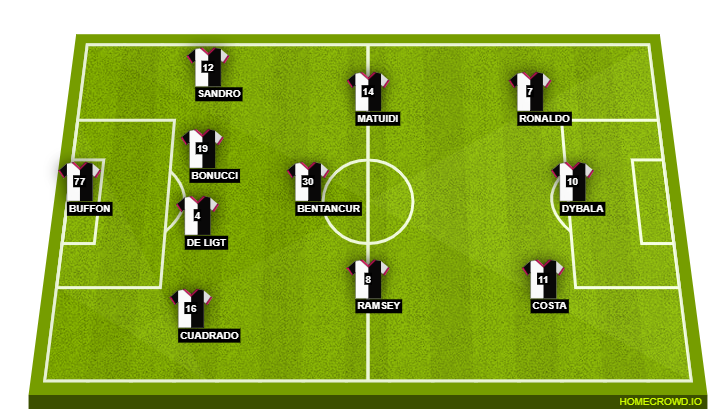 Unlike his counterpart in the Juventus dugout, Stefano Pioli has a barrage of roster issues on his hands with ahead of his side’s long-awaited return to the field. On Friday, the AC Milan boss will be without as many as four first-team players due to suspension and injuries.

The most notable of absentees for AC Milan will be Swedish striker Zlatan Ibrahimovic. The former Juventus man would have missed the game due to an injury anyway, but he is suspended as well. Also missing out due to suspension are Samu Castillejo and Theo Hernandez, who was sent off in the first leg. Leo Duarte, meanwhile, is unavailable due to fitness issues.

Zlatan Ibrahimovic misses out for AC Milan due to suspension. (Photo by Alberto Pizzoli/AFP via Getty Images)

In the absence of Ibrahimovic and Castillejo, Pioli is expected to line his side up in a 4-3-2-1 formation, looking to keep his forwards more compact and creating overloads in half spaces. Ante Rebic, who scored against Juventus in the first leg, will lead the line, with Rafael Leao being his backup option.

Rebic will be supported by Lucas Paqueta and Hakan Calhanoglu from the attacking midfield slots, who will both look to pierce the Juventus back-line. Overloading the midfield will also be the key for Milan, who will have Ismael Bennacer, linked with Real Madrid and AC Milan lately, sitting at the base of the three-man unit, playing the Anchor Man role.

Bennacer will have defensive support from Franck Kessie and Giacomo Bonaventura, both of whom will look to also transition quickly when Milan get the ball back. In defence, the key decision will be picking Hernandez’s replacement.

Davide Calabria should get the nod as the left-back, with Andrea Conti starting on the right flank. At the heart of the AC Milan defence, Simon Kjaer will be captain Alessio Romagnoli’s partner. The defence will provide cover to Gianluigi Donnarumma, with Asmir Begovic being his deputy. 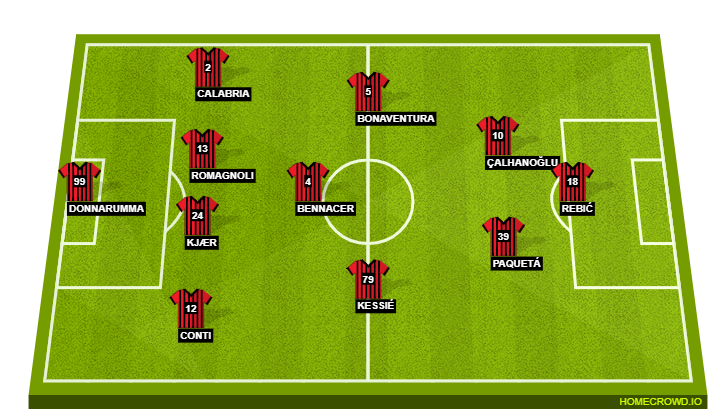 Can Dybala be the difference for Juventus against AC Milan? (Photo by Emilio Andreoli/Getty Images)

Cristiano Ronaldo would be the obvious pick for this section of our preview. However, Paulo Dybala presents an interesting alternative. The Argentine has been in and out of the side all season long, with reports earlier in the season suggesting that Maurizio Sarri did not really fancy him all that much.

Dybala, though, has slowly worked his way into the manager’s plans, becoming a key player for Juventus once again. The 26-year-old has made it a habit to score some important goals this term and another big performance against AC Milan would be a step in the right direction for Dybala.

Making the predictions for such games is always a tricky predicament. While there is no denying the class of the Juventus squad, it is also important to note that players from either side have played no football in nearly three months. In such a scenario a shock result is not all too surprising.

Having said that, the big hurdle for AC Milan is their mental block at the Allianz Stadium, which is quite a determining factor, when it comes to predicting Friday’s result. And while Maurizio Sarri might have hyped up AC Milan in the build-up to the game, the visitors are not expected to win.

The Hard Tackle is going for an exciting match-up, with the final prediction being a 2-1 win for Juventus, with the absence of Zlatan Ibrahimovic and Theo Hernandez creating too big a gulf for Milan to overcome.