David Wagner’s position as FC Schalke head coach will be under the microscope when the Royal Blues host Werder Bremen on Saturday.

Schalke are having a miserable year so far. They are currently on a ten-game winless run, making them one of the worst-performing teams in the Bundesliga, in this calendar year. The Royal Blues have also lost all three of their games since the league’s restart including a nasty 4-0 defeat to arch-rivals Borussia Dortmund in the Revierderby.

Schalke’s most recent debacle came against Fortuna Dusseldorf in midweek, when they lost 2-1. The loss extended their winless streak and failing to secure a victory this weekend could potentially allow in-form Hertha Berlin to push them out of the top end of the league table.

That being said, Werder Bremen are an ideal opposition if Schalke are to rediscover their form. Much like the Ruhrpott giants, the club from the north has been in miserable form, securing only one win in their last eight league matches.

The Green and Whites are only ahead of SC Paderborn in the league table. However, a defeat this weekend could momentarily allow the minnows to overtake them, although Bremen are yet to play one more game. And here, at The Hard Tackle, we will run the rule over these two sides ahead of this key encounter at Veltins-Arena on Saturday.

David Wagner was boosted by the return of Ozan Kabak and the Turkish centre-back is more than likely to retain his place at the heart of the Schalke defence, ahead of Jean-Clair Todibo, who is still not fully fit. He is expected to partner Salif Sane and Matija Nastastic, forming the three-man defensive backline.

The ex-Huddersfield boss could continue to put his faith in Alessandro Schopf in central midfield following the injury of Suat Serdar, who has been ruled out for the rest of the season. Omar Mascarell is likely to return to full fitness but could start on the bench.

That means Schopf will form the midfield double pivot alongside Weston McKennie, with Bastian Oczipka and Jonjoe Kenny operating as wing-backs. It will be interesting to see how they deal with Werder Bremen’s hard-working wide players this weekend.

Moving forward, Amine Harit has been ruled out due to injury, which should serve as a massive blow for the home side. Daniel Caligiuri will continue to deputise for him on the right wing, with Rabbi Matondo featuring on the opposite flank.

Finally, the Schalke attack will be spearheaded by Guido Burgstaller. The forward has endured a pretty unproductive season so far and with Michael Gregoritsch and Ahmed Kutucu pushing for a start, he must perform this weekend.

Much like Schalke, Werder Bremen also have a host of key players out injured, including defender Omer Toprak while Milos Veljkovic is suspended. Nevertheless, coach Florian Kohfeldt is likely to revert to a three-man backline in order to mirror Schalke’s 3-4-3.

That should see Kevin Vogt return to the side, forming the defensive backline alongside Niklas Moisander and Christian Gross. In the wing-back department, however, Ludwig Augustinsson is a doubt, meaning Marco Friedl could once again get the opportunity on the left flank, with Theodor Gebre Selassie starting on the other side.

Maximilian Eggestein and Davy Klaassen are guaranteed starters in central midfield. Their dynamic pressing could be key in denying Schalke the opportunity to build up from the back and dominate the game in the middle third of the pitch.

Bittencourt and Klaasen two will also look to provide additional support to wide attackers like Milot Rashica and Leonardo Bittencourt, who is likely to replace Yuya Osako.

Bremen will be needing a more physical presence against the Schalke backline meaning Davie Selke could get the nod ahead of Josh Sargent in the number nine slot. 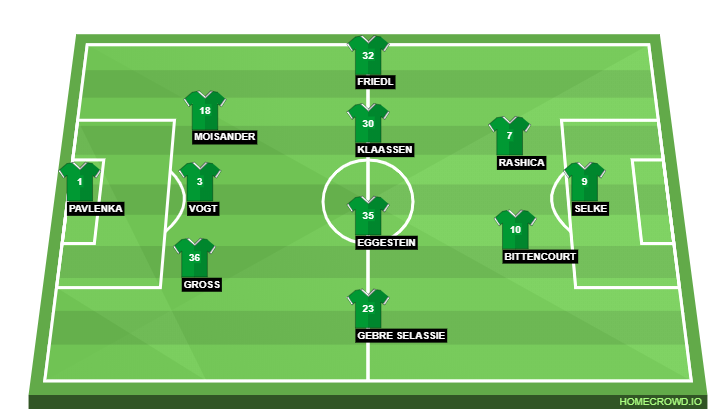 All eyes will be on Milot Rashica, as far as Werder Bremen are concerned. (Photo by Dean Mouhtaropoulos/Bongarts/Getty Images)

With Amine Harit out injured and Michael Gregoritsch unlikely to start, Bremen will have an advantage over their opposition going forward. And that is particularly due to the presence of Rachica on the flanks.

The Kosovan forward has made quite an impact in the Bundesliga this season, having been involved in 11 goals in 20 games. His pace and trickery on the flanks mean he could be a scourge for the Schalke defenders on the counter. In addition, he has also developed an excellent understanding with the Bremen attackers.

And given the way the Royal Blue backline have fared in recent weeks, it is fairly reasonable to think that Rashica could turn out to be the difference-maker in this fixture.

Bremen are a side known for their attacking prowess while Schalke have remained steady barring their recent poor run of form, which means this could turn out to be an evenly balanced encounter, with both sides struggling to find any openings. Hence, we expect a goalless draw at Veltins-Arena this weekend.