Bayern Munich will be hoping to edge closer to winning the Bundesliga title when they welcome Fortuna Dusseldorf to the Allianz Arena on Saturday.

Matchday 29 of the 2019-20 Bundesliga season continues on Saturday, with five matches on show. Reigning champions Bayern Munich will bring the curtains down on the day’s proceedings, as they play hosts to Fortuna Dusseldorf at the Allianz Arena.

There has been very little stopping Bayern Munich under Hansi Flick, who has seen his side win all but one game in 2020 so far (W11 D1). Since the resumption of the Bundesliga, Die Roten have won three games in a row, including the crucial Der Klassiker this week, with their 1-0 win helping them open up a seven-point lead atop the table, taking them a step closer to defending their title.

Fortuna Dusseldorf, on the other hand, have endured a difficult Bundesliga campaign so far, with the infamous second season syndrome visibly having its effect once again. The Flingeraner are embroiled in the relegation battle and are currently in the playoff spot. 17th placed Werder Bremen, though, are a relatively safe five points behind while 1. FSV Mainz 05 are only a point ahead.

The reverse fixture, played at the Merkur Spiel-Arena back in November last year, ended in a 4-0 win for Bayern Munich, with Joshua Kimmich, Corentin Tolisso, Serge Gnabry and Philippe Coutinho on target for the champions. Ahead of the latest meeting between the two sides, The Hard Tackle takes a closer look at the encounter.

Hansi Flick does not have any fresh injury concerns hampering his preparations ahead of the visit of Fortuna Dusseldorf. On Saturday, the Bayern Munich manager will continue to be without four first-team players.

The likes of Thiago Alcantara (groin), Corentin Tolisso (ankle) and Philippe Coutinho (ankle) are all still recovering from their respective injuries. Meanwhile, Niklas Sule continues to build up his match fitness after recovering from his long-term injury, and the visit of Fortuna Dusseldorf has come too soon for him.

There are no such concerns for Jerome Boateng, who hobbled off late against Borussia Dortmund. The German defender is fit and available and ought to start at the heart of the Bayern Munich defence, with David Alaba once again being his partner.

Alphonso Davies has been used the most by Flick in his managerial reign at Bayern Munich, and the ever-impressive Canadian will be the hosts’ left-back. On the opposite flank, there is no looking past Benjamin Pavard, who, like Davies, will pose a lot of threat down the right flank. The backline will once again provide cover to captain Manuel Neuer.

As for midfield, Leon Goretzka has been sensational in the absence of Thiago, and the German international should stay put in the double pivot. His partner, Joshua Kimmich, is perhaps, the most important player for Bayern Munich after Robert Lewandowski, with the 25-year-old an expert at dictating the tempo of the play now.

Thomas Muller has been an ever present for Bayern Munich since the resumption of football. There could be the urge to rest the veteran midfielder. However, with both Thiago and Coutinho out, it is likely that Muller will start once again, ideally till the result of the game looks beyond any doubt.

Muller is expected to be flanked by Serge Gnabry and Ivan Perisic, who ought to come in for Kingsley Coman, whose fitness track record is rather suspect. Finally, Lewandowski is the obvious choice to lead the line for Bayern Munich against Fortuna Dusseldorf. 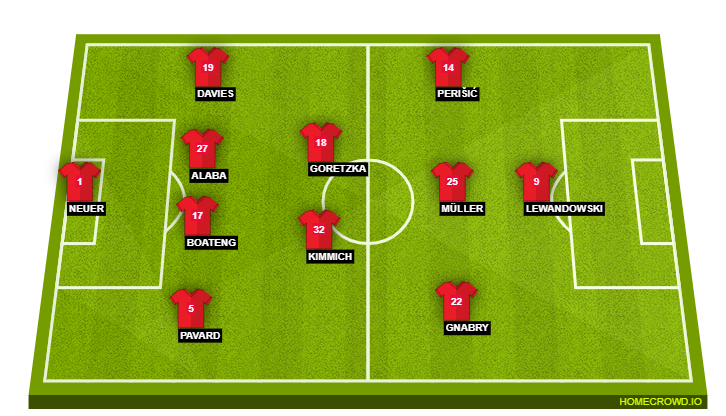 Uwe Rosler does not have any major fitness issues to contend with ahead of the trip to the Allianz Arena. Against Bayern Munich, the Fortuna Dusseldorf manager will be without just one first-team player, with Zack Steffen sidelined with a knee injury.

In Steffen’s continued absence, Florian Kastenmeier will continue deputising between the sticks for the visitors. Kastenmeier is likely to be a busy man, with a purposeful Robert Lewandowski, among other Bayern Munich attackers to face up to on Saturday.

In front of Kastenmeier, Rosler ought to line his side up in a 3-5-2 formation despite the success of the 4-3-3 against Schalke last time out. The purpose of reverting to a three-man backline will be to get men in behind the ball, hoping to keep things tight while looking to catch Bayern Munich off guard on counters.

Kaan Ayhan, Andre Hoffmann and Markus Suttner will partner up in the back three, with the trio aiming to keep a check on Lewandowski while also containing the two Bayern wingers. Matthias Zimmermann and Erik Thommy ought to be the two wing-backs, who will primarily hang back, but will also provide width in the final third.

Adam Bodzek will play the Anchor Man role, looking to provide cover to the backline while also hoping to curb the output of Thomas Muller. Bodzek will be accompanied by Valon Berisha and Kevin Stoger. Berisha will be the workhorse in the middle of the park.

Stoger, on the other hand, will take up more advanced positions, with the aim of setting up the two front men. The strike partnership for Dusseldorf will comprise of Kenan Karaman and Rouwen Hennings, who will also don the armband against Bayern. 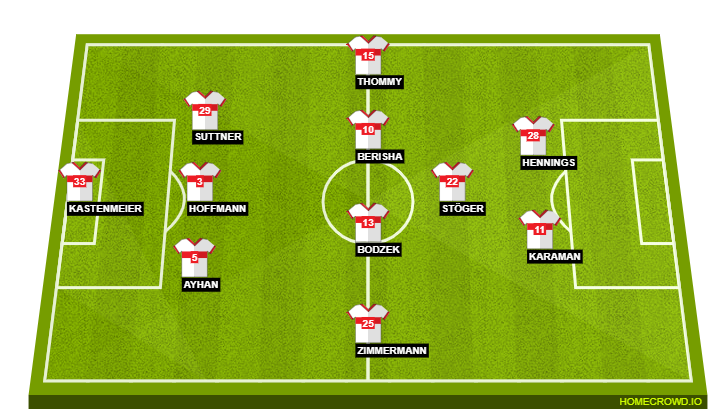 Lewandowski looks well placed to win the Torjagerkanone for the fifth time – and third time in a row – although Timo Werner would like to stop the Polish striker. Against Borussia Dortmund, Lewandowski failed to score a goal for the first time since the resumption of the Bundesliga season.

The added sub-plot of Fortuna Dusseldorf being the only current Bundesliga club he hasn’t scored a goal against only makes things more interesting. Lewandowski will surely be eager to complete the set on Saturday, as he sets out to break Gerd Muller’s all-time scoring record for a season. A big haul this weekend would surely help his cause.

The game pits two sides that are unbeaten since Bundesliga returned to action earlier this month. Fortuna Duessldorf have somehow managed to not lose, despite tricky fixtures against 1. FC Koln and FC Schalke 04. Bayern, on the other hand, have been relentless in their charge towards the title.

Dusseldorf’s unbeaten run, though, should come to a halt this weekend, with Bayern Munich likely to win once again. Home wins have been a rarity since the return of Bundesliga (only three in three matchdays), but Bayern should have no trouble improving that record. The Hard Tackle predicts a comfortable 3-0 win for the champions, with Robert Lewandowski returning to scoring ways.