Bayer Leverkusen will be desperate to return to winning ways when they take on SC Freiburg at the Schwarzwald-Stadion on Friday night.

The action continues at an electric pace in the Bundesliga, as Matchday 29 begins just a couple of days after the culmination of the 27th round of fixtures. Bayer Leverkusen will be in action first up this weekend, as they go head-to-head with SC Freiburg at the Schwarzwald-Stadion, looking to get back into the top four.

SC Freiburg have not quite been at their best since Bundesliga action resumed earlier this month. Christian Streich’s men have managed to rake in just two points in three games during this period, although a 1-1 draw with RB Leipzig was a creditable performance. The points dropped to Eintracht Frankfurt and Werder Bremen, though, have dented their European qualification hopes.

Bayer Leverkusen, on the other hand, have been one of the best teams on show in the Bundesliga in 2020. Die Werkself restarted their league campaign on a strong note as well, with 2 successive wins sending them into the top four. But, a shock 4-1 loss at home against VfL Wolfsburg this week has dropped Peter Bosz’s men back to fifth on the table.

The reverse fixture, played in November last year, ended in a 1-1 draw, with Moussa Diaby earning Bayer Leverkusen a 1-1 draw after an early goal by Lucas Holer. Ahead of the latest meeting between the two sides, The Hard Tackle takes a closer look at the encounter.

Christian Streich does not have any fresh injury concerns to deal with ahead of the visit of Bayer Leverkusen. (Photo by Ronny Hartmann/Bongarts/Getty Images)

Christian Streich does not have any fresh injury concerns hampering his preparations ahead of the visit of Bayer Leverkusen. On Friday, the SC Freiburg manager will be without three first-team players, and is also likely to monitor the fitness of a couple of others.

The likes of Lukas Kubler (knee), Janik Haberer (ankle) and Yoric Ravet (muscle injury) remain on the sidelines due to their respective injuries. Meanwhile, Streich should keep a close eye on the fitness levels of Christian Gunter and Luca Waldschmidt, neither of whom is fully fit.

After a couple of uninspiring results, the Freiburg boss should revert to the 3-4-3 formation, especially with Waldschmidt unlikely to be able to start two games in the same week. In goal, there is no replacing Alexander Schwolow, who ought to have a busy night between the sticks.

As for the back-three, Manuel Gulde should have Dominique Heintz and Philipp Lienhart for company, with the trio providing cover to Schwolow. As for the wing-backs, Gunter should start on the left. If he is not full fit, however, he could be replaced by Luca Itter, with Jonathan Schmid starting on the right side.

With Waldschmidt dropping to the bench, Nils Petersen will lead the line for Freiburg against Bayer Leverkusen, with Vincenzo Grifo and Lucas Holer, who scored in the reverse fixture against Leverkusen, completing the forward line. 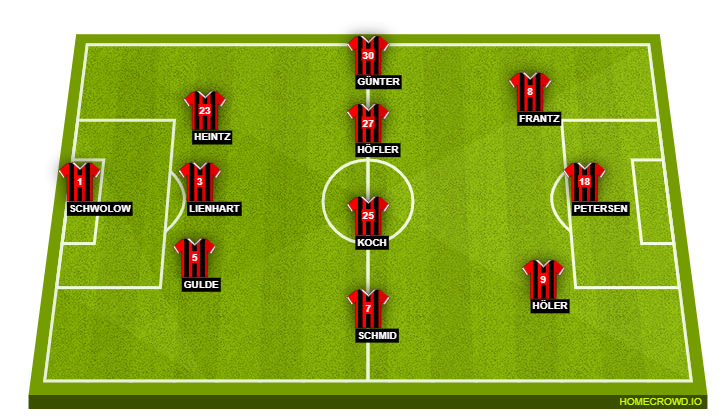 Peter Bosz is sweating over the fitness of Sven Bender, after he hobbled off during the 4-1 defeat to VfL Wolfsburg earlier this week. Apart from the German centre-back, Kevin Volland (ankle) and brother Lars Bender (foot) are also missing for Bayer Leverkusen, although Volland has returned to training ahead of the trip to Freiburg.

However, the game is likely to have come too soon for Volland, who should be available when Bayer Leverkusen take the field next week. Meanwhile, Bosz, like his Freiburg counterpart, should also shuffle his formation, reverting to the 3-4-3. The Bayer Leverkusen boss is expected to rotate his troops as well, hinting towards the same during his pre-match press conference.

Jonathan Tah was on the bench last time out against Wolfsburg, and with Sven Bender being touch and go to be available, he should return to the lineup along with Aleksandar Dragovic. Edmond Tapsoba, though, should retain his place in defence, with the backline providing cover to Lukas Hradecky again.

In midfield, Julian Baumgartlinger should return, with Kerem Demirbay being given a breather ahead of next week’s game against Bayern Munich. Baumgartlinger will line up alongside Charles Aranguiz in the middle of the park, with Nadiem Amiri starting as the right wing-back. On the left wing, Wendell could be given a chance to impress.

Upfront, Kai Havertz should be the leading man once again, reprising the false nine role. Havertz, though, could have two new men flanking him with Paulinho and Leon Bailey returning to the side. Karim Bellarabi and Moussa Diaby will be the impact players on the bench for Leverkusen. 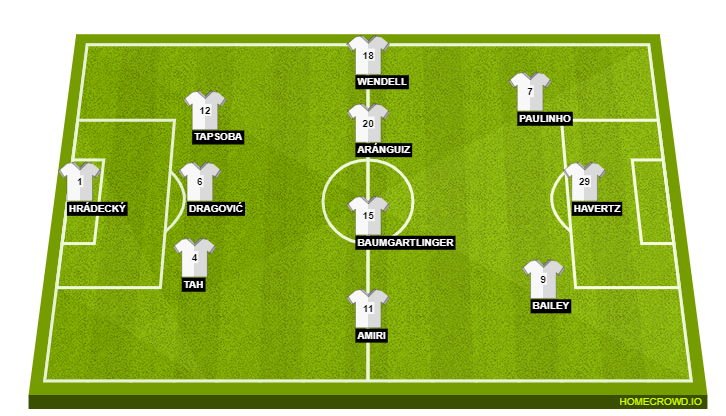 Who else but the prodigious German once again? Havertz has been in the form of his life since the turn of the year. However, against VfL Wolfsburg, he was not at his imperious best, showing the poor touch that plagued him in the first half of the Bundesliga season.

The drop in level can also be attributed to the fixture pile-up, with a lot of his Bayer Leverkusen teammates looking a bit winded over the course of the game. Havertz, though, could be buoyed by his record against Freiburg, and will be aching to break his duck on Friday. Can the 20-year-old get back to scoring ways?

The midweek defeat to Wolfsburg would have been a bitter pill to swallow for Bayer Leverkusen, especially at a time when second spot on the Bundesliga table was set to be up for grabs. Now, Peter Bosz & co. must set their focus primarily on securing a top four spot. That each of the three sides ahead of them also dropped points is a lucky bonus for them.

Freiburg, on the other hand, have not looked in the best of touches since returning to action. But, their spirited performances against RB Leipzig will spur them on to do a repeat – or perhaps go one step ahead – against Bayer Leverkusen.

Expect a keenly contested affair at the Schwarzwald-Stadion on Friday. However, Kai Havertz will be back at his topmost level, inspiring Leverkusen to a 2-1 win over Freiburg, a result that would temporarily send them up to third on the table.