Borussia Monchengladbach will be eager to return to winning ways when they take on Werder Bremen at the Weser Stadium on Tuesday.

The games continue to come thick and fast in the Bundesliga, with Matchday 28 set to begin just a couple of days after the curtains fell on the previous round of fixtures. Four of the top five teams will be in action on Tuesday, with Borussia Monchengladbach facing Werder Bremen at the Weser Stadium.

Werder Bremen have endured a season from hell, raking in just 21 points from their 26 games so far, a record that has left them 17th on the table and in the relegation zone. But, the River Islanders do have the luxury of having a game in hand and come into this game after grabbing three crucial points last weekend, beating SC Freiburg 1-0.

Borussia Monchengladbach, on the other hand, have enjoyed a superb campaign so far, their first under the tutelage of Marco Rose. Gladbach even led the Bundesliga title race at one point of the season, but have slowly dropped out of contention. Heading into Matchday 28, the Foals suffered a setback to their top four hopes, losing 3-1 to rivals Bayer Leverkusen.

The reverse fixture, played at Borussia Park back in November last year, saw Gladbach beat Bremen 3-1, with Ramy Bensebaini and Patrick Herrmann scoring for the Foals and Leonardo Bittencourt grabbing a late consolation goal. Ahead of the latest meeting between the two sides, The Hard Tackle takes a closer look a the encounter.

All eyes will be on Milot Rashica, as far as Werder Bremen are concerned. (Photo by Dean Mouhtaropoulos/Bongarts/Getty Images)

Florian Kohfeldt has been handed an injury boost ahead of the visit of Borussia Monchengladbach. On Tuesday, the Werder Bremen boss is certain to be without just four first-team players due to fitness concerns, while Philipp Bargfrede is suspended after being sent off against SC Freiburg.

The players who are definitely not facing Gladbach are Omer Toprak (calf), Kevin Mohwald (knee), Claudio Pizarro (thigh) and Niclas Fullkrug (ACL). Marco Friedl is fit and available after picking up a knock at Freiburg, but Kohfeldt is sweating over the fitness of Kevin Vogt, who might still be up for selection against Gladbach.

The good news, though, is that Ludwig Augustinsson is at the Werder Bremen manager’s disposal after overcoming muscular problems. The Swedish defender ought to slot straight back into the starting lineup, replacing Friedl in the left-back slot, while Theodor Gebre Selassie will start on the opposite flank.

At the heart of the Werder Bremen defence, Milos Veljkovic and captain Niklas Moisander are guaranteed starters, with Jiri Pavelnka being the man guarding the goal. Up ahead in midfield, Davy Klaasen will be the key man, pulling the strings and looking the find a way behind the Gladbach backline.

Klaasen will be one of the two Werder Bremen box-to-box midfielders, with Maximilian Eggestein being his partner in crime. Eggestein, though, will be more of a workhorse, supporting the defensive midfielder, who should be Vogt if he is declared fit. If not, then Nuri Sahin could reprise the Anchor Man role.

Upfront, the key men for Werder Bremen will be Milot Rashica and Leonardo Bittencourt. Rashica has attracted a lot of interest after a fantastic season and will provide the chief goal threat. Leading the line against Gladbach should be Josh Sargent, with Davie Selke being an option on the bench. 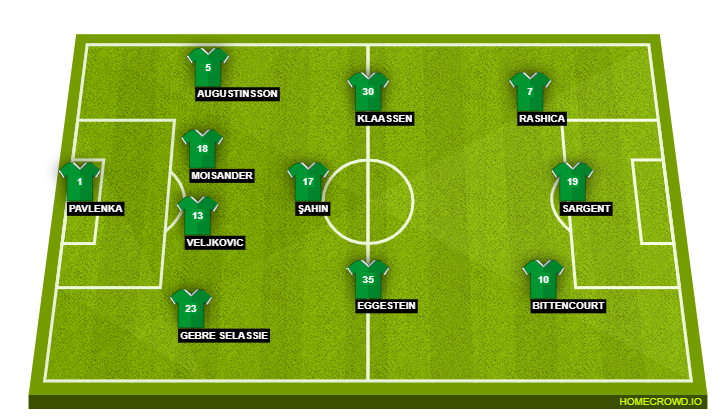 Marco Rose has a fresh injury concern hampering his preparations ahead of the trip to the Weser Stadium. Against Werder Bremen on Tuesday, the Borussia Monchengladbach manager will not have as many as four players at his disposal.

Breel Embolo is the latest player to be sidelined after the Swiss international sustained a heavy knock against Bayer Leverkusen this past weekend. Rose confirmed during his pre-match presser that Embolo will miss out on Tuesday, with Tobias Strobl (hamstring), Denis Zakaria (knee) and Fabian Johnson (muscle injury) being the other absentees.

The key decision will be deciding who replaces Embolo as the focal point of the Gladbach attack. As things stand, Alassane Plea should lead the line against Werder Bremen, with Lars Stindl coming into the side in place of Embolo.

Stindl will play off Plea, connecting midfield with attack. Apart from Plea, the key man in attack will invariably be Marcus Thuram, the scorer of Gladbach’s only goal against Leverkusen. On the right side of the Gladbach attack, Patrick Herrmann ought to replace Jonas Hofmann.

In midfield, impressive youngster Laszlo Benes will link up with Florian Neuhaus in the double pivot, with the duo screening the Gladbach defence. Neuhaus will also look to take up advanced positions on the pitch when the visitors are in possession while also carrying the ball deep into the Werder Bremen half before linking up with Thuram and Plea.

At the back, Nico Elvedi and Matthias Ginter will hope to do a better job than they did against Peter Bosz’s men last week, aiming to shut down the threat of Milot Rashica and Leonardo Bittencourt. Meanwhile, Stefan Lainer and Ramy Bensebaini will be the full-back pairing, with Yann Sommer being the man in goal. 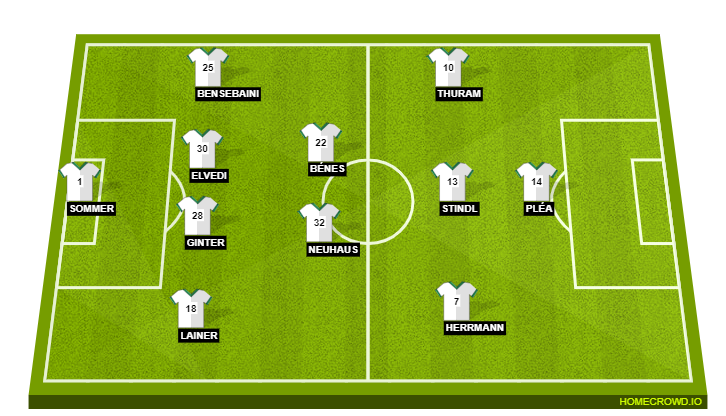 Man in form. (Photo by Ina Fassbender/AFP via Getty Images)

This is a match in which the focus will be on the exemplary attacking talent that will be in action. For Werder Bremen, much of the spotlight will be on Milot Rashica, apart from Leonardo Bittencourt. As for Borussia Monchengladbach, Alassane Plea has been the go-to man this term. His partner, Marcus Thuram is just as crucial, though.

After arriving from France last summer, Thuram has made an instant impression, looking quite deadly in the final third. Across all competitions, the young forward is Gladbach’s top scorer and was a rare bright spot in a tame loss to Bayer Leverkusen last weekend.

Continuity is now the name of the game for Thuram, and if he can retain the form he has shown since the resumption of Bundesliga, Gladbach would be in good stead.  And who knows, we might even witness his now iconic celebration.

Werder Bremen come into this game buoyed after a very important result against SC Freiburg. The River Islanders should, therefore, carry that confidence when they host Borussia Monchengladbach on Tuesday. Gladbach, though, are a side that will be hurting and eager to make an impact.

With attacking riches at his disposal, Marco Rose should see his men display the attacking verve that has made them a very popular side this season. However, their shortcomings at the back could see Werder Bremen be in the game for parts of the 90 minutes.

And so, while much of the attention will be on Der Klassiker earlier in the day, featuring Borussia Dortmund and Bayern Munich, this match has the makings of an exciting contest as well. The Hard Tackle is predicting a 3-1 win for Gladbach, with Werder Bremen giving them a run for their money for much of the game.