RB Leipzig will be eager to get back to winning ways when they take on 1. FSV Mainz 05 at the Opel Arena on Sunday afternoon.

The curtains will fall on Matchday 27 of the 2019-20 Bundesliga season on Sunday, with three matches on show. Top four contenders RB Leipzig will be in action on the day, when they lock horns with Mainz at the Opel Arena, looking to collect maximum points after a slip-up last week.

2019-20 has been a difficult season for Mainz, who have constantly mired in the relegation battle since the opening weekend. That Die Nullfunfer have lost 15 games so far this term – only rock-bottom SC Paderborn have been defeated more often – has not helped their cause one bit.

With just 2 wins from their last 10 Bundesliga games, Mainz could soon have 16th-placed Fortuna Dusseldorf, who are in the relegation playoff spot, breathing down their necks. RB Leipzig, just like their hosts, Mainz, saw their first game back after the coronavirus-enforced break ending in a draw.

Die Roten Bullen were held to a shock 1-1 draw by SC Freiburg at the Red Bull Arena, a result that saw them drop down to fourth on the Bundesliga table. That result was a big blow to Leipzig’s title hopes, with Julian Nagelsmann & co. previously enjoying a fine campaign.

The reverse fixture, played at the Red Bull Arena back in November last year, saw Leipzig handing Mainz an 8-0 thrashing, with Timo Werner achieving the rare feat of scoring a hat-trick while also recording a treble of assists. Ahead of the latest meeting between the two sides, The Hard Tackle takes a closer look at the Bundesliga encounter.

Robin Zentner is the only Mainz player out on the sidelines ahead of the tie against RB Leipzig. (Photo by Christian Kaspar-Bartke/Bongarts/Getty Images)

Achim Beierlorzer might not have had the best of times managing 1. FSV Mainz 05 so far this season. But, ahead of the visit of RB Leipzig on Sunday, the Mainz manager is set to welcome back a number of first-team stars to the matchday squad, with Robin Zentner the only player on the sidelines, due to a season-ending knee injury.

Jean-Philippe Mateta is one of the players available again after serving his suspension last week. In addition to Mateta, Mainz captain Danny Latza and Stefan Bell are also in contention to feature after recovering from their respective fitness issues.

Mateta, though, might be the only player returning to the starting lineup straightaway, leading the line for Mainz against Leipzig. Beierlorzer is, meanwhile, expected to line his side up in a 4-2-3-1 formation. Jean-Paul Boetius is expected to play off Mateta, with Karim Onisiwo and top scorer Robin Quaison being the two wide men.

In the midfield double pivot, Edmilson Fernandes should be partnered by Leandro Barreiro, with the duo primarily looking to stifle the RB Leipzig attack before transition from defence to attack. At the back, Ridle Baku will continue as a makeshift right-back, with Aaron Martin starting on the left flank.

Jeremiah St. Juste and Moussa Niakhate will partner up at the heart of the Mainz defence, while Florian Muller will be the man between the sticks. Muller ought to be a busy man in goal against an RB Leipzig attack that will look to make amends for last week’s disappointing show, led by Timo Werner. 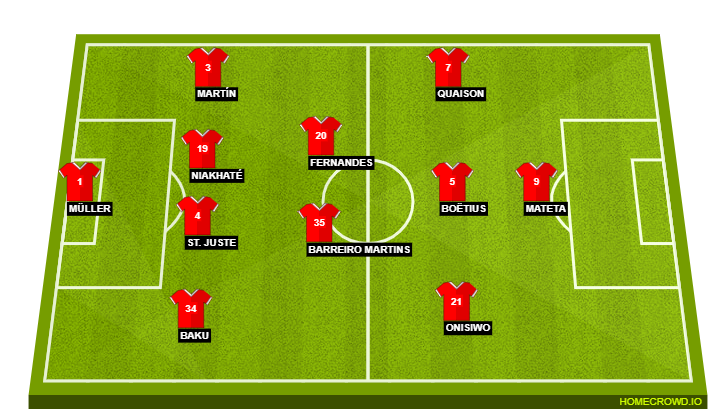 Julian Nagelsmann does not have any fresh injury concerns hampering his preparations ahead of the trip to Mainz. On Sunday, the RB Leipzig manager will only be without as many as two first-team players.

Indeed, there is more good news than bad on the team news front, with both Ibrahima Konate and Kevin Kampl fit and available after overcoming their respective injury problems. Meanwhile, Dayot Upamecano is back as well for Leipzig after serving his suspension, while Marcel Sabitzer should start against Mainz too.

Upamecano is expected to return to the starting lineup, but Konate, who has recently been linked with a move to Manchester United, is likely to be eased back into action. Upamecano is, therefore, likely to be partnered by Marcel Halstenberg and Lukas Klostermann in the back-three, with Nagelsmann expected to use the 3-5-2 formation.

The back three will provide cover to Peter Gulacsi, who will be keen to record a clean sheet after conceding a rather bizarre goal last weekend. Up ahead in midfield, Emil Forsberg is expected to miss out once again due to tonsillitis, with a return only likely next week.

The returning Sabitzer ought to replace Tyler Adams, with Christopher Nkunku moving to the right wing-back slot. Sabitzer will be the chief creative outlet for Leipzig, with Konrad Laimer and Kevin Kampl being the workhorses in the middle of the park.

Angelino is expected to retain his spot as the left wing-back, and along with Nkunku, he will be tasked with providing the width in the final third. Upfront, Timo Werner and Yussuf Poulsen will form the strike partnership for Leipzig. 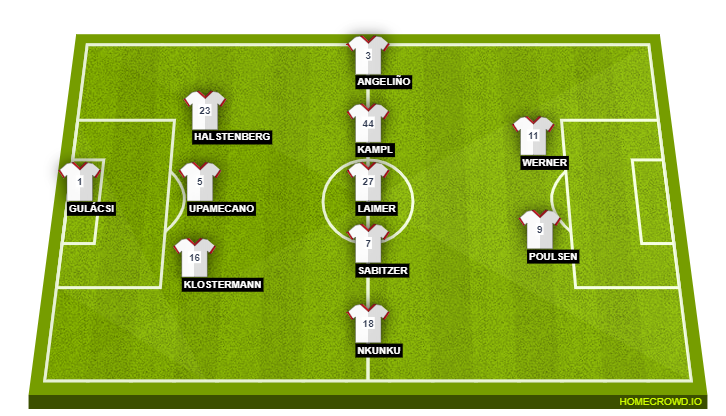 Time to break the duck. (Photo by Maja Hitij/Bongarts/Getty Images)

It is no secret that Julian Nagelsmann’s appointment as the RB Leipzig manager has transformed Timo Werner. Now a more well rounded player, Werner is excelling in various positions, having made as big an impact playing out wide as he has done when leading the line for Die Roten Bullen.

However, his quest to win the Torjagerkanone has slowed down since the turn of the year, with the 24-year-old managing to find the back of the net just once in his last eight Bundesliga outings. A target for Chelsea and Liverpool, Werner still appears to be in good touch. But, his return among the goals will be key if Leipzig are to bounce back to winning ways against Mainz.

RB Leipzig were not really in the best of touches on their return to the field last week. While they do remain largely solid at the back, they did not pose nearly as much of a threat as they can on their best days, with the absence of Marcel Sabitzer being felt dearly.

Mainz, on the other hand, looked in decent form last week, but need a win soon to ensure they get away from the relegation zone. That result, however, might not come against Leipzig, who ought to tighten up defensively upon the return of Dayot Upamecano. And, with Sabitzer back in the side, the moves should flow more seamlessly.

Expect Timo Werner to have his scoring boots on against Mainz, with Leipzig getting back to winning ways in a rather comfortable fashion. The Hard Tackle, therefore, predicts a 2-0 win for Julian Nageslamann & co. With Borussia Monchengladbach and Bayer Leverkusen going head-to-head on Saturday, a return to third spot on the Bundesliga table might be on the cards too.