Bayern Munich will aim to continue their unbeaten start to 2020 in the Bundesliga when they welcome Eintracht Frankfurt to the Allianz Arena on Saturday.

Bundesliga action resumes this weekend with Matchday 27 of the 2019-20 season and four of the top five sides are in action. Champions Bayern Munich will round off the proceedings for Saturday when they play hosts to Eintracht Frankfurt at the Allianz Arena.

Bayern Munich have been on a roll under Hansi Flick, with a 2-1 loss to Borussia Monchengladbach way back in December being the last time they faced defeat in any competition. Unbeaten in 14 Bundesliga games, the defending champions returned to action following the end of the COVID-19 enforced break on football with a 2-0 win at Union Berlin last week.

Eintracht Frankfurt, on the other hand, are in all sorts of troubles, having managed just 8 wins in 25 Bundesliga games so far this season. 5 of those wins had come in their first 10 games, meaning the Eagles have won a mere 3 of their last 15 league outings and returned to action last week with a 3-1 loss to Gladbach, their fourth defeat on the bounce. However, manager Adi Hutter still retains the board’s support, as per sporting director Bruno Hubner.

The reverse fixture, played at the Commerzbank-Arena in November last year, ended in a shock 5-1 win for Eintracht Frankfurt, in what proved to be the last game as the Bayern Munich manager for Niko Kovac. Ahead of the latest meeting between the two sides, The Hard Tackle takes a closer look at the encounter.

Javi Martinez and Thiago Alcantara could both miss out for Bayern Munich against Eintracht Frankfurt. (Photo by Jörg Schüler/Bongarts/Getty Images)

Hansi Flick does not have any fresh injury concerns to deal with ahead of the visit of Eintracht Frankfurt this weekend. On Saturday, the Bayern Munich manager will continue to be without four first-team players due to various fitness issues.

Corentin Tolisso, who could be on his way out of the club this summer, and Philippe Coutinho are both on the treatment tables due to their respective ankle injuries. Niklas Sule and Javi Martinez are both on the return trail, but might not be match fit enough to be back in the thick of things yet. The duo, though, should return to action in a week or so.

After easing back into action in a reasonably comfortable fashion, Flick is unlikely to make a lot of shuffles, if any, against Eintracht Frankfurt. Starting in goal, there should be no replacing Manuel Neuer, who has been in resurgent mood this season.

At the back, with Sule still unavailable, David Alaba will partner Jerome Boateng at the heart of the Bayern Munich defence. Alphonso Davies has played every single game since Flick replaced former Eintracht Frankfurt boss Niko Kovac as the Bundesliga champions’ manager and should start as the left-back. On the opposite flank, Benjamin Pavard is the obvious pick.

Joshua Kimmich has reinvented himself as a holding midfielder this term, and will look to screen the Bayern defence. However, Kimmich will have a different partner in the midfield double pivot, with Thiago Alcantara being unable to train for much of the week due to a minor muscular injury. In his absence, Leon Goretzka could drop down to play a deeper role against Frankfurt.

With Goretzka playing in the double pivot, Thomas Muller is likely to be deployed as a no. 10, with Flick giving him a free role. The creative onus in the Bayern lineup will indeed be on Muller, who has the most assists in the Bundesliga this season. Another player who did not train a great deal this week was Serge Gnabry, although Flick insisted that the German winger is good to go.

However, just days ahead of Der Klassiker, Flick might not take a chance with Gnabry, meaning Kingsley Coman and Ivan Perisic could start as the two wide men. Finally, Robert Lewandowski will lead the line for Bayern against Eintracht Frankfurt. Expect Flick to make some early changes, though, with Bayern set to face rivals Borussia Dortmund on Tuesday. 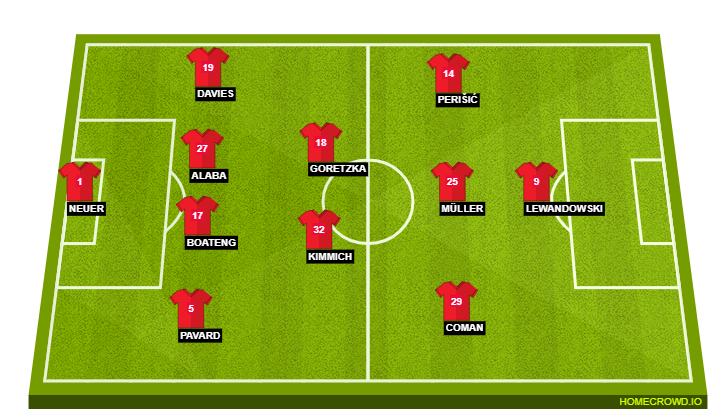 The problems are not going away easily for Adi Hutter ahead of the trip to the Allianz Arena to take on Bayern Munich. Against the Bundesliga champions on Saturday, the Eintracht Frankfurt boss will be without two first-team players.

Goncalo Paciencia, Frankfurt’s top scorer in the Bundesliga this season, is out with a thigh injury, while Dominik Kohr is suspended after picking up his fifth yellow card of the season last time out against Borussia Monchengladbach.

In Paciencia’s absence, Bas Dost will lead the line for Frankfurt against Bayern Munich, although Andre Silva is also in contention after scoring the only goal for his side last week. Hutter ought to shuffle his system slightly behind Dost, reverting to the 4-2-3-1 formation, with Daichi Kamada being deployed centrally.

Kamada’s place on the right flank will likely be taken by Timothy Chandler, with Filip Kostic being the left winger. Kostic will shoulder a lot of the responsibility in the final third, with Chandler providing the creative impetus on the opposite side.

Stefan Ilsanker will sit in front of the back four, looking to contain the impact of Leon Goretzka and Thomas Muller. Ilsanker will be supported by Sebastian Rode, who will also be in-charge of transitioning from defence to attack swiftly.

At the back, Martin Hinteregger and captain David Abraham will form the central defensive partnership, while Almamy Toure and Evan N’Dicka will be the full-back pairing. Kevin Trapp will be stationed between the sticks and ought to be a busy man against the mighty Bayern Munich. 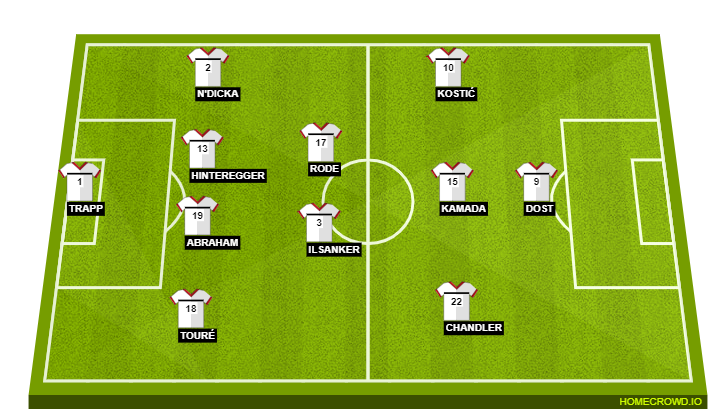 Muller has been brought to life under Hansi Flick. (Photo by Alexander Hassenstein/Bongarts/Getty Images)

Robert Lewandowski has deservedly been receiving a lot of plaudits for yet another scintillating campaign on a personal level. However, one player who has been extremely crucial for Bayern Munich this season is Thomas Muller.

In the upper echelons of assist charts in Bundesliga and Europe in the current campaign, Muller has rediscovered his best touch under the tutelage of Hansi Flick. This second wind has greatly inspired Bayern Munich to dominate the Ruckrunde.

His continued form will be key if they are to retain their Bundesliga crown, and against an Eintracht Frankfurt side that has struggled on their travels this season, Muller’s maintaining his output will make the job of defeating the visitors that bit easier.

There are no two ways about it, Bayern Munich should coast to a fairly comfortable win. Unlike the reverse fixture, the reigning champions are looking in great touch at the moment, especially after gradually finding their way to their domineering levels against Union Berlin last week.

Eintracht Frankfurt, on the other hand, are the worst travellers in the Bundesliga this season and just cannot catch a break at the moment. With a defender being their joint-top scorer in the league in the current campaign, it is clear that the Eagles might not have the best of times in the final third against Bayern.

The Hard Tackle, therefore, predicts Bayern Munich to warm up for the trip to face Borussia Dortmund on Tuesday with a 3-0 win over Frankfurt on Saturday.