Tottenham will hope to usurp the first leg deficit and reach the UEFA Champions League quarter-finals when they face RB Leipzig at the Red Bull Arena.

UEFA Champions League action resumes this week and over the next 10 days, the quarter-finalists will be confirmed. The first of these will be confirmed on Tuesday, when RB Leipzig play hosts to Tottenham Hotspur in their Round of 16 second leg tie at the Red Bull Arena.

RB Leipzig made it to the Champions League knockout stages after topping Group H. The East German side have not lost a game in over a month, but have dropped the ball in the Bundesliga title race, with four draws in their last six league games leaving them four points adrift of leaders Bayern Munich.

Tottenham, on the other hand, qualified for the Round of 16 after finishing runners-up to Bayern Munich in Group B. Spurs, though, are at their lowest ebb under the tutelage of Jose Mourinho, with no wins in their last five games. During this run, the north Londoners have been booted out of the FA Cup and are also on the verge of going out of the Champions League.

The reverse fixture, played at the Tottenham Hotspur Stadium last month, ended in a 1-0 for RB Leipzig, with Timo Werner scoring the only goal of the game. Ahead of the latest meeting between the two sides, The Hard Tackle takes a closer look at the encounter.

Julian Nagelsmann does not have any fresh injury concerns to contend with ahead of the visit of Tottenham Hotspur for the Champions League Round of 16 second leg tie. On Tuesday, the RB Leipzig boss will likely be without four first-team players in the worst case scenario.

The good news, though, is that Timo Werner is expected to be fit to start after picking up a knock in the goalless draw with Wolfsburg this past weekend. As for those who could miss out for Leipzig, Ibrahima Konate (hamstring) and Willi Orban (knee) are surely unavailable, while Ethan Ampadu (back) and Kevin Kampl (ankle) are major doubts.

The 3-4-3 formation and its variants have been the go-to setups for Nagelsmann lately and the RB Leipzig manager should line up with a similar system against Tottenham. Peter Gulacsi is the obvious choice in goal for the hosts.

In front of him, the back three should once again feature Dayot Upamecano, Marcel Halstenberg and Lukas Klostermann. Manchester City loanee Angelino has made quite an impression since making the move to Leipzig and will take his place as the left wing-back. On the opposite flank, Nordi Mukiele is a certain starter.

Konrad Laimer will be tasked with curbing the flows of the Tottenham attacks through the middle of the park and will be partnered by Marcel Sabitzer. Sabitzer, who will don the captain’s armband for RB Leipzig, will have the responsibility to pull the strings in midfield.

Werner will undoubtedly be the man in spotlight for Leipzig. The German international will play off Patrik Schick, with Christopher Nkunku completing the numbers in the final third. Nkunku’s change of pace will be the X-Factor for the hosts, with Werner charged with being clinical in front of goal. 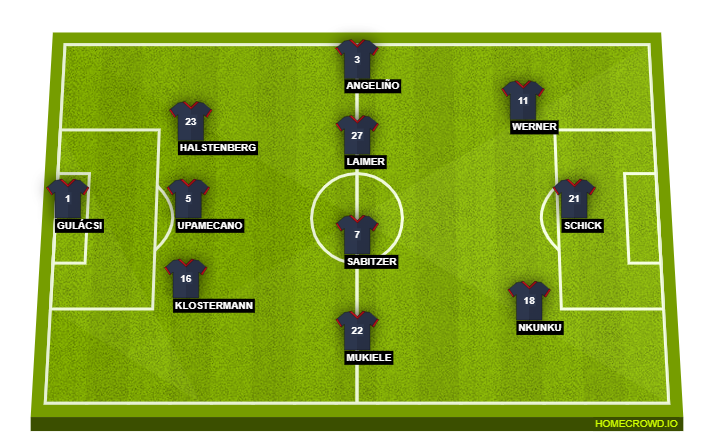 Jose Mourinho has been crippled by a spate of injuries to key players over the last couple of months and the situation has hardly improved for him ahead of the trip to take on RB Leipzig. On Tuesday, the Tottenham Hotspur manager will be without as many as six first-team players.

The latest player to be sidelined is Steven Bergwijn, who sustained an ankle injury against Burnley this past weekend. The Dutch international will be unavailable for a considerable period and has joined Son Heung-min (arm), Moussa Sissoko (knee) and Harry Kane (hamstring) in the treatment room, while Ben Davies (hamstring) and Juan Foyth (thigh) are ruled out as well.

The absence of Davies means Japhet Tanganga will be stationed in the left-back slot, with Serge Aurier starting on the opposite flank. Toby Alderweireld and Davinsion Sanchez will pair up at the heart of the defence, which will provide cover to Tottenham captain Hugo Lloris in goal.

The injuries restrict Mourinho’s options in midfield and attack, especially with Tanguy Ndombele unlikely to be picked after coming under criticism from the Tottenham manager last week. Harry Winks and Eric Dier are, therefore, certain picks in the midfield double pivot, with Giovani Lo Celso starting in the advanced midfield role.

Dele Alli led the line for Tottenham this past weekend and should do so once again when Spurs pay RB Leipzig a visit for the Champions League Round of 16 second leg. Finally, Erik Lamela and Lucas Moura pick themselves as the two wide men for Tottenham. 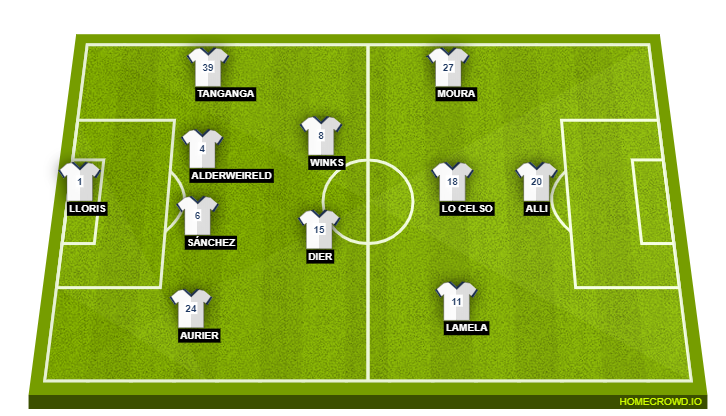 Time to break the duck. (Photo by Maja Hitij/Bongarts/Getty Images)

He has been the goalscoring extraordinaire for RB Leipzig pretty much since arriving from VfB Stuttgart, but Werner has been transformed in the current season under Julian Nagelsmann. With 21 goals in Bundesliga, only Robert Lewandowski is ahead of him in the race to win the Golden Boot.

Werner, though, has not always been at his devastating best in the Champions League, scoring just 4 goals in 7 outings so far. One of those goals, though, came against Tottenham in the first leg and it is undeniable that Werner’s output will hold the key for RB Leipzig in the second leg as well.

Breaking his duck in a Champions League game at home will be on his mind as well. After all, Werner is yet to find the back of the net in six home Champions League appearances, attempting 22 shots without success. Time to kill two birds with one stone.

Tottenham are ravaged by injuries and it is hard to see how they can consistently score goals in the absence of Harry Kane, Son Heung-min and even Steven Bergwijn. RB Leipzig, on the other hand, are one of the most defensively astute sides in the Champions League and should hold their own at the back against Tottenham.

On the opposite end, Leipzig ought to put the vulnerable Tottenham defence under a lot of pressure while Timo Werner is in line to score his first home goal in the Champions League. The Hard Tackle predicts a comfortable evening for the hosts, with Julian Nagelsmann & co. beating Tottenham 2-0 to reach the Champions League quarter-finals.