The Carabao Cup will be up for grabs when Aston Villa lock horns with holders Manchester City in the final at Wembley on Sunday.

It is that time of the year again. The first major trophy of the season in England is on the line. Aston Villa and Manchester City meet in the Carabao Cup final at Wembley on Sunday evening, with holders City looking to win the competition for a third year running.

Aston Villa have enjoyed a scintillating run to the Carabao Cup final, with some impressive results to show over the course of their campaign. The Villans have defeated Wolves, Liverpool and Leicester City in the last three rounds to seal a place in the final. Heading into the game against Manchester City, though, Dean Smith’s men have lost each of their last three games.

Manchester City, on the other hand, had beaten the likes of Preston North End, Southampton and Oxford United to reach the semi-finals before narrowly getting the better of neighbours Manchester United to reach the final. In direct contrast to Aston Villa’s form, City have won each of their last 3 games, and will be buoyed by their 2-1 Champions League success against Real Madrid this week.

Aston Villa and Manchester City have already clashed twice this season, with Pep Guardiola & co. winning each game, by an aggregate score of 9-1. Ahead of the latest meeting between the two sides, The Hard Tackle takes a closer look at the Carabao Cup final.

Dean Smith has seen his squad’s injury woes ease up considerably ahead of the Carabao Cup final. Against Manchester City on Sunday, the Aston Villa manager will be without just four first-team players, with Keinan Davis and Anwar El Ghazi in contention to return to the squad.

Those on the sidelines are Tom Heaton (knee), Jed Steer (heel), John McGinn (ankle) and Wesley (knee). Heaton and Wesley will not feature again this season while McGinn is around a week away from making his long-awaited return to help Aston Villa in their battle against relegation.

El Ghazi could be a part of the matchday squad, but is unlikely to start. Mbwana Samatta should lead the line for Aston Villa against Manchester City. Aston Villa skipper and talisman Jack Grealish will line up on the left flank, with Trezeguet deployed on the right wing in El Ghazi’s stead.

Meanwhile, after being scathing in his review of his team’s performance against Southampton last weekend, Smith should make some definitive changes, starting with the formation. The Aston Villa boss should revert to the 4-3-3, ditching the 3-4-3 formation which has oddly left the Villans exposed defensively.

Adding a body in the middle of the park, Aston Villa will look to contain Manchester City in midfield. Conor Hourihane is expected to return, partnering Douglas Luiz and Marvelous Nakamba in the three-man midfield unit. Nakamba will play the Anchor Man role, with Hourihane and former Manchester City man Luiz being the workhorses in the middle of the park.

Frederic Guillbert has not quite been at his best lately and could make way for Ahmed Elmohamady in the right-back slot, with Smith hoping to count on the experience of the Egyptian. On the left flank, Matt Targett is a certain starter.

At the heart of the Aston Villa defence Tyrone Mings should have Bjorn Engels for company, while Orjan Nyland, who has performed admirably in the Carabao Cup this season, should get the nod over Pepe Reina between the sticks. 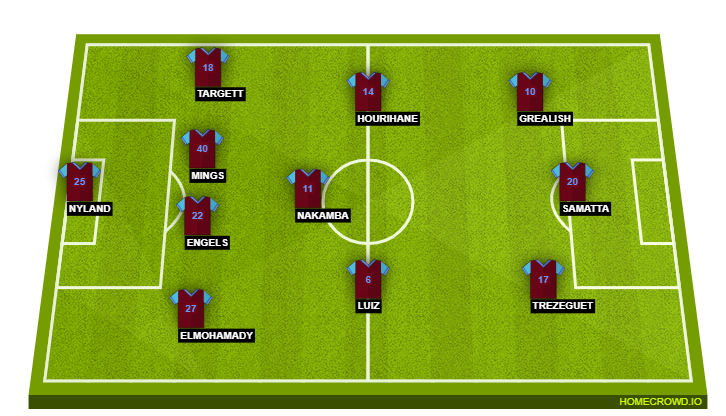 Pep Guardiola has been handed a major injury blow ahead of the game against Aston Villa. In the Carabao Cup final on Sunday, the Manchester City manager will be without two first-team players, with Aymeric Laporte the latest player to be sidelined.

Laporte picked up another knee injury in the 2-1 win over Real Madrid earlier this week and will be out of action for nearly a month. Leroy Sane is the only other player unavailable, as the German continues to regain fitness after featuring in a Premier League 2 game earlier this week. In Laporte’s stead, Fernandinho should start as one of the two centre-backs.

Fernandinho will be partnered by Nicolas Otamendi at the heart of the Manchester City defence. Guardiola has rotated between Joao Cancelo and Kyle Walker in the Carabao Cup, but Cancelo should pip Walker to the spot against Aston Villa. On the left flank, Benjamin Mendy is a certain starter. Claudio Bravo should start ahead of Ederson in goal, as has been the case in cup ties.

David Silva is likely to return to the midfield on Sunday after starting on the bench last time out. Rodri will sit at the base of the three-man midfield, looking to set a quick tempo to the game and move Manchester City forward. Kevin De Bruyne will be the third man in the middle of the park, dropping to his usual spot after starting as the False Nine against Real Madrid.

Upfront, Gabriel Jesus impressed starting on the left in the Champions League tie. On Sunday, he is likely to drop out, though, with Sergio Aguero leading the line for Manchester City against Aston Villa. Raheem Sterling will be another player returning, starting on the left wing, while on the right flank, the in-form Riyad Mahrez is an automatic pick. 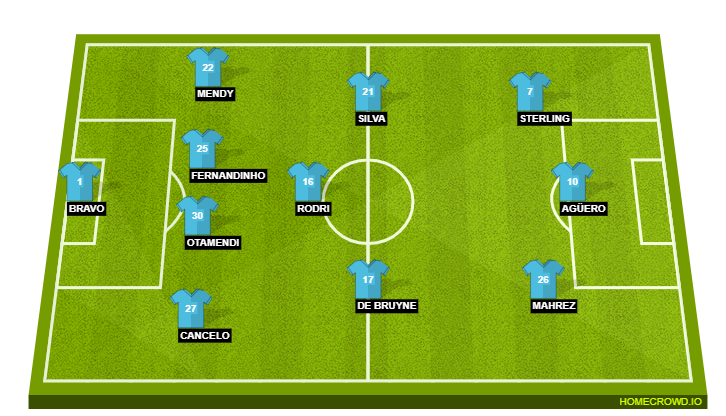 Sterling needs to step up. (Photo by Paul Ellis/AFP via Getty Images)

It has been an odd season for Sterling. After being one of the best players in the world last term, the English international has struggled to make an impact on a consistent basis in this campaign. Having been in the eye of the storm ahead of the Champions League game against Real Madrid, it is now time for Sterling to let his game do the talking for him.

The 25-year-old tends to revel in games at Wembley, having been directly involved in nine goals in his last five appearances there for club and country. With the first trophy of the season up for grabs, Sterling needs to deliver the goods and inspire Manchester City to Carabao Cup triumph, as the Citizens look to end a difficult season on a high.

Aston Villa have made a name out of being giant killers in the Carabao Cup this season. However, a purposeful Manchester City side will be another challenge altogether for Dean Smith and his spirited side. The holders are in fine touch and after beating Real Madrid at the Bernabeu, they will be in an exuberant mood.

The likes of Riyad Mahrez and Kevin De Bruyne are on a roll, while Sergio Aguero enjoys himself playing against Aston Villa. So, as things stand ahead of the Carabao Cup final, it looks like there is only one way this game will head. While shock results are a part and parcel of cup games, we predict Manchester City to complete a three-peat with a 3-0 win.