Tottenham Hotspur and RB Leipzig will be hoping to take one step closer to the UEFA Champions League quarter-finals when they lock horns on Wednesday.

The UEFA Champions League has resumed this week with the beginning of the Round of 16. The eight first leg ties are spread over two weeks, with two of these games being played on Wednesday. Tottenham will be in action on the day, as they play hosts to RB Leipzig at the Tottenham Hotspur Stadium.

Tottenham reached the Champions League Round of 16 after finishing comfortable runners up in Group B. Spurs have endured a topsy turvy season, with the arrival of Jose Mourinho not exactly galvanizing a group of players that was floundering under Mauricio Pochettino. Nevertheless, they now find themselves within touching distance of the top four in the Premier League.

RB Leipzig, on the other hand, are enjoying a solid season and find themselves in contention to win the Bundesliga title. The German outfit are in the Champions League knockout stages for the first time ever, having finished atop Group G with 11 points from their 6 games.

Tottenham and RB Leipzig will be clashing with each other for the first time on Wednesday and ahead of the latest meeting between the two sides, The Hard Tackle takes a closer look at the Champions League encounter.

Jose Mourinho has been handed a body blow ahead of his side’s return to Champions League action after Son Heung-min was ruled out of the season due to a fractured arm. Against RB Leipzig on Wednesday, the Tottenham Hotspur manager will be without four first-team players, with attack, in particular, posing a major concern.

Apart from Son, who Mourinho confessed will likely not feature again this term, Harry Kane is also a long-term absentee, due to a hamstring injury. Moussa Sissoko (knee) and Juan Foyth (groin) are the other certainties missing out for Tottenham when they take the field against Leipzig.

In the absence of Son and Kane, Mourinho is down to his bare bones in attack, especially with Erik Lamela also being doubtful to face Leipzig. Lamela will be assessed ahead of the game and if he is not passed fit, Ryan Sessegnon could start in the final third. Steven Bergwijn, Dele Alli and Lucas Moura, though, are automatic picks in attack.

Giovani Lo Celso did not start in the 3-2 win over Aston Villa this past weekend, but should return to the lineup for the Champions League Round of 16 first leg. Lo Celso ought to have the resurgent Harry Winks for company in the midfield double pivot, with the Englishman in charge of harrying the Leipzig midfielders during their build-up play.

In defence, Serge Aurier, Davinson Sanchez and Toby Alderweireld are certainties. As for the left-back slot, Ben Davies is fit now and should be preferred to Japhet Tanganga. Hugo Lloris picks himself in goal and could be in for a busy evening. 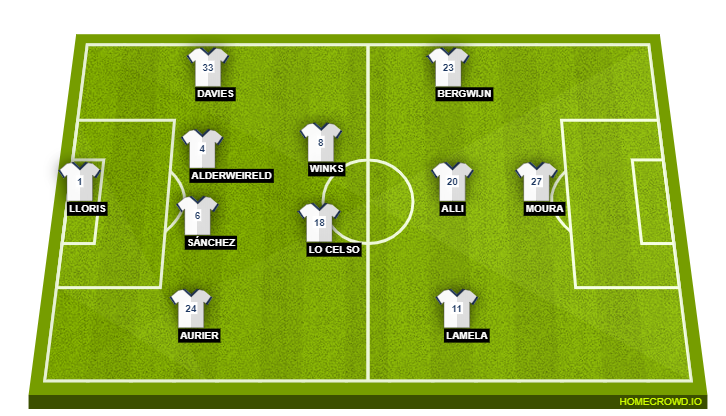 Like his counterpart in the Tottenham dugout, Julian Nagelsmann has plenty of major injury troubles hampering his preparations ahead of the Champions League Round of 16 first leg tie. On Wednesday, the RB Leipzig manager will be without four first-team players due to fitness issues while also missing Dayot Upamecano due to suspension.

The likes of Ibrahima Konate (hamstring), Willi Orban (knee), Tyler Adams (calf) and Kevin Kampl (ankle) are on the sidelines. The absence of Konate and Orban due to their respective injuries coupled with Upamecano’s suspension means Nagelsmann’s defensive options are heavily restricted.

As a result, the Leipzig manager could revert to a 4-2-2-2 formation, having preferred 3-4-1-2 of late. Marcel Halstenberg and Lukas Klostermann will play as makeshift centre-backs, with Nordi Mukiele anf Angelino being the full-back pairing. Peter Gulacsi will be the man between the sticks.

Konrad Laimer is a definite starter in the middle of the park, but in the absence of Adams and Kampl, he could have Christopher Nkunku as his partner. Upfront, Marcel Sabitzer and Emil Forsberg will shoulder the bulk of the creative responsibility, setting up the strikers, who will be Timo Werner and Patrik Schick. 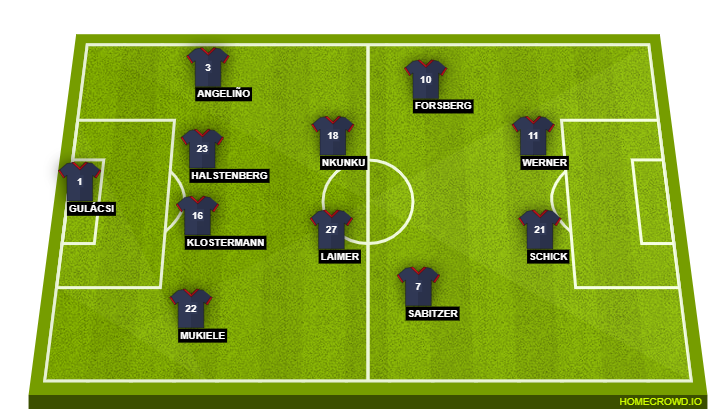 Moura will need to step up. (Photo by Julian Finney/Getty Images)

If Harry Kane’s absence due to a hamstring injury had already compounded the scoring woes for Tottenham, the fact that Son Heung-min could be done for the season means Jose Mourinho lacks the presence of genuine and consistent goalscorers in his squad.

Lucas Moura is now likely to lead the line for Tottenham for the remainder of the season, meaning he will be tasked with finding the back of the net more often than the rest of his teammates. Moura has usually shown the tendency to make a difference in the Champions League and with Mourinho in need of some inspiration, now is the perfect time for him to prove himself again.

Tottenham were already going to be up against it facing a side that has given Bayern Munich a run for their money in Bundesliga this season. Now, with Son Heung-min facing a spell on the sidelines, Spurs could be in for a tough night.

RB Leipzig will not have it easy, though, especially considering the Tottenham Hotspur Stadium has already witnessed some special European nights. Expect quite a bit of goalmouth action on both ends of the pitch.

In the end, however, a lack of options for Mourinho coupled with the visitors’ strong away record in the Champions League this season means Leipzig should have the slightest of edges, which is why The Hard Tackle predicts a 2-1 win for Julian Nagelsmann & co.