La Liga action resumes this weekend with the commencement of Matchday 24 of the 2019-20 season. The latest round of fixtures will begin with a blockbuster encounter, as Valencia play hosts to Atletico Madrid at the Mestalla on Friday night, with just two points separating the two sides.

Valencia have blown hot and cold all season, having struggled to put together a run of positive results. However, most of their poor results have come on the road. In fact, Los Che have a rather solid home record and are one of only three sides that are yet to be beaten in the comforts of their own home. Their most recent result, though, was a crushing 3-0 defeat at Getafe last week.

Atletico Madrid, on the other hand, may be ahead of Valencia on the La Liga table. However, Los Rojiblancos have also been underwhelming this season, much like their hosts on Friday. Diego Simeone & co. have a shoddy away record, having managed to win just 3 out of the 11 games that they have played on their travels.

The reverse fixture, played at the Wanda Metropolitano back in October, ended in a 1-1 draw, with Diego Costa and Dani Parejo scoring for Atletico Madrid and Valencia, respectively. Ahead of the latest meeting between the two sides, The Hard Tackle takes a closer look at the encounter.

Alessandro Florenzi (in white) is suspended after being sent off against Getafe last week. (Photo by Javier Soriano/AFP via Getty Images)

Albert Celades has greeted a mix of good and bad news ahead of the visit of Atletico Madrid. On Friday, the Valencia manager is set to be without as many as six first-team players, although he is set to welcome plenty of players back as well.

The likes of Jaume Costa, Daniel Wass, Denis Cheryshev and Kevin Gameiro are fit and available. However, Celades will not be able to call upon the likes of Jasper Cillessen, Manu Vallejo, Ferran Torres and Rodrigo Moreno due to their respective short-term injuries.

Meanwhile, Ezequiel Garay has seen his season being brought to a premature end due to a cruciate ligament rupture, while January arrival Alessandro Florenzi is suspended for the game after being sent off against Getafe last weekend.

With Wass fit and available now, though, Celades has a direct replacement for Florenzi now at his disposal. Wass will slot in on the right side of the Valencia defence, with Jose Gaya a certain starter on the opposite flank. Mouctar Diakhaby and Gabriel will form the central defensive partnership, while Jaume Domenech is an automatic pick in goal.

Up ahead in midfield, Francis Coquelin should return, partnering Valencia captain Dani Parejo in the middle of the park. With Ferran Torres unavailable, Goncalo Guedes could come into the starting lineup, with Carlos Soler completing the midfield quartet.

Rodrigo’s absence means Gameiro is set to return already. The French striker will lead the line for the hosts, with explosive forward Maximiliano Gomez being his partner in the final third. 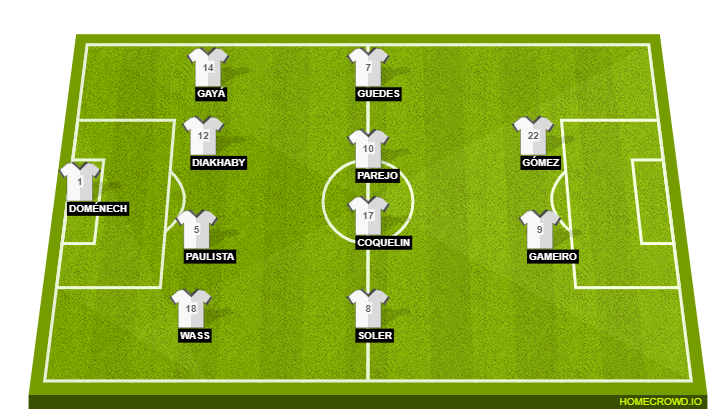 Much like his counterpart in the Valencia dugout, Diego Simeone has plenty of problems to contend with ahead of his side’s trip to Valencia. On Friday, the Atletico Madrid boss will be without five first-team players due to fitness troubles.

Diego Costa has resumed training after recovering from a hip complaint. The Spanish international, though, is still not fit enough to return to action just yet. Apart from Costa, Simeone is also bereft of the services of Dario Poveda, Kieran Tripper, Hector Herrera and Joao Felix.

Evidently, attack has been worst hit by the spate of injuries, although the return of Alvaro Morata is a huge positive. Morata should start in the strike partnership for Atletico Madrid, with Angel Correa providing him company upfront.

Yannick Carrasco, who rejoined Atletico Madrid in the January transfer window, picks himself on the left side of the midfield, with club captain Koke set to be deployed on the right. Saul Niguez and Thomas Partey will partner up in the central areas.

At the back, Jose Maria Gimenez has proven his fitness and been picked in the travelling squad. However, the Uruguayan centre-back might not start, with Mario Hermoso and Stefan Savic forming the central defensive partnership. Sime Vrsaljko and Renan Lodi will be the full-back pairing, while Jan Oblak will start between the sticks. 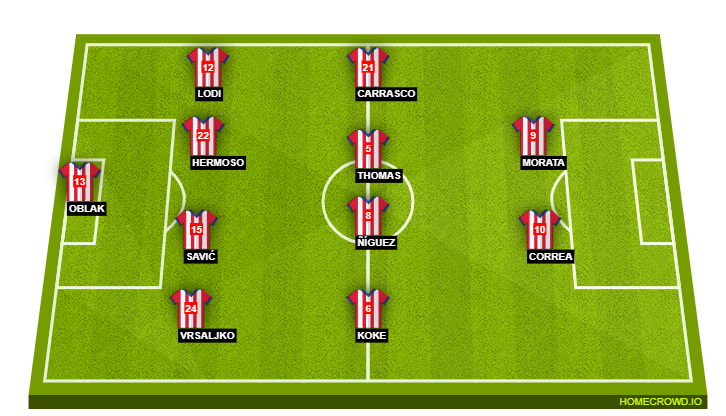 The go-to man in goal. (Photo by Denis Doyle/Getty Images)

It has been a rather inconsistent season for Atletico Madrid, with their defence also being uncharacteristically sub-par. In such a scenario, the onus is on Jan Oblak to play out of his skin and ensure that he keeps his side in the hunt week after week.

The Slovenian goalkeeper will once again be entrusted to be the goalkeeping extraordinaire when Atletico Madrid pay Valencia a visit on Friday. Another difficult away trip, another outing wherein the importance of Oblak cannot be overstated.

Two of the most disappointing teams in La Liga this season will lock horns at the Mestalla on Friday. However, Valencia seem to have the upper hand when one compares their home record against Atletico Madrid’s tally on the road this term.

Having said that, Atletico Madrid will fancy themselves owing to their strong recent run against Valencia. All in all, the profligacy of each side in the final third coupled with an underwhelming defence means it will be difficult to separate the two sides. The Hard Tackle, therefore, predicts a 1-1 draw.