Getafe and Valencia will go head-to-head at the Coliseum Alfonso Perez on Saturday, with just two points separating the two sides.

Matchday 23 of the 2019-20 La Liga season is already underway, with four matches scheduled for Saturday. The standout fixture on the day will pit third-placed Getafe with fifth-placed Valencia at the Coliseum Alfonso Perez, with the hosts just two points ahead of Los Che.

Getafe are enjoying another solid season, having been beaten just five times in 22 outings thus far. Like last season, a fine campaign has been built on the back of a solid defence – only three teams have conceded fewer goals than the Azulones. Heading into the game, Jose Bordalas’s men are on a run of three wins, in which they have not conceded a single goal.

Valencia, on the other hand, have recovered from a somewhat slow start to the season and have lost just one of their last 8 La Liga games. One of their positive results in this run includes the 2-0 win over reigning champions Barcelona, although Albert Celades & co. come into this game on the back of a shock defeat to Granada in the Copa del Rey quarter-finals.

The reverse fixture, played at the Mestalla back in September, ended in a 3-3 draw between Getafe and Valencia. Ahead of the latest meeting between the two sides, The Hard Tackle takes a closer look at the encounter.

Jose Bordalas has a near-full strength squad at his disposal. (Photo by Pierre-Philippe Marcou/AFP via Getty Images)

Jose Bordalas does not have many pressing injury concerns hampering his preparations ahead of the visit of Valencia. On Saturday, the Getafe manager will be without just one first-team player, with Filip Manojlovic recovering from a back injury. Otherwise, the hosts have a fully fit squad.

Bordalas should line his side up in a typical 4-4-2 formation, with David Soria taking his place in goal. In defence, the onus will be on Djene Dakonam to keep things organised, with Xabi Etxeita set to be his partner at the heart of the Getafe defence.

The full-backs, Damian Suarez and Mathias Olivera, will primarily sit back, but will be on the move when the Azulones launch their counters. Allan Nyom has been deployed in the midfield lately, playing just in front of Suarez, as Getafe look to sit in twin banks of four while off the ball.

On the opposite flank, Marc Cucurella will provide the creative spark when charging forward. Mauro Arambarri and Nemanja Maksimovic will sit in the central areas, looking to stifle Valencia in their build-up play.

Upfront, Jaime Mata and Deyverson will form the strike partnership, with the latter playing off Mata, who will aim to time his runs smartly into the box. 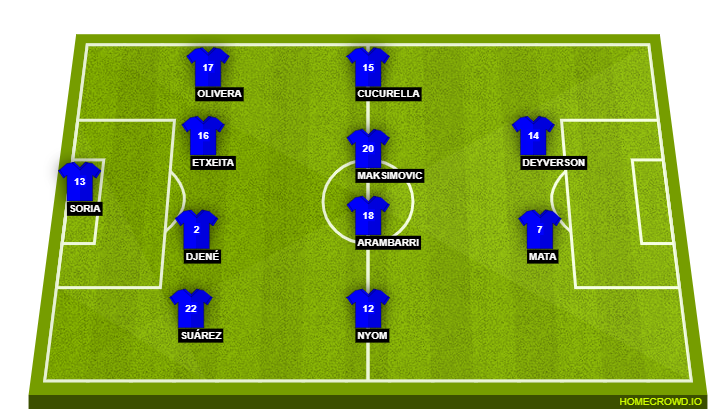 Unlike his counterpart in the Getafe dugout, Albert Celades has plenty of roster issues to contend with ahead of the trip to the capital. On Saturday, the Valencia manager will be without as many as nine first-team players due to injuries or suspension.

Daniel Wass and Francis Coquelin are both serving their respective one-match suspensions due to accumulation of yellow cards. Other than the banned duo, Valencia are also without Jasper Cillessen, Cristiano Piccini, Jaume Costa, Ezequiel Garay, Manu Vallejo, Denis Cheryshev and Kevin Gameiro.

Fortunately for Celades, he has enough cover in his squad to name a strong side. Jaume Domenech will be the man between the sticks, with the back four comprising of Jose Gaya, Gabriel Paulista, Mouctar Diakhaby and January signing Alessandro Florenzi.

In the absence of Wass, Ferran Torres will start on the right side of the Valencia midfield, while captain Dani Parejo will have Geoffrey Kondogbia for company in the central areas. On the left wing, Carlos Soler is a certain starter.

Finally, Rodrigo Moreno and Maximiliano Gomez pick themselves in the strike partnership due to the absence of Gameiro. Both Rodrigo and Gomez will start from a deeper position and look to use their pace to good effect in order to get the better of a stubborn Getafe defence. 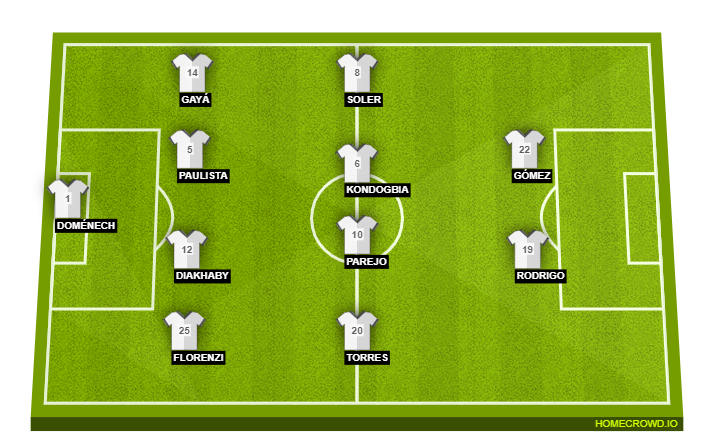 The difference maker for Getafe? (Photo by Pierre-Philippe Marcou/AFP via Getty Images)

After an impressive spell on loan at Eibar, it was always going to be interesting to see how Cucurella would do after sealing another move away from Barcelona. Suffice to say, the youngster has done well once again, having started every game in La Liga for Getafe.

His pace gives the Azulones the X-Factor that they need on their counter-attacks, taking the opposition by surprise. With Valencia themselves starting to tighten up at the back, Cucurella and his electric change of pace should hold Getafe in good stead. Could he be the difference maker for the hosts?

These are two teams that do not score goals by the bagful, so there is unlikely to be a lot of goalmouth action on offer on Saturday. In the end, the difference between Getafe and Valencia will depend on which side manages to hold their nerve in the key moments.

Marc Cucurella’s presence on the left flank could hold the key for Getafe, who ought to have just about enough to continue their fine run of form and just about edge Valencia. The Hard Tackle predicts a 1-0 win for Jose Bordalas & co. in a result that consolidates third place on the La Liga table.