Manchester City visit Carrow Road to take on newly-promoted Norwich City with Pep Guardiola expecting his side to keep pace with Liverpool at the top.

Norwich City have had to take Premier League life with a pinch of salt as they faced two ‘Big Six’ sides in their first month back to the top-flight. Their performances in those games certainly deserved credit, especially against Chelsea, who needed a late goal to get the better of them.

Liverpool, however, proved to be a different animal for them to control. The Canaries begin their second month back in the Premier League by facing Pep Guardiola’s formidable Manchester City side.

The defending champions are on their very own mission to catch hold of Liverpool at the top. Norwich City would bemoan the timing of this clash, but as is life in football, they have to face what is to come. Guardiola will be very much expecting his side to collect three points and maintain pace with Liverpool, who have had a perfect start to this season.

Manchester City are two points behind Liverpool after their draw against Tottenham at home on Matchday 2. However, in the game before that and those after it, the champions have been at their scoring best, with Raheem Sterling and Sergio Aguero leading the charge.

City thrashed Brighton & Hove Albion 4-0 last time out and seem unstoppable going forward at this moment. The Cityzens have outscored every team this season so far, with 14 goals in four games. Considering the form of their star players during the recent international break, Norwich have a gargantuan task at hand to stop Manchester City in their tracks.

If facing the ‘Big Six’ sides has been a problem so far for Norwich, they now have a raft of injuries to contend with before they face Manchester City. The recent additions to the treatment table would be Tom Trybull, who has an ankle injury.

The German midfielder has joined Timm Klose (knee) and Onel Hernandez (knee) on the sidelines. Moreover, key centre-back Christoph Zimmerman is now set to spend an extended time out injured due to complications with his foot injury. But, Norwich captain Grant Hanley is fit, albeit only enough to be on the bench.

Goalkeeper Tim Krul will face a late fitness test after suffering from an overstretching problem in training. Defender Ben Godfrey is also considered to be a major doubt after returning with a knock from his English Under-21 duty. In central midfield, along with Trybull, Mario Vrancic and Moritz Leitner are also ruled out due to their respective calf injuries.

In this situation, where all of Daniel Farke’s centre-backs are injured, he may have no chance but to play Godfrey, albeit with a heavy risk. Furthermore, the Norwich City boss might look to draft Alexander Tetty to cover in central defence, with new signing Ibrahim Amadou taking charge of defensive midfield duties.

Pep Guardiola would have been disappointed at the news of Aymeric Laporte’s injury diagnosis. The Frenchman is set to miss several months with the knee injury he picked up against Brighton. The news is especially concerning because of the lack of fit senior centre-backs in the squad.

John Stones, who could easily deputise for Laporte, is fit enough to return to the starting lineup. Nicolas Otamendi is available and expected to start alongside Stones at the heart of the Manchester City defence.

There is some positive news regarding the left-back slot, as Benjamin Mendy is closing in on a return. And, there are suggestions he might be on the bench against Norwich. It would undoubtedly benefit Oleksandr Zinchenko, who will have another chance to convince Guardiola to prolong his stay as the left-back.

Ilkay Gundogan left Germany’s camp with an illness and he could be a doubt to make this weekend’s game. David Silva, who is retired from international football, will be fresher and could be handed a start.

Kevin De Bruyne, Bernardo Silva and Raheem Sterling, all of whom helped their national sides to big wins are expected to start against Norwich, with Sergio Aguero leading the line for Manchester City once again, leaving the fit-again Gabriel Jesus to be his backup. 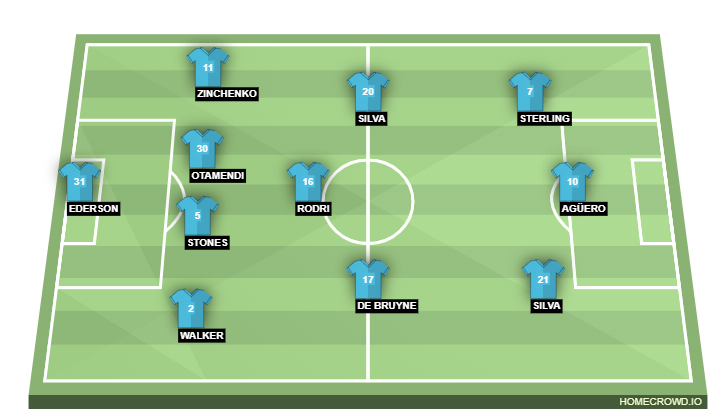 Is De Bruuyne back to his very best? (Photo courtesy: AFP/Getty)

There were suggestions from some corners that Manchester City did not miss Kevin De Bruyne last season as they clinched yet another Premier League title. The Belgian faced numerous fitness and injury concerns last term to play an able role in the triumph. However, this season, he is back, fit and showing everyone what they missed.

De Bruyne is proving his importance and continuing to grow as one of the best midfielders in the Premier League. He has become key for the side again this season and there is no doubt about him being the first name on the teamsheet. After yet another sensational performance for Belgium, De Bruyne is expected to continue his explosive form against Norwich. So, all eyes will be on him.

Norwich might have managed to score a goal past Liverpool on Matchday 1 and then two against Chelsea, but Manchester City are a different side altogether. Pep Guardiola’s men are rampant in front of goal, mean in defence and turn everything into solid three points, no matter where they go.

Norwich will find it difficult to contain the likes of Raheem Sterling, Sergio Aguero and Bernardo Silva. Furthermore, experienced stars such as David Silva and Kevin De Bruyne will make sure their side have the upper hand and play a crucial role to help get the goals.

Expect another dominant performance from Manchester City at Carrow Road to heap further misery on Norwich City as they continue to struggle upon their return to the top tier. The Hard Tackle predicts a 4-0 win for Pep Guardiola & co. to keep pace with Liverpool, who face Newcastle United earlier in the day.