Tottenham enter a decisive period of their season as they take on Brighton, with Mauricio Pochettino hoping for a response after the loss to Manchester City.

Tottenham leave behind a bittersweet week, where they lost two games to Manchester City within a space of three days, although they did eliminate Pep Guardiola’s side from the Champions League. Spurs now have a Champions League semi-final to look forward to, but Mauricio Pochettino will be urging his team to re-focus on the task at hand in the league.

The loss to Manchester City on Saturday looked to have been a blow to Spurs in the top four race, as their rivals had the chance to close the gap on them. Fortunately, both Manchester United and Arsenal suffered defeats to Everton and Crystal Palace, respectively, while Chelsea were held to a 2-2 draw by Burnley on Monday, meaning Spurs head into the Brighton game sitting third on the table.

Mauricio Pochettino needs a response from his side. (Photo by Oli Scarff/AFP/Getty Images)

Tottenham have been in awful form in the Premier League, having only taken 8 points from the last 24 on offer. In recent games, they have lost to Liverpool, City and Southampton to help their rivals to close in on them. Any dropped points, starting with Brighton will further add to their misery and put their chances of a top four finish in some doubt.

Their opponents, Brighton have been dragged into a relegation battle with Cardiff City lately. Chris Houghton’s side sit in 17th place and three points above Cardiff, who languish in 18th spot. Their recent form has not helped them much either, although their draw with Wolves in the last game came as a reprise for the Seagulls, who had lost their previous five games in a row.

Such a bad run of form has called Chris Hughton’s future into question after four progressive years at the club. To add a twist to the relegation battle, both Cardiff and Brighton have to face top six sides in their respective run-ins, although the Seagulls have played a game less than their rivals and have a superior goal difference as well.

There could be a raft of changes and returns in the Tottenham team following two games against Manchester City in the space of three days. Taking their last encounter into account, Mauricio Pochettino had made five changes to the side that played in the midweek Champions League fixture.

Hugo Lloris, Victor Wanyama, Moussa Sissoko, Kieran Trippier and Danny Rose were all missed out this past weekend due to different reasons, although Trippier, Rose and Wanyama are pushing for recalls to face Brighton. Lloris, who was replaced by Paulo Gazzaniga will likely be absent again due to a minor injury, as Pochettino hoping for the Tottenham captain to play against Ajax.

Dele Alli, who has also played the last two games with a protective cast on his hand might be awarded a rest, although it might depend on Pochettino’s late decision over the inclusion of Sissoko and Harry Winks. Son Heung-min, who is suspended for the semi-final first leg against Ajax, will be the man to lead the line for Tottenham, and he will have Lucas Moura and Christian Eriksen for support in attack. 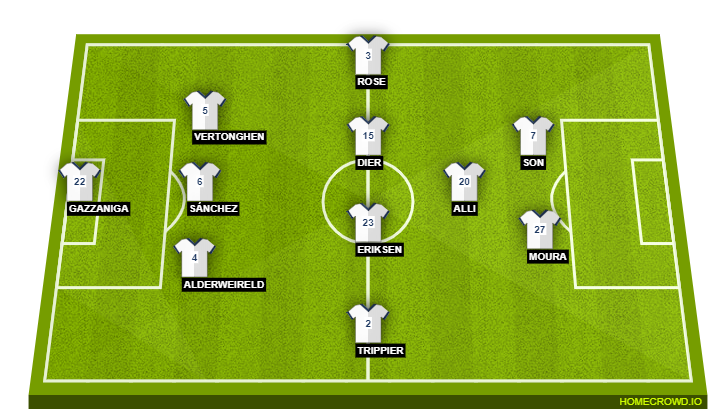 Davy Propper limped off against Wolves and is not likely to play any part in Brighton’s trip to face Tottenham. The midfielder has been a dominant presence in Chris Hughton’s team, featuring in 30 of the 34 Premier League games this season. Apart from Propper, Anthony Knockaert is another absentee as he serves the last of his three-match suspension for his red card against Bournemouth.

Hughton will look to maintain order in his defence, for it would be necessary for his side to not concede any goals at this stage. In fact, due to the return of Jurgen Locadia, the Brighton boss has an attacking option in him for the team, and the player will likely start.

Hughton will keep his formation much similar to the Wolves game with the likes of Martin Montoya, Shane Duffy, Lewis Dunk and Bernardo all starting in defence. Solly March, Beram Kayal, Dale Stephens, Locadia and Pascal Gross will remain part of a five-man midfield unit, all in support of Glenn Murray who will play as a lone striker up front. 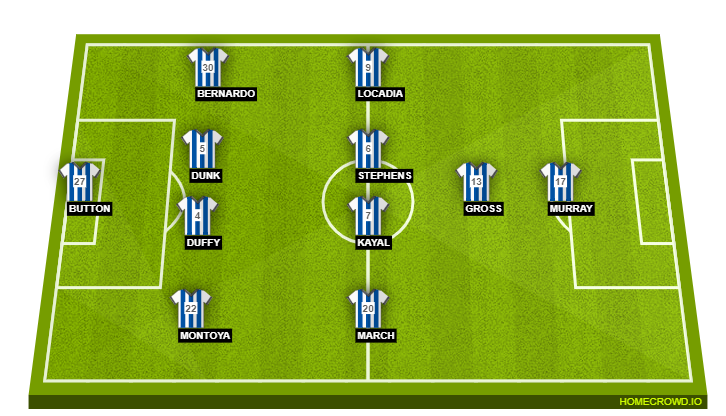 Will Eriksen rise to the occasion? (Photo by Laurence Griffiths/Getty Images)

Eriksen’s importance has come to the fore in Tottenham’s recent performances. With Harry Kane absent, probably for the remainder of the season, the pressure on Eriksen is more than ever, especially with Spurs reaching the Champions League semi-finals.

However, Eriksen has endured a somewhat patchy form lately, and while he was brilliant during their midweek clash with City, he has slightly struggled at times. Tottenham will rely on the Dane in the coming few games as they bid to reach their first ever Champions League final as well as finish in the top four of the Premier League.

Tottenham have played poorly in the past few weeks, but they look like a side with recharged batteries as they have a clear objective to play for now. The Champions League final seems like the purpose for now, but Pochettino will want his side to maintain form going into the clash. Against Brighton, they have the perfect opportunity to do so and regain their momentum in the top four race.

Brighton are scrapping it out with Cardiff for safety, although they can take some inspiration from the way they played against Wolves. Chris Hughton needs a miracle to beat Tottenham at their new stadium and will undoubtedly look for slim pickings, but Tottenham’s quality and mission are far too superior to the Seagulls’ and hence Spurs will beat them convincingly.