Barcelona will be aiming to stretch their lead at the top of the La Liga table when they welcome Valencia to Camp Nou on Saturday evening.

The transfer window has been slammed shut and it is now time for teams to return to footballing action on the pitch. There are some intriguing matches on show on Matchday 22 in La Liga, with the big game on Saturday being played at Camp Nou, where Barcelona will play hosts to Valencia.

Barcelona were a busy club during the January transfer window, and particularly on deadline day, when they completed the signing of two players. Now, it is back to business in La Liga, where Ernesto Valverde’s men are on an eight-match winning run and could open up an eight-point gap atop the table.

Valencia, on the other hand, are on a resurgent run, having started the season in a somewhat indifferent manner, with wins being hard to come by. While Los Che have still taken all three points from a match six times, the fact that they have lost the third fewest number of games in the league (four) means they are in contention for a place in European football next season as well.

The reverse fixture, played at the Mestalla in October, ended in a 1-1 draw, with Lionel Messi rescuing a point for the champions. Ahead of the latest meeting between the two sides, The Hard Tackle takes a closer look at the La Liga encounter.

The 6-1 thrashing of Sevilla will only inspire Barcelona towards better things. (Photo by David Ramos/Getty Images)

Ernesto Valverde has a few roster issues to deal with ahead of the visit of Valencia. On Saturday, the Barcelona boss will be without five first-team players due to injuries and suspension. The big absentee for the hosts will be Sergio Busquets, who will serve a one-match suspension due to accumulation of yellow cards.

In Busquets’ absence, Ivan Rakitic will be his natural replacement as the deepest lying midfielder. Arturo Vidal should take Rakitic’s place in the midfield unit, with Arthur assuming the creative responsibility for Barcelona.

Apart from Busquets, the likes of Rafinha (ACL rupture), Samuel Umtiti (knee), Jasper Cillessen (calf) and Ousmane Dembele (ankle) are sidelined due to injury. Umtiti has resumed light training, but is still some way off getting back to full fitness and is only likely to return sometime next month.

The return of La Liga action should see Marc-Andre ter Stegen return in the Barcelona goal, which would have happened anyway, with Cillessen injured. In defence, the usual suspects are expected to line up, with the only change seeing Nelson Semedo replace Sergi Roberto in the right-back slot.

As a result, deadline day capture Jean-Clair Todibo is only likely to make the bench at best, with his debut being delayed. Up ahead in attack, the trio of Lionel Messi, Luis Suarez and Philippe Coutinho pick themselves, particularly with Dembele still sidelined for a further week or so.

Valencia boss Marcelino will have Jose Gaya (hamstring) and Goncalo Guedes (hernia) unavailable for selection this weekend. Defender Mouctar Diakhaby is suspended for four matches, after his involvement in a mass brawl during Los Che’s Copa del Rey win over Getafe this week.

Fellow defenders Ezequiel Garay (concussion) and Gabriel Paulista (facial injury) trained with the squad, but will be assessed closer to the game. Geoffrey Kondogbia has been ruled out of the tie.

Toni Lato is likely to deputize at left-back in Gaya’s absence. Cristiano Piccini will line up as the right-back, while Paulista will form a new central defensive partnership with January signing Facundo Roncaglia, who could be thrust into action straight away on Saturday, with Diakhaby unavailable and Garay a major doubt.

Neto will likely take his place in the Valencia goal. In the middle of the park, Dani Parejo is a certain starter, with Los Che captain taking charge of driving his side forward while on the ball. Parejo should be partnered by Francis Coqeulin, who will be the anchorman in front of the back four.

With Guedes unavailable, Denis Cheryshev is likely to line up on the left flank, with Carlos Soler being deployed on the opposite side of the Valencia midfield. Upfront, Rodrigo Moreno and Santi Mina are certain starters, and Marcelino will be hoping that the former’s hat-trick in the cup game against Getafe will spur him on for another resounding performance against Barcelona. 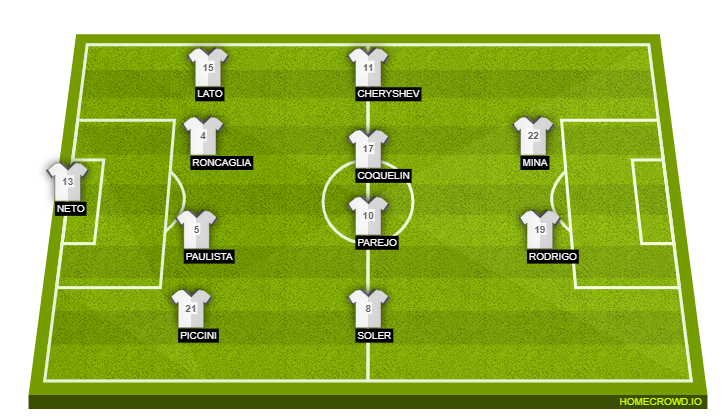 A relieved man, can Coutinho spark a solid run of form? (Photo by David Ramos/Getty Images)

A season that was threatening to spiral out of control suddenly has a glimmer of hope for Philippe Coutinho. While the Brazilian playmaker was still not at his creative best in the 6-1 trouncing of Sevilla, the two goals he scored would have certainly done wonders to his confidence.

Now, with a defensively resolute side like Valencia paying a visit to Barcelona, Coutinho has his biggest test yet to prove that the performance against Sevilla was not just a one-off. Also, with Ousmane Dembele nearing his return to action, the time is now for Coutinho to continue stepping up and inspire another positive result.

Ever since Marcelino sparked Valencia’s resurgence last season, Los Che have boasted one of the best defensive units in La Liga. Valencia have particularly reveled in their contests against Barcelona, having held them to a draw in successive league games, while only being beaten narrowly in the other game last season.

Barcelona though, are on a brilliant run of form in La Liga, having not been beaten in top-flight football for nearly three months. While goals are likely to be hard to come by, the hosts should have more than enough quality to grab all three points in the end.

All in all, it should be quite an even contest between the two sides, particularly in midfield. But, with Lionel Messi in inspiring form, The Hard Tackle predicts Barcelona to edge Valencia 1-0.