Barcelona are gearing up for their latest test as a spirited Inter Milan side pay Camp Nou a visit for a Champions League encounter on Wednesday.

Barcelona have had a stuttering start to the 2018-19 campaign. After a winless run of 4 league games, the reigning La Liga champions did return to winning ways, albeit at the cost of Lionel Messi, who is now out for an indefinite period with a shoulder injury.

Their form in the Champions League though, has been top notch, with dominant wins over PSV Eindhoven and Tottenham. A win here would mean a clean sweep of the first phase of the group stage, all but guaranteeing their spot in the knockout rounds.

Inter Milan, on the other hand, are blossoming under the tutelage of Luciano Spalletti, who was credited for AS Roma’s rise to the top echelons of Italian and European football in the recent times. Five wins out of five in Serie A, Inter Milan have also dispatched PSV Eindhoven and Tottenham, albeit in narrow wins.

The Nerazzurri are aware of Barcelona’s frailties of the back in recent times and will be looking to take advantage of the same, especially with their talisman Lionel Messi not available to affect proceedings. Their last trip to Camp Nou yielded a 1-0 defeat for the Italian outfit.

As the two teams prepare for the match, we take a closer look at the two squads.

The defensive line is already stretched by the absence of Samuel Umtiti and Thomas Vermaelen, rendering Ernesto Valverde with just Gerard Pique and Clement Lenglet as the only options in central defence. Sergi Roberto and Jordi Alba should slot in on either side of the pairing.

The midfield has looked out of sorts recently. Arthur Melo has been the lone bright spark and should be handed another start. Sergio Busquets is almost a certain starter against Inter Milan while the third spot is likely to be taken up by Ivan Rakitic.

With Lionel Messi unavailable, Ernesto Valverde will use it as an opportunity to perhaps, give Philippe Coutinho and Ousmane Dembele both a start. Malcom will remain an option from the bench, with Luis Suarez starting up front. The Uruguayan needs to build up some form, with a torrid start to the season so far.

Radja Nainggolan is the latest name to be added to the list of unavailable players. The Belgian is nursing an ankle injury suffered in the 1-0 win over AC Milan during the weekend and will have to sit the game out. Croatian stars Ivan Perisic and Marcelo Brozovic are both doubts for the game and despite being a part of the travelling squad, are unlikely to start against Barcelona.

Add to that the likes of Dalbert, Robert Gagliardini and Joao Mario, all of whom are ineligible to play for Inter Milan in the Champions League and Spalletti has a lot on his plate, as far as selection issues are concerned.

There is no reason for Spalletti to switch back to a three-man formation, with the manager likely to stick to the 4-2-3-1, a formation that the players seem comfortable with. Milan Skriniar and Stefan de Vrij are certain starters in central defence, with Sime Vrsaljko also likely to start in the right-back slot. Kwadwo Asamoah should guard the left flank for Inter Milan.

Matias Vecino and Borja Valero are the only natural options in holding midfield and the pair should start in the pivot of the 4-2-3-1. Spalletti could go for experience in attack, which should see Antonio Candreva being preferred over Matteo Politano on the right wing.

Keita Balde should start on the left, especially with Ivan Perisic doubtful for the game. Mauro Icardi is the obvious choice upfront, although Lautaro Martinez is an intriguing option and could come into play from the bench at some point during the game.

Alternatively, with Ivan Perisic doubtful, we could see Mauro Icardi start in the second striker role, with Lautaro Martinez playing as the focal point of attack, just ahead of the Inter Milan captain. 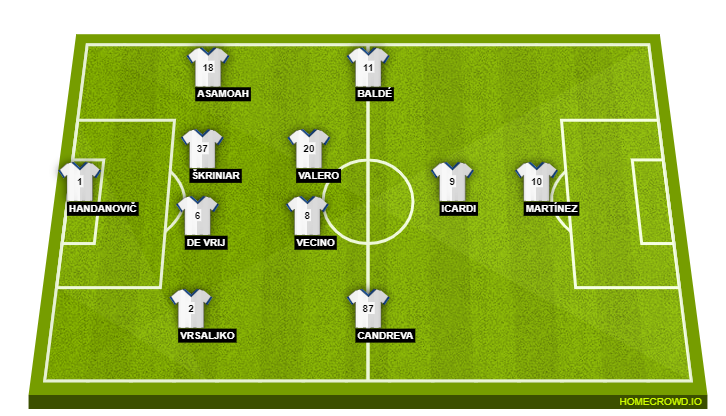 1. Inter Milan are on a seven-match winning streak in all competitions.

2. Barcelona have kept a clean sheet in each of their 4 home matches against Inter Milan in all competitions.

3. Barcelona are undefeated in 12 of their last 13 Champions League matches.

4. Despite their good form, Inter Milan have scored more than 2 goals only on occasion so far this season in all competitions combined.

With a few key players out injured, Luciano Spalletti could hand Lautaro Martinez a start upfront against Barcelona, with Mauro Icardi acting as the second striker. The youngster has already opened his account for Inter Milan. But, he is yet to start a game against a big side, let alone a team of Barcelona’s stature, that too on the big stage in the Champions League.

Even if he doesn’t start, chances are he will be thrown into the mix as the game goes on. A good cameo or a decisive performance could pave the way for a more regular role within the first-team for Lautaro Martinez. Opportunity awaits.

Honestly, we should actually go for an Inter Milan win. But, Barcelona have shown, even in their period of struggle in the league, that they are hard to beat, which is why we are going with a draw on Wednesday.

For the first time in recent years perhaps, Barcelona might not be the in-form side of the two going into the game. Lionel Messi’s absence will be costly. But, there is a feeling that the likes of Philippe Coutinho and Ousmane Dembele should step up in an attempt to make up for the Argentinian’s absence.

Expect an entertaining encounter. We have gone for a draw but do not be surprised if the match ends with Inter Milan grabbing all the three points at Camp Nou.