Matchday 1 of the UEFA Nations League will come to an end on Saturday, with several matches being played out across the four leagues. One such game to look out for features Switzerland and Iceland, who will face off against each other at the Kybunpark in St. Gallan, looking to get an early advantage in a tough group that also features Belgium.

Switzerland had a slightly sub par campaign at the 2018 FIFA World Cup, after being booted out in the Round of 16 by Sweden, in a match where they were favoured to win. Now back to the drawing board, Vladimir Petkovic will be aiming to make some crucial adjustments to facilitate a strong Nations League campaign.

Iceland, on the other hand, were eliminated from Russia 2018 at the very first stage itself. But, to chalk it down as a failure would be harsh judgement, considering the World Cup debutants were drawn in a rather tricky group. However, with Heimir Hallgrimsson no longer in charge of the Nordic outfit, a new era will begin under Erik Hamren.

The last time these two sides faced off was way back in September 2013, with a keenly contested affair ending in a pulsating 4-4 draw. Ahead of the latest meeting between the two sides, The Hard Tackle takes a closer look at the UEFA Nations League encounter.

Vladimir Petkovic has made a few alterations to the squad that he chose for the 2018 FIFA World Cup, ahead of Switzerland’s UEFA Nations League curtain raiser. While Michael Lang has missed out due to a knee injury, veterans Blerim Dzemaili and Valon Behrami were overlooked.

Behrami, in particular, may have played his final international game for Switzerland after being informed he will not be picked again, which was followed by the midfielder retiring from international football. With the 33-year-old no longer in the fray, Granit Xhaka will have to don the leadership role in the middle of the park.

Meanwhile, Dzemaili’s absence could see Xherdan Shaqiri drop into a more central role, from where he will look to combine with Xhaka and set up the bulk of chances for Switzerland. The direct consequence of Shaqiri’s change of position is likely to thrust Breel Embolo back into the side, with the youngster providing a pacy outlet on the right flank.

The big problems for the side though, has been scoring goals consistently, with Haris Seferovic not being a prolific customer inside the opposition box. But, at the back, the familiar faces should make up a solid defensive unit that has often been impenetrable at home.

Fabian Schar and Manuel Akanji should line up at the heart of the defence, with Ricardo Rodriguez and Stephan Lichtsteiner being the full-backs. Yann Sommer will likely be the goalkeeper aiming to put a stubborn front against the Iceland attack.

Like Petkovic, Erik Hamren has rung in the changes to his squad, with a number of high profile players missing out due to injuries or other reasons. For the current round of fixtures, the biggest names that are absent for Iceland are captain Aron Gunnarsson, Alfred Finnbogason and Johann Berg Gudmundsson.

While Gudmundsson is on the treatment table at Burnley, Gunnarsson and Finnbogason are working their way back from their respective knee problems, with the latest international games coming too soon for them.

In the absence of Gunnarsson and Gudmundsson, the onus in midfield will fall on Birkir Bjarnason, with Emil Halfredsson likely to give him company in the pivot. At the back, Hannes Por Halldorsson will likely continue between the sticks, with the quartet of Ragnar Sigurdsson, Sverrir Ingason, Birkir Saevarsson and Hordur Magnusson providing him cover.

Upfront, the creative responsibility will fall on the experienced shoulders of Gylfi Sigurdsson, who will look to shake off his recent slump in form to guide Iceland to their maiden victory over Switzerland. The big decision though, will be regarding the replacement for Finnbogason, with Kolbeinn Sigthorsson likely to get the nod. 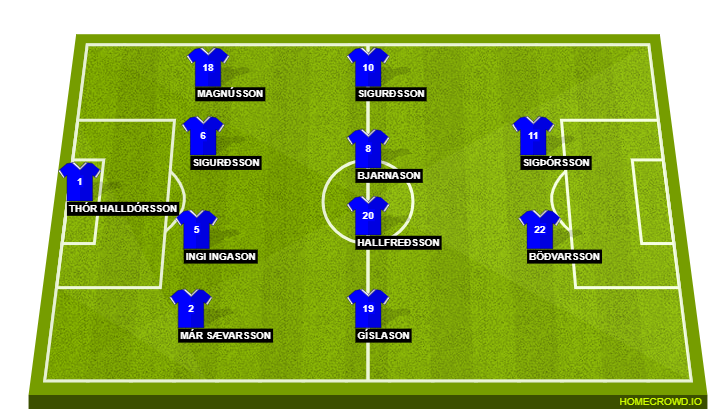 Time to move on from the disappointment of the World Cup. (Photo courtesy – Jan Kruger/Getty Images)

After an underwhelming campaign at the 2018 FIFA World Cup, Gylfi Sigurdsson hasn’t gone up and running for Everton under the tutelage of Marco Silva either. The extended run of poor form has given way to a frustrated figure, with the creative side to his game suffering the most.

The 28-year-old now has the chance to start afresh on the international stage, with Erik Hamren taking charge of the Iceland National Side. Likely to be given a free role, Sigurdsson will have huge responsibilities on him, and his performance will go a long way in determining whether Iceland are able to break their duck against Switzerland.

Switzerland vs Iceland has usually tended to go one way for the most part, with the Nati having the number of their Nordic opponents. And, all things considered ahead of their latest meeting, it looks like Iceland might have to wait a little while longer to notch up their first win against the Swiss National Side.

Aron Gunnarsson and Johann Berg Gudmundsson are big misses for the visitors, especially considering Gylfi Sigurdsson doesn’t come into the international break in good form. In the opposition camp, Xherdan Shaqiri will have a point to make, and while it should be a close contest, The Hard Tackle goes for a 1-0 win for Vladimir Petkovic & co.