Turkey and Russia will kickstart proceedings in Group 2 of the UEFA Nations League B when they meet at the Senol Gunes Stadium on Friday night.

As far as World Cup tournaments go, Russia will long be associated with holding one of the best finals in the history of the competition. The national side must now turn its attention towards succeeding at the UEFA Nations League, starting on Friday when they face off against Turkey at the Senol Gunes Stadium.

Turkey had failed to qualify for the 2018 FIFA World Cup after finishing a disappointing fourth in the UEFA Qualifying Group I, meaning they last played a match in early June. But, with the UEFA Nations League set to be one of Mircea Lucescu’s final tournaments as a coach, motivation is unlikely to be lacking in the Turkish camp.

Russia, on the other hand, were one of the many success stories of the 2018 FIFA World Cup. Written off at the start of the tournament, the Sbornaya went on to reach the quarter-finals, beating Spain along the way and taking Croatia to penalties before eventually being beaten. Stanislav Cherchesov & co. will now aim to build on where they left at Russia 2018 when they start off in the Nations League.

The last time these two sides locked horns was ahead of the 2018 FIFA World Cup, with the match ending in a 1-1 draw. Ahead of the latest meeting between Turkey and Russia, The Hard Tackle takes a closer look at the UEFA Nations League encounter.

There weren’t many surprises in store when Mircea Lucescu named his squad for the latest round of international fixtures. Volkan Babacan is the only big-name player missing from the 28-man squad picked by the Turkey boss, meaning Sinan Bolat is likely to be the first-choice goalkeeper in the week to come.

At the back, Lucescu usually refrains from making changes, choosing to stick with a stable four-man defence. Therefore, Caglar Soyuncu is likely to get the nod at the heart of the Turkish defence, even though he hasn’t played much at the club level this season.

Giving the 22-year-old company in the central defensive partnership, should be Kaan Ayhan, with Sener Ozbayarkli and Hasan Ali Kaldirim being the full-backs. In the middle of the park, Mehmet Topal should be donning the armband, with the 32-year-old looking to keep the midfield and defence organised and disciplined.

Okay Yokuslu and Mahmut Tekdemir are likely to make up the numbers in the midfield trident, aiming to create overloads in the middle of the park while also recycling the ball quickly. Upfront, Cenk Tosun will be aiming to continue his good recent form for the national side, when he lines up as the striker.

Giving him company in the attacking unit, should be Hakan Calhanoglu, who will pose a threat with his dead-ball prowess, and Cengiz Under, whose pace and trickery will add dynamism in the final third for Turkey. Alternatively, Calhanoglu’s place could also be taken up by the maverick Yusuf Yazici. 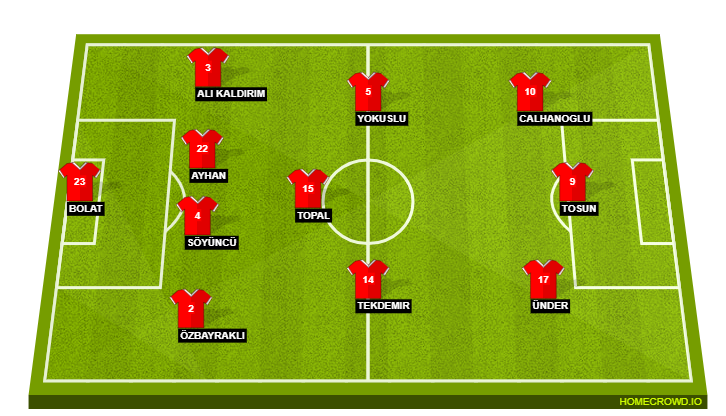 There were a number of surprises in store when Stanislav Cherchesov announced his squad for the latest round of international fixtures. While the likes of Sergei Ignashevich, Yuri Zhirkov and Aleksandr Samedov had already hung up their boots, the Russia boss excluded a number of others World Cup stars as well.

Igor Akinfeex and Aleksandr Golovin have not found a place in the squad for the next fortnight due as they continue recovering from injuries. But, the absence of Alan Dzagoev, Fyodor Smolov and the Miranchuk twins will have raised some eyebrows.

Golovin’s absence, in particular, could hurt the Sbornaya, and the onus will now be on Denis Cheryshev to provide the cutting edge in the final third, with Artem Dzyuba being an outlet inside the Turkey box. The 30-year-old Zenit St. Petersburg striker will also have the added responsibility of leading the side in the latest international fixtures.

There will be a couple of familiar faces in the middle of the park as well, with Roman Zobnin and Yury Gazinsky providing an assured presence in the midfield pivot. Meanwhile, the returning Georgi Dzhikiya would be a solid replacement for Ignashevich at the heart of the Russian defence, with Roman Neustadter, Mario Fernandes and Fyodor Kudryashov giving him company in the back four.

A star in the making. (Photo courtesy – Alberto Pizzoli/AFP/Getty Images)

Emre Mor may have seen the spotlight shining on him when he first broke onto the scene. But, if there’s someone who has taken to senior football emphatically, it’s Cengiz Under. The 21-year-old already has four goals for the national side, and has been going from strength to strength for AS Roma.

Possessing a clever change of pace and a bagful of tricks, Under also has a stable head on his shoulders, with his decision making one of his big assets. Against a Russian side that is not exactly known for its defensive solidity, Under could have a field day, paving the way for a huge Turkey win.

Like each of the previous encounters between these two sides, the latest meeting between Turkey and Russia should be a closely contested affair. This time around though, Turkey look well placed to break their duck against the Sbornaya. While Stanislav Cherchesov won’t have a boisterous home crowd to egg his men on, the absence of key World Cup stars will hurt too.

Turkey, on the other hand, have gone on to find stability under the tutelage of Mircea Lucescu, and will be a hard side to break down, especially by a Russian side that does not have a lot of goals in them. The Hard Tackle predicts a night to remember for Turkey, with a 1-0 win to record their first success against Russia.