Belgium will look to begin their preparations for the UEFA Nations League on a positive note when they face Scotland at Hampden Park on Friday.

The demographic of matches between European nations is changing, with the UEFA Nations League set to kick off this week. Before their respective campaigns in the tournament begins though, Scotland and Belgium will be aiming to return to action with a bang when they lock horns at Hampden Park on Friday.

It has been a while since Scotland last played a match, having failed to qualify for the 2018 FIFA World Cup. The Tartan Terriers were on the wrong end of the result in their last game, played in early June, and Alex McLeish has overseen just one win since replacing Gordon Strachan at the helm.

Belgium, on the other hand, will be riding a wave confidence after enjoying their best ever finish at a World Cup finals, having finished third in Russia 2018. What will further have provided the Red Devils a boost is the fact that Roberto Martinez and Thierry Henry are still a part of the national setup, after being linked with a few club jobs in recent months.

The last time the two sides faced off was in September 2013, when McLeish and Martinez’s predecessors, Gordon Strachan and Marc Wilmots were still in charge of the teams. Belgium won the tie 2-0, and ahead of the latest meeting between the two sides, The Hard Tackle takes a closer look at the encounter.

Life back as Scotland boss has hardly been easy for Alex McLeish, and things don’t seem to be improving just yet for the experienced manager. The Tartan Terriers have been deprived of the services of stalwarts such as Tom Cairney, Matt Phillips, Oli McBurnie and Jack Hendry, who have all pulled out due to their respective injuries.

In their stead, a couple of familiar faces return, with Ryan Jack, Robert Snodgrass and Steven Naismith being called up. For Naismith, it is seemingly a second coming, after kicking off the season in stunning fashion with Hearts – seven goals and three assists in just eight appearances across all competitions.

His impressive performances at club level could catapult the 31-year-old straight into McLeish’s side, considering he will be Scotland’s most experienced outfield player in the next couple of weeks. Another player who has come into the international break on the back of some inspiring form is Ryan Fraser.

The 24-year-old has been Bournemouth’s best player thus far, and is likely to be given the nod on the left flank, from where he will aim to provide a pacy outlet. On the opposite side of attack, James Forrest should start, looking to be the creative force for Scotland.

In the middle of the park, McLeish has a number of option, albeit inexperienced ones. But, with the aim of adding steel in midfield, Kevin McDonald, Stuart Armstrong and John McGinn are likely to form the central midfield triad that will aim to create overloads while getting in behind the ball while out of possession.

In defence, the Scotland boss is likely to employ a compact back-four so as to stifle the Belgium attack. Newly appointed captain Andrew Robertson is a definite starter as the left-back, with Stephen O’Donnell expected to be the right-back. At the heart of defence, Charlie Mulgrew’s usual partners are out injured, meaning the inexperienced Graeme Shinnie is likely to get the nod. 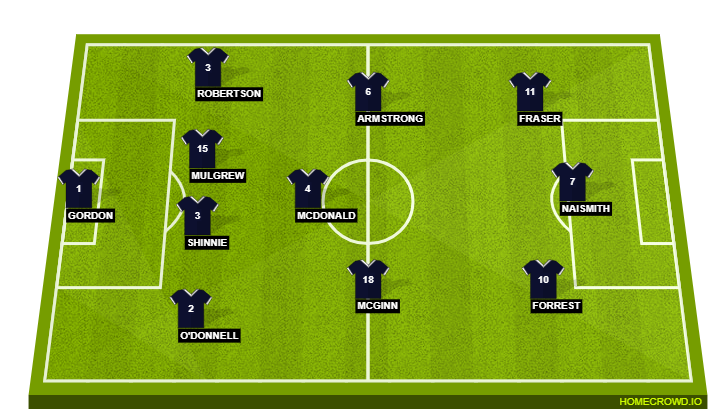 As is the case with McLeish, Roberto Martinez is missing a couple of familiar names as well, with Kevin De Bruyne and Adnan Januzaj unavailable due to injury. Meanwhile, the Belgium boss has chosen to blood in a few fresh faces, with Timothy Castagne, Hans Vanaken, Birger Verstraete and Leandro Trossard receiving their first call-up.

In the absence of De Bruyne, Youri Tielemans could be handed the responsibility of providing the creative edge in midfield. The AS Monaco midfielder is likely to have Marouane Fellaini for company in the middle of the park, with Yannick Carrasco and Nacer Chadli being the wing-backs.

Indeed, Martinez is likely to stick with his favoured 3-4-3 formation, with a solid back-three of Toby Alderweireld, Jan Vertonghen and Dedryck Boyata looking to provide a commanding presence in defence. Boyata, in particular, could use the match to make a statement after facing ridicule from Celtic fans at Hampden Park.

Thibaut Courtois might use the international games as a way to get back to optimum match fitness, having played just once for Real Madrid thus far this season. The front trio should be filled with familiar faces in Eden Hazard, Dries Mertens and Romelu Lukaku, with the likes of Thorgan Hazard, Michy Batshuayi and others getting their chances from the bench.

Since becoming a senior professional footballer, Robertson has seen his career graph go in just one direction – up. His move to Liverpool last year has only gone on to elevate his status in world football, where he is now regarded as one of the best left-backs.

The 24-year-old has now gone on to reach the pinnacle of his career thus far, after being entrusted with the responsibility of being Scotland captain. Against a Belgium side that doesn’t let up often, it will be up to Robertson to not just do his own job well, but also organise the backline. If he manages to do so, a popular result may be on the cards for Scotland.

Friday’s friendly at Hampden Park seems to be a battle of the unequals, at least on paper. Scotland and Belgium are on the opposite end of the spectrum, as far as their stages of project under Alex McLeish and Roberto Martinez, respectively, are concerned.

Scotland are still finding their feet under McLeish, and another tough match awaits them against the World Cup semi-finalists. Belgium, on the other hand, will be confident and should not have any trouble getting past the Tartan Terriers on the night. The Hard Tackle predicts a 3-1 win for Martinez & co.