The UEFA Nations League will kick off with a mouthwatering clash, when Germany welcome France to the Allianz Arena on Thursday.

The much anticipated UEFA Nations League is finally here, pitting teams across Europe in a league format based on their rankings. Kicking things off in the tournament, will be the last two World Cup winners, as Germany and France lock horns at the Allianz Arena in Munich on Thursday night.

Germany were one of the overwhelming favourites to retain their crown at the 2018 FIFA World Cup. But, to everyone’s surpsise Joachim Low & co. were booted out of Russia in the group stage itself, with their final game ending in a humbling 2-0 defeat to South Korea. Despite the debacle, Low has kept his job, and will look to usher in a successful new era for Die Mannschaft.

France, on the other hand, were the standout, most consisted side at Russia 2018, wherein they ended up lifting the Jules Rimet trophy. The tournament saw the incredibly talented Les Bleus finally do justice to the immense potential the entire squad possesses, and Didier Deschamps will now look to build on that with the Nations League.

The two sides last faced each other 10 months ago, with the match ending in a keenly contested 2-2 draw. Ahead of the latest meeting between Germany and France, The Hard Tackle takes a closer look at the UEFA Nations League encounter.

Joachim Low will be looking to rally his troops and kickstart a new era of dominance. (Photo courtesy – Alexander Hassenstein/Bongarts/Getty Images)

To the surprise of many, Joachim Low decided to stay on as the Germany boss despite the World Cup debacle, vowing to stay on and rebuild a fallen giant. The road to redemption begins on Thursday for his men, and the head coach has called up a number of fresh faces while dropping a few who flattered to deceive at the World Cup.

One player who was set to be missing before the squad was even announced is Mesut Ozil, who announced his retirement from international football after claims of racism in the aftermath of his meeting with Turkish president Recep Erdogan.

To fill up the spot vacated by the maverick playmaker, Low does have  a couple of options to consider in Thomas Muller and Kai Havertz. On Thursday though, Muller might be the one to get the nod in a central role, with the teenager having to wait till the game against Peru for his international debut.

But, another new face is set to be blooded in against France, with Nico Schulz likely to earn his maiden cap for Die Mannschaft on the left side of defence. The rest of the back four though, should have familiar names, with Jerome Boateng and Mats Hummels being the central defensive partnership, and Joshua Kimmich the right-back.

In the middle of the park, the creative onus will fall on Toni Kroos, who should have Ilkay Gundogan for company in the midfield pivot. In attack, Low might choose to go for a more direct approach by starting Julian Brandt and Marco Reus on either flank, with Muller being instructed to do what he does best – be an outlet in and around the opposition box.

Upfront, the choice is between Timo Werner and Nils Petersen. Against France, the RB Leipzig striker is likely to get the nod, although Muller might be an option to be the focal point of attack as well.

While there has been some uncertainty in the German camp, France seem to be riding on a wave of confidence and optimism following a spectacular triumph at the World Cup. And, Didier Deschamps has stuck to the winning formula for the latest set of international fixtures, with only the goalkeeping department witnessing some changes.

The changes though, have been forced due to injuries sustained by Hugo Lloris (thigh) and Steve Mandanda (muscle injury). With the veteran duo pulling out of contention, Benjamin Lecomte has earned his first international call-up. Against Germany, however, Alphonse Areola is likely to make his France debut, at long last.

The rest of the side though, should retain a sense of familiarity from the World Cup, with the back four of Benjamin Pavard, Raphael Varane, Samuel Umtiti and Lucas Hernandez likely to retain their places. In the midfield pivot, the dynamic duo of N’Golo Kante and Paul Pogba will provide the oomph while aiming to stifle the likes of Muller and Kroos.

Upfront, Kylian Mbappe and Antoine Griezmann are the difference makers for Les Bleus, with their eye for goals and nippy movement. On the left flank though, the pacy outlet of the in-form and confident Ousmane Dembele could be brought back to test the mettle of Kimmich.

Upfront, Olivier Giroud will not just liberate Griezmann, but will also be looking to end his scoring drought at the international level, having failed to find the back of the net at the World Cup. 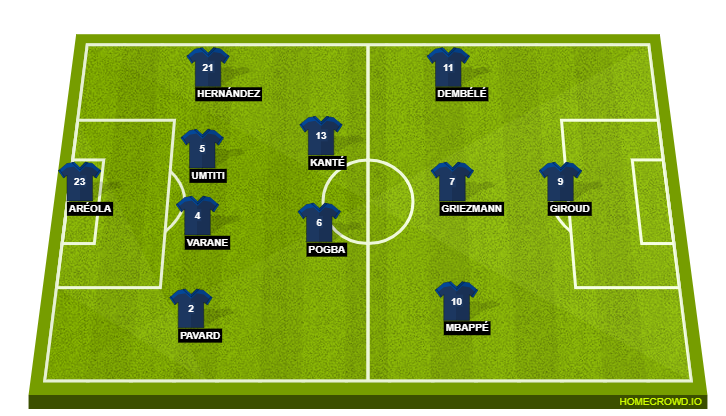 Kroos will need to be firmly focused on getting Germany back to winning ways. (Photo courtesy – Alexander Hassenstein/Bongarts/Getty Images)

One of the many players who failed to bring their A-Game at the World Cup for Die Mannschaft, Kroos struggled to assert his dominance in midfield and looked jaded for the most part. But, the 28-year-old also got the last goal that Germany scored in Russia, something that he will take heart from.

Now, having started the 2018-19 season strongly with Real Madrid, Kroos will be eager to exorcise the demons of the World Cup by getting back to his best on the international stage. And, if he manages to pull the strings from the middle of the park, Germany might just be on their way back to the top.

With the last two World Cup winners locking horns at the Allianz Arena, the UEFA Nations League is set to kick off on the best note possible. The road to redemption for Germany though, begins on the toughest note possible, with a France side that is brimming with confidence paying them a visit.

But, there is also a sense that it can’t get any worse for Joachim Low & co. And, if they play like there’s nothing to lose France will have a tough time continuing their winning run. On Thursday though, there will unlikely be much to separate the two sides, and The Hard Tackle predicts a 2-2 draw between the European powerhouses.