The World Cup is done and dusted, and teams in Europe will now start to turn their attention towards a new competition called the UEFA Nations League. But, before that, Austria and Sweden will battle it out in a friendly, when they meet at the Generali Arena in Vienna on Thursday night.

Austria missed out on the World Cup after finishing 4th in UEFA Qualification Group D of the qualifiers. Franco Foda’s men last played a match in June, as part of the warm-up fixtures for Russia 2018, when they were beaten 3-0 by Brazil.

Sweden, on the other hand, were one of the many success stories of a crazy 2018 FIFA World Cup, where they went on to defy expectations and reach the quarter-finals. Janne Andersson’s men were one of the most defensively resolute sides in the competition, but were stopped in their tracks by England.

The two sides last faced off against each other in 2015, when Austria cruised to a 4-1 win over Sweden. Ahead of their latest meeting on Thursday, The Hard Tackle takes a closer look at the encounter.

Franco Foda will look to get his squad into right shape for the UEFA Nations League. (Photo courtesy – Johann Groder/AFP/Getty Images)

Franco Foda was the first German to be appointed in charge of the Austrian National Side, when he was named the head coach in October. Thus far, the 52-year-old has overseen just five games, and has started his stint as the Austria boss strongly, winning four of those matches.

As is the case with any new manager, Foda too, has experimented with a number of formations in his first five games in-charge. But, recent matches suggest that he is likely to settle with a system that employs a back-three, with four men in midfield.

It’s the attacking unit that needs to find its feet, with Foda choosing to either employ two wide men or inside forwards who play off the central striker. Regardless, the head coach seems to have settled in on a solid base for the next two years, and beyond.

On Thursday though, Foda might experiment a little as far as team selection is concerned. At the back, Sebastian Prodl and Aleksandar Dragovic could have Kevin Wimmer for company, with Stefan Lainer and David Alaba the wing-backs.

In midfield though, the absence of Julian Baumgatlinger means the young duo of Florian Grillitsch and Alessandro Schopf will likely be the central midfield partnership. But, it is the selection in attack where Foda will look to experiment the most.

Marcel Sabitzer could get his first start under the new head coach, starting on the right side of attack. Marko Arnautovic could get the nod on the left flank, instead of his usual role as the focal point of attack, with Guido Burgstaller starting upfront. 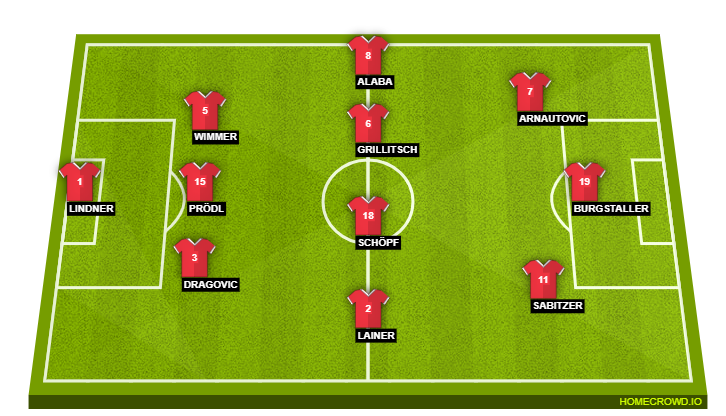 As compared to Foda, Janne Andersson has a more settled unit and system at his disposal – one that brought him a lot of success at the 2018 FIFA World Cup. The 55-year-old is likely to continue in a similar mould, although he should take the friendly as a game to test some new players as well.

Robin Olsen should retain his spot between the sticks, but there could be a couple of changes in the back four. While Mikael Lustig is likely to continue as the right-back against Turkey, Emil Krafth could get the nod on Thursday. At the heart of the Swedish defence, there are unlikely to be any surprises, but Niklas Hult might get the nod as the left-back.

In midfield, the big surprise has been the exclusion of Emil Forsberg, who is likely to be replaced by Sam Larsson on the left flank. The rest of the first-choice midfield quartet though, should remain unchanged, although the likes of Oscar Hiljemark, Robin Quaison and Ken Sema could get a look in later in the second half.

Upfront, Ola Toivonen hasn’t been selected, which will see another fringe player getting a start alongside Marcus Berg. On Thursday, Isaac Kiese Thelin should get the nod as Berg’s strike partner, with John Guidetti being named on the bench.

Lindelof will look to put the misery of the past month behind him. (Photo courtesy – Matthias Hangst/Getty Images)

The 2018-19 season was supposed to be one wherein Victor Lindelof would finally go on to cement his place in the first-team setup at Manchester United, what with his inspired performances at the World Cup. But, that hasn’t turned out to be the case, with the Swede still struggling to adapt to Premier League football.

The latest round of international fixtures though, will come as just the antidote he needs to get his confidence back in familiar surroundings. With the experienced Andreas Granqvist by his side, the 24-year-old should produce a more assured performance. And who knows, he might return to Old Trafford with renewed vigour.

This is a match that has historically been full of goals, and Thursday shouldn’t be any different. With both managers trying out a few new things, neither side will cut a perfectly cohesive look, which would ultimately lead to a more open contest.

Sweden though, with their compact defensive style should keep the scoreline a lot more respectful than the last time they met Austria. Janne Andersson’s men are also carrying a lot of confidence from their run at the World Cup. But, they might not have enough firepower to get past the confident hosts. The Hard Tackle predicts a closely contested 1-1 draw.