Burnley and Manchester United will be eager to return to winning ways when they face off against each other at Turf Moor on Sunday.

The first international break of the European season is nearly upon us. Bringing an end to the action in the Premier League on Sunday will see two sides that are in complete disarray at the moment, as Burnley and Manchester United lock horns at Turf Moor, looking to end Gameweek 4 on a high.

Burnley are yet to win a game after three games this season, having only amassed a solitary point thus far. The Clarets are just one place off the bottom of the table, and will now have the complete attention on domestic football after being knocked out in the final qualifying round of the UEFA Europa League.

Manchester United, on the other hand, find themselves in unfamiliar territory, having lost two of their first three games of the season. Their latest result – the 3-0 loss to Tottenham at Old Trafford – would have rocked Jose Mourinho & co., who are now in the bottom half of the table.

The corresponding fixture last season ended in a 1-0 win for Manchester United, courtesy an Anthony Martial goal. Ahead of their latest meeting on Sunday, The Hard Tackle takes a closer look at the encounter.

Burnley will be eager to move on from their disappointing European journey quickly. (Photo courtesy – Clive Mason/Getty Images)

Sean Dyche has a number of injury concerns to deal with ahead of the visit of Manchester United. On Sunday, the Burnley boss will likely be without five first-team players due to various fitness problems, with the big issues coming in attack.

Robbie Brady (hamstring), Steven Defour (calf) and Johann Berg Gudmundsson (hamstring) are all on the treatment table, and their absence will deprive the hosts of a lot of creativity. The good news though, is that the trio is likely to be available post the international break, reducing Dyche’s problems considerably.

But, in their absence, the onus in the final third will fall on Aaron Lennon’s experienced shoulders, with Jeff Hendrick probably playing in a makeshift left wing slot for one week. Hendrick’s shift in position could thrust Matej Vydra in the starting lineup, with Sean Dyche opting for a 4-4-2 formation on Sunday.

The rest of the side pretty much picks itself up, with Joe Hart, Matthew Lowton, James Tarkowski, Ben Mee and Stephen Ward completing the defensive unit. In midfield, Jack Cork will be the lynchpin of the side, looking to keep the men around him disciplined and organised. Upfront, Chris Wood will be the target man for Burnley. 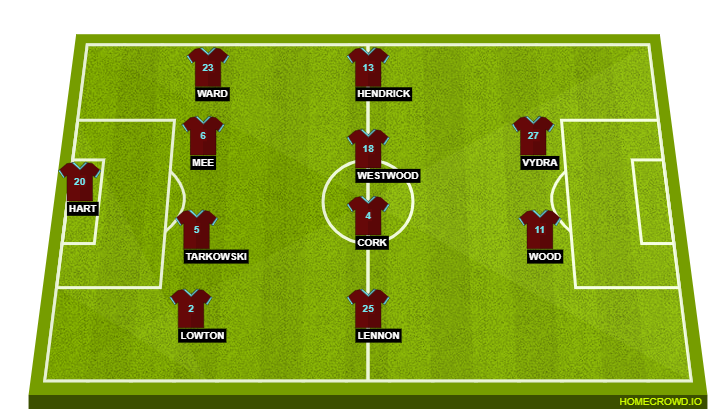 Jose Mourinho does not have many pressing roster issues on the hands ahead of the short trip to Burnley. Instead, the Manchester United boss is grappling with major problems on the pitch, with very few players in his squad managing to do anything of note thus far this season.

The players who are unlikely to feature though, are Phil Jones, Diogo Dalot and Sergio Romero. But, Dalot and Romero are on the verge of making their first appearance in a matchday squad after playing for the under-23 side this week. Marcos Rojo is back in training after recovering from an injury he sustained at the World Cup, although he is unlikely to feature on Sunday.

Meanwhile, Mourinho is likely to ring in the changes once again this week, with the likes of Eric Bailly and Alexis Sanchez among those who should return. Victor Lindelof is expected to be axed after a disastrous performance in the second half against Tottenham, while Ander Herrera will give way to Sanchez so as to bring in more attacking impetus.

Fred was somewhat of a positive against Tottenham, and his forward forays will be key in breaking down the Burnley defence, especially with Paul Pogba not looking up to the mark. Jesse Lingard too, will be a vital cog, with his driving runs, and the English international will be aiming to improve on his showing from last game.

The two men who really need to own up to their performances though, are Pogba and Romelu Lukaku, arguably the two most disappointing players for Manchester United. The duo are supposed to be the leaders in Jose Mourinho’s side, but have seldom done anything to inspire their teammates after a couple of tepid displays.

Luke Shaw though, will be hopeful of continuing a splendid start to the season, aiming to link up well with Alexis Sanchez and create a formidable partnership down the left flank. On the opposite side, Antonio Valencia is another player who will need to pull his socks up.

Looking to get one up over the old enemy. (Photo courtesy – Dan Mullan/Getty Images)

His stint at Manchester City may have ended in an anti-climactic fashion, but Joe Hart will still look to please those at his previous club by getting one over Manchester United. What better way to do so, than produce a solid statement performance that will also serve as a reminder of his ability to his detractors.

Burnley will already be a hard side to break down, despite their obvious issues at the back. But, a vintage Joe Hart performance will amp up the desperation among Jose Mourinho’s men, leaving them ripe for the taking for the Clarets, who still remain in search of their first league win of the season.

The final game of the week will feature two sides who will be extremely desperate to collect all three points on Sunday. For Burnley, a win is vital to get the good feeling back at Turf Moor after a tough start to the season. Manchester United, on the other hand, need all three points to keep up with their rivals, who are threatening to pull away from them in the title race.

On Sunday, Jose Mourinho’s men have an advantage, even if it is a slight one, with Burnley likely to have some tiring legs after their midweek European fixture. Expect a few big hitters to signal a return to form for Manchester United, although the hosts will likely have their say as well. The Hard Tackle predicts a 2-1 win for Mourinho & co.