The first month of the Premier League season will come to an end this weekend. One of the final games of the week will see a London derby being played out between two sides that are yet to drop a point this term, as Watford play hosts to Tottenham at Vicarage Road on Sunday.

Watford have been an early surprise package of the season, having embarked on their best start to a league campaign by winning each of their first three games. Their confidence would have further been boosted after progressing in the League Cup, with the team looking well gelled into Javi Gracia’s system now.

Like their hosts, Tottenham are enjoying a perfect start to the 2018-19 Premier League season as well. While they haven’t quite been at their fluent best thus far, Mauricio Pochettino’s men are starting to find their rhythm, and their 3-0 win over Manchester United signals a coming of age for a side that could be genuine title contenders this season.

The corresponding fixture last season was a keenly contested 1-1 draw, with Davinson Sanchez being sent off early in the second half. Ahead of the latest meeting between two sides on Sunday, The Hard Tackle takes a closer look at the encounter.

Javi Gracia does not have any major injury problems to deal with ahead of Tottenham’s visit on Sunday. While the Watford boss could have as many as four players unavailable against Spurs, none of those absentees present a huge concern.

To brighten up things further, two of the players are on the verge of being available, with Miguel Britos (knock) and Gerard Deulofeu (groin) recovering from their respective issues, although the latter will likely be . That would leave Tom Cleverley (Achilles) and Younes Kaboul (foot) as the only players still unavailable.

Gracia though, will unlikely be fazed as his first-choice starting lineup, which has remain unchanged so far this season, has served him quite well. The same side should continue on Sunday as well, with Ben Foster having a key role against a Tottenham side that is likely to test him with a barrage of shots.

In front of the Englishman, Gracia will bank on twin banks of four to kill off the space and stifle the Tottenham attack. The central players in defence and midfield will be key in holding their line while the full-backs – Jose Holebas and Daryl Janmaat – will aim to charge forward at every given opportunity.

The presence of the bombarding full-backs means that wide attackers, Roberto Pereyra and Will Hughes will look to create overloads in central areas and help release Andre Gray and Troy Deeney further forward. Pereyra’s directness, in particular, will help provide a threat from distance, with Abdoulaye Doucoure also posing a threat with his long-range efforts. 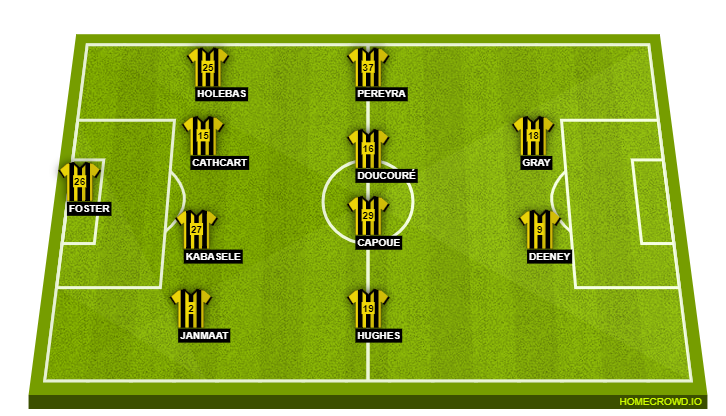 Unlike Gracia, Mauricio Pochettino has a few pressing roster issues to deal with ahead of his side’s short trip to Watford. On Sunday, the Tottenham boss could be without as many as seven first-team players due to various injury problems.

The big problem for Pochettino is the unavailability of captain Hugo Lloris, who will not be able to feature this week due to a thigh injury. Fortunately for the Tottenham manager, the Frenchman is likely to return in time to face Liverpool post the international break. Against Watford though, Michel Vorm should deputise in goal for Spurs.

The other players unavailable are Son Heung-min (away at Asian Games), Moussa Sissoko (hamstring), Vincent Janssen (foot) and Juan Foyth (thigh). Victor Wanyama has returned to training after returning to full training this week, although he is unlikely to feature on Sunday. Erik Lamela faces a late fitness test to determine his availability, as he recovers from a hamstring injury.

Meanwhile, the big decision that Pochettino faces is regarding the choice of system. The manager could revert to a back-three that served him well against Fulham, or choose to overload midfield with Mousa Dembele lining up alongside Eric Dier.

On Sunday, Dembele’s driving runs could help break the Watford press and allow Christian Eriksen to take up more advanced positions. The Dane could then link up with Dele Alli and Lucas Moura around the Watford box while also setting up Harry Kane.

The man in form for Watford, Roberto Pereyra has had a hand in nine goals in his last nine Premier League appearances at Vicarage Road. The Argentine finally seems to be coming into his own after two indifferent campaigns for the Hornets, with Javi Gracia giving him the freedom to express himself.

Against Tottenham, it goes without saying that Pereyra’s performance will be key if Watford are to inflict a first Premier League defeat to them on Sunday. If Kieran Trippier manages to keep a check on him though, Javi Gracia & co. could be primed to drop their first points of the season.

Sunday’s encounter pits two sides that are coming into the tie riding high on confidence after a solid start to the season. But, at least one of the winning runs will come to an end on Sunday. The latest iteration between Watford and Tottenham should be a hard one to call.

Javi Gracia’s side will be hard to break down, and they will also take the game to the visitors at every given opportunity. Their winless run against Tottenham though, is likely to continue, considering Dele Alli, Lucas Moura, Christian Eriksen and Harry Kane make for a dynamic attacking quartet. The Hard Tackle predicts a 2-1 win for Mauricio Pochettino & co.