It’s still early days in the 2018-19 season in Spain, with the second gameweek of La Liga underway. At Montilivi on Sunday, last season’s giant killers Girona will face one of the top sides that struggled against them in 2017-18, when they play hosts to Real Madrid.

Girona started their campaign on a frustrating note as they were held to a goalless draw by the returning Real Valladolid, despite dominating much of the proceedings. While there is a need to be more clinical in front of goal, there were some big positives for the Catalonian side in their first competitive outing under Eusebio Sacristan.

Real Madrid, on the other hand, saw their commanding performance be rewarded with a deserved win as they eased past Getafe in a 2-0 win last week. A distinct change in style was evident on the night, with Julen Lopetegui’s men focusing more on retaining possession while also being more assured at the back.

The corresponding fixture last term bore witness to one of the shock results of the 2017-18 season as Girona came from behind to beat Real Madrid 2-1. Ahead of their latest meeting on Sunday, The Hard Tackle takes a closer look at the encounter.

Eusebio Sacristan has taken charge of a Girona side that was mighty impressive last season. (Photo courtesy – David Ramos/Getty Images

Eusebio Sacristan has a few injury concerns to deal with before Real Madrid come visiting on Sunday. The Girona boss will be without three first-team players, all defenders, with Johan Mojica, Jonas Ramalho and Carles Planas on the treatment table.

The absence of these players has forced Eusebio to delve into his resources beyond the first-team squad, with Pedro Porro being promoted to be the right-back last week. The 18-year-old is likely to continue on Sunday against Real Madrid, with Marc Muniesa filling in as a makeshift left-back.

At the heart of the Girona defence though, Juanpe and Bernardo Espinosa form a strong partnership, with Bono a solid presence between the sticks. In midfield, the spotlight will be shining on Aleix Garcia, who is on-loan at the Montilivi from sister club Manchester City.

The young Spaniard will add steel to the midfield alongside David Timor, with Girona captain Alex Granell looking to break through the Real Madrid defence and link up with the front men. Upfront, the onus will be on the heroes from the corresponding fixture last season, Portu and Cristhian Stuani, although the latter is a minor doubt for the game. 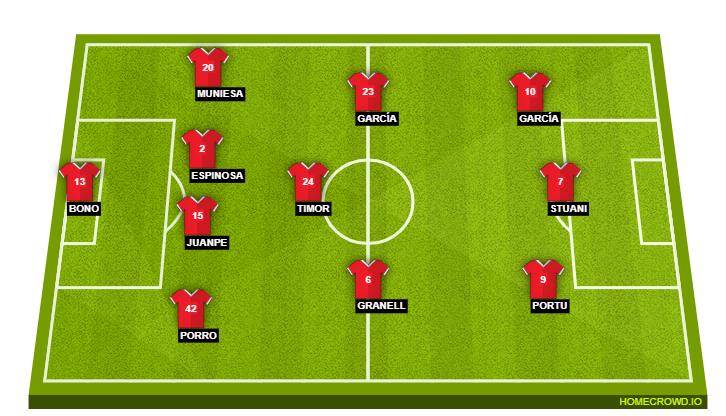 Julen Lopetegui does not have any major roster issues hampering his preparations for the trip to the Montilivi. On Sunday, the Real Madrid boss could be without just two first-team players at most, although neither Alvaro Odriozola (doubtful) nor Jesus Vallejo is a regular, yet.

In the absence of the duo, the back-four pretty much picks itself up, with Dani Carvajal, Raphael Varane, Sergio Ramos and Marcelo completing the defensive unit, meaning Nacho will drop to the bench. The big selection headaches are in the positions surrounding the backline – the goalkeeper and in midfield.

Keylor Navas was a mere passenger against Getafe last weekend, and while reports have suggested that Thibaut Courtois could be set for his Real Madrid debut, the Costa Rican should continue against Girona. In midfield, Luka Modric is the big bone of contention.

The Croat should replace the faltering Isco in the no. 10 role, with Casemiro joining Toni Kroos in the middle of the park to shore up midfield. The rest of the side should remain unchanged, especially with Marco Asensio and Gareth Bale in irresistible form. Lopetegui though, will hope Karim Benzema comes to the party after a quiet outing last week.

If Girona are to repeat the heroics of last season’s shocker at the Montilivi, their star striker will have to have his scoring boots on. The 31-year-old was the top scorer for the Catalonian outfit in the 2017-18 campaign, with an astonishing 21 goals to show for his efforts.

If the Uruguayan international is in his elements once again, the Real Madrid defence could be in for a long night, which is exactly what Eusebio will be hoping for, considering the visitors are still getting used to a new system. Stuani has it all to do on Sunday.

This is a game that produced one of the biggest upsets of last season, and one of many results that led to Real Madrid’s meek surrender of the La Liga title. While Girona now look well established in La Liga, this remains a fixture that Julen Lopetegui’s men just can’t afford to lose.

Eusebio Sacristan’s were not clinical last week, which could prove to be their biggest undoing on Sunday, in addition to their problems at the back. Real Madrid though, are still not a well oiled machine under their new manager, and it should take a bit of hard work before they eventually grab all three points. The Hard Tackle predicts a 2-0 win for Los Blancos.