Liverpool will be aiming to build on a solid start to the season when they visit Selhurst Park to take on Crystal Palace in Monday night football.

Gameweek 2 of the Premier League has been quite exhilarating thus far, with the new season going from strength to strength. Rounding out this week’s round of fixtures will be Crystal Palace and Liverpool, when they face off against each other at Selhurst Park on Monday.

Crystal Palace had a tough derby to kick off their season, with Fulham bringing the game to the Eagles at Craven Cottage. But, a clinical performance meant that Roy Hodgson’s men practically coasted to a 2-0 win over their London rivals. To add to the positive vibes at Selhurst Park, Wilfried Zaha signed a new contract, having rebuffed interest from several top Premier League clubs.

Liverpool, on the other hand, played some sumptuous football in a 4-0 win to begin their campaign. The Reds blew West Ham United away at Anfield, with Mohamed Salah and Sadio Mane continuing from where they had left off last season. But, Crystal Palace should provide tougher competition to Jurgen Klopp’s men.

The corresponding fixture last season saw Liverpool come from a goal down to secure a 2-1 win after Luka Milovojevic had given Crystal Palace an early lead. Ahead of the latest meeting between the two sides, The Hard Tackle takes a closer look at the encounter.

Roy Hodgson does not have any major issues hampering his preparations for the match, with Scott Dann the only player unavailable due to a knee injury. But, the Crystal Palace boss has more than enough cover in his squad, with former Liverpool defender Mamadou Sakho likely to partner James Tomkins at the heart of the backline.

Giving the duo company in the Crystal Palace defence, should be Patrick van Aanholt and Aaron Wan-Bissaka, who has been a revelation since pre-season. The spotlight in the Eagles’ camp though, will be in midfield, with Maximilian Meyer in line to make his competitive debut for the club after missing out against Fulham last week.

But, as the old adage goes, “If it ain’t broke, don’t fix it”, Hodgson will likely stick with the side that served him so well against Fulham last time out. As a result, Meyer should start on the bench, with James McArthur starting in midfield alongside Luka Milivojevic.

The likes of Andros Townsend and Jeffrey Schlupp will likely provide a pacy outlet on the flanks, carrying out the manager’s orders of playing on the counter-attack against Liverpool. But, the star man will undoubtedly be Wilfried Zaha, who will look to wreak havoc with his unpredictable movement and dangerous change of pace. 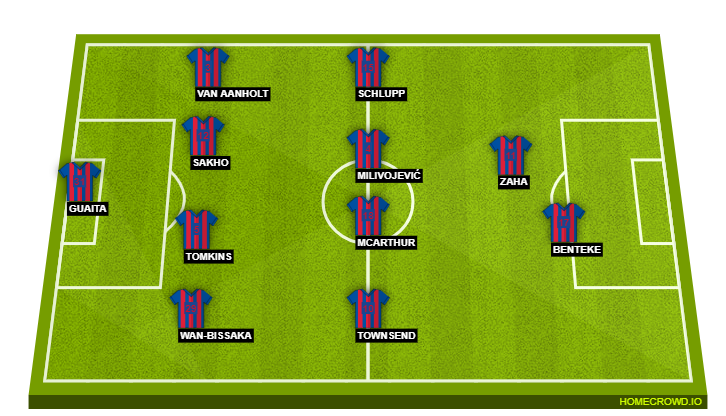 Jurgen Klopp has a few injury concerns to deal with ahead of the trip to the capital to face Crystal Palace. The Liverpool boss could be without as many as three first-team players, with Joel Matip still doubtful due to a thigh injury. Dejan Lovren and Alex Oxlade-Chamberlain though, will definitely miss out on Monday.

Like Hodgson though, Klopp is likely to stick with the same side that was triumphant against West Ham last week. Joe Gomez is seemingly growing in confidence with Virgil van Dijk as his partner in defence, and the duo will have to be at their best to stop Zaha on the night.

Trent Alexander-Arnold and Andrew Robertson will be among the key men for Liverpool against Crystal Palace, with the full-backs tasked with providing the width to enable Mohamed Salah and Sadio Mane to drift inwards. The duo’s crossing abilities will also pose a major threat on Monday.

In midfield, the trio of James Milner, Georginio Wijnaldum and Naby Keita are likely to keep Jordan Henderson and Fabinho on the bench again. Keita, in particular, will be pivotal for Liverpool with his driving runs from midfield as well as his pressing in the final third.

Salah, Mane and Firmino will look to do what they do best. Salah and Mane will interchange positions with fluidity while posing a constant threat in front of goal, with Firmino often dropping deep to create space for his partners upfront. The attacking trifecta will also aim to win balls quickly, piling the pressure on the Crystal Palace backline.

Meanwhile, at the other end of the pitch, Alisson should be braced for a much tougher test than the one that West Ham posed.

Off the mark for the season, Crystal Palace fans will hope Zaha can continue his strong run of form. (Photo courtesy – Christopher Lee/Getty Images)

Zaha is the undoubted star man for Crystal Palace, the player around whom the entire team has been built. Against Fulham, the former Manchester United star wasn’t at his best, at times. But, he still managed to find the back of the net, which makes one think just how dangerous he can be at full flow.

Upon signing a new long-term deal with his boyhood club, Zaha should be full of confidence. With the added bonus of becoming the record goalscorer in the Premier League for Palace, one can expect the 25-year-old to be in his elements, and keep his side in the game for a long time.

A match that pits two strong teams against each other, albeit those that will fight different battles as the season progresses. At this early stage of the campaign though, Crystal Palace will be eager to notch up a big upset, which they definitely look capable of.

However, Liverpool are simply irresistible at the moment, meaning Roy Hodgson’s men will find it hard to contain the Reds. This one is unlikely to be a straightforward win for Jurgen Klopp & co., who will likely have to fight for every big chance on the night.

The Hard Tackle predicts a 3-1 win for Liverpool though, with the Merseyside club having enough to grab all three points in the end. The result should also bring a run of 13 games without a loss for Palace, with James Tomkins and Mamadou Sakho starting as the central defensive partnership.