Tottenham Hotspur will look to kick off their campaign on a positive note when they visit the St. James’ Park to take on Newcastle United on Saturday

Tottenham endured a tough pre-season, with as many as 16 players missing by the time their final game was played. The aforementioned game saw Spurs suffer a shock 4-1 defeat at the hands of Girona, although some of their previous results were impressive despite the reduced squad.

However, the fact that they didn’t make a single signing in the summer transfer window has also brought forth a lot of attention towards Tottenham. Spurs though, did retain their entire squad from last season, with Toby Alderweireld in particular, staying put at the club despite a contract standoff.

Newcastle, on the other hand, look primed for a tough season after struggling during their pre-season games. Goals seem to be coming at a premium for the Magpies, who managed to score just three goals in five matches, winning just one of those. Their signings haven’t been impressive either for the most part, with Mike Ashley refusing to loosen the purse strings.

The last encounter between these two sides came at Wembley with Tottenham running out 1-0 winners over Newcastle United. Ahead of their latest meeting on Saturday, The Hard Tackle takes a closer look at the match-up.

Rafa Benitez does not have a lot of injury concerns to deal with ahead of the visit of Tottenham on Saturday. The Newcastle United boss could have just three players missing out at the most against Spurs, with Florian Lejeune the only major concern due to a long-term knee injury.

Apart from the French defender, the availability of Mohamed Diame (hip) and Martin Dubravka (groin) is in doubt. However, Benitez still has more than enough personnel to put up a strong team to play against Tottenham, with Dubravka lining up between the sticks.

In front of him, DeAndre Yedlin and Paul Dummett should be the full-backs, with captain Jamaal Lascelles being joined by summer signing Fabian Schar at the heart of the Newcastle defence. In midfield, Jonjo Shelvey will be a key player with his distribution from deep lying areas.

The former Liverpool man should be joined another new arrival Ki Sung-yueng in the middle of the park, with the South Korean providing the drive from midfield. The wide men should be Matt Ritchie and Kenedy, with the latter providing a burst of pace from the left flank.

Upfront, there will likely be two debutants in Salomon Rondon and Yoshinori Muto, with Ayoze Perez possibly starting on the bench. 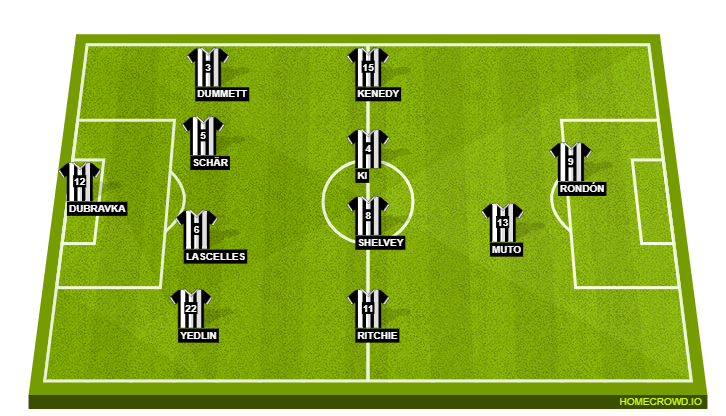 Mauricio Pochettino has a major selection headache to deal with ahead of the trip to Newcastle, and not of the kind that a manager would like to have. The Tottenham boss is facing up to the possibility of as many as 16 first-team players either missing out entirely or not starting at all on Saturday.

The likes of Cameron Carter-Vickers, Erik Lamela, Victor Wanyama, Juan Foyth, Harry Winks and Josh Onomah miss out due to various injuries. Moussa Sissoko is a doubt due to a hamstring injury, although the Frenchman could just be available for selection, and start in midfield.

Meanwhile, there are a number of World Cup participants who only returned to training this week. Among those stars, Jan Vertonghen and Eric Dier look like the only players who are likely to start against Newcastle, with the likes of Harry Kane, Mousa Dembele and Kieran Trippier making the bench.

In goal, Michel Vorm should start, deputising for Tottenham captain Hugo Lloris, while Serge Aurier will start in Trippier’s stead, with Davinson Sanchez and Ben Davies completing the backline. In midfield, Dier and Sissoko are likely to line up alongside each other, with Christian Eriksen, Son Heung-min and Lucas Moura the supply line in attack.

With Kane on the bench, the onus of spearheading the Tottenham attack will fall on Fernando Llorente, who will have a point or two to prove after an underwhelming maiden campaign with Spurs.

After arriving at Tottenham in January, Lucas Moura was given ample time to get accustomed to his new surroundings. But, after a full pre-season, the expectations from the Brazilian will be higher, especially with a number of key players being eased back into the side after their extended breaks.

With Christian Eriksen supplying the passes from a central position, Lucas will look to make his mazy runs and become a major scoring threat. His movement will also be key to support the striker, provided he can stretch the defence. A big game for the former PSG man.

On paper, Newcastle have a daunting start to the 2018-19 season, with some tough fixtures to follow after Tottenham’s visit on Saturday. But, playing a weakened side is perhaps, the best opportunity for Rafa Benitez & co. to get a decent result and grow in confidence.

The big problem for Newcastle though, is finding the back of the net. Tottenham are unlikely to be sharp in front of the goal as well, and this does not look like a match loaded with goals. A closely contested encounter beckons, and The Hard Tackle predicts a 1-1 draw on the day.