Chelsea and Manchester City will open their 2018-19 campaigns on Sunday, when they battle it out for the Community Shield at Wembley

League football in England may have commenced in the lower tier, but the Community Shield matchup will serve as the official curtain raiser for the English season. Vying for the glorified friendly on Sunday, will be Chelsea and Manchester City, looking to kick off their campaign on the brightest note possible as they return to Wembley.

Chelsea are in the Community Shield after beating Manchester United for the FA Cup title. The Blues have shown good form in their pre-season friendlies thus far, as they adapt to the change in style under Maurizio Sarri. Goals though, have been hard to come by as the squad slowly adapts to ‘Sarri-ball’.

Manchester City, on the other hand, are playing the Community Shield for the first time since 2014, when they were beaten 3-0 by Arsenal. Pep Guardiola’s men reached the Wembley fixture following their record breaking Premier League-winning campaign, although they have had a tough time during pre-season with several big-name players missing.

The two sides last faced off against each other in this tie back in 2012, when Manchester City ran out close 3-2 winners over Chelsea. Ahead of their latest meeting on Sunday, The Hard Tackle takes a closer look at the encounter.

Maurizio Sarri still has a number of first-team players missing from his squad following their participation at the 2018 FIFA World Cup. The likes of Thibaut Courtois, Gary Cahill, N’Golo Kante, Eden Hazard, Michy Batshuayi and Olivier Giroud are scheduled to return to training next week.

The spotlight though, will surely be on summer signing Jorginho, who will be key in implementing the Chelsea manager’s ‘Sarri-ball’ philosophy. The Italian international will look to dictate the play from the middle of the park, with Ross Barkley and Tiemoue Bakayoko giving him company in the midfield trio, with Cesc Fabregas likely to miss out due to a knee injury.

Ruben Loftus-Cheek is available after returning early from his extended break. But, the Englishman is likely to start on the bench against Manchester City. Another player who has returned from holidays is Willian, although the Brazilian is unlikely to be fit enough to start on Sunday.

The backline should remain unchanged from the game against Arsenal, with David Luiz being solid at the heart of the Chelsea defence. The veteran defender should be partnered by Antonio Rudiger, with Cesar Azpilicueta and Marcos Alonso being the full-backs. Willy Caballero will likely deputise for Courtois once again.

Upfront, Alvaro Morata will be aiming to exorcise the demons of the 2017-18 season, looking to kickstart the new campaign on a positive note. Giving the Spaniard company in attack will be compatriot Pedro and Callum Hudson-Odoi, who has arguably been the most impressive player for Chelsea in pre-season.

Pep Guardiola is in a much better position than Sarri as far as the availability of first-team footballers is concerned. The Manchester City boss only has Kyle Walker, Raheem Sterling and Kevin De Bruyne missing in action after their World Cup commitments.

Despite the return of several stars though, a number of youngsters should be starting against Chelsea. The likes of Sergio Aguero, Gabriel Jesus, Nicolas Otamendi, John Stones, captain Vincent Kompany and a few more have only had a few days of training, and Guardiola will likely focus on building up their fitness for the season ahead instead of throwing them into the deep end straight away.

The big-name players who are available though, are Leroy Sane, Benjamin Mendy, Aymeric Laporte, Bernardo Silva, Claudio Bravo and record signing Riyad Mahrez, all of whom should feature against Chelsea. Meanwhile, there are plenty of impressive youngsters who should be on show as well.

These will include Eric Garcia, Cameron Humphreys, Douglas Luiz and Lukas Nmecha. Luiz, in particular, could have a role in the upcoming season owing to Manchester City’s inability to land a midfielder in this summer’s transfer window. 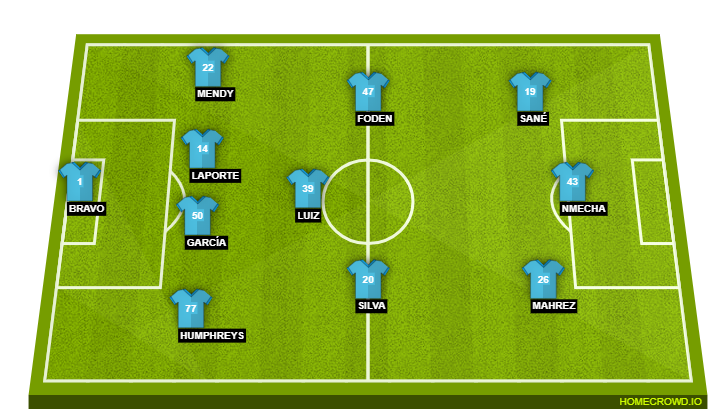 A player who was the biggest transfer target for both Chelsea and Manchester City this summer, before joining the Blues instead. With the player already looking like a potential match-winner for Chelsea, it looks like the Premier League champions have missed out on a big fish, and the early signs could be visible on Sunday.

Against a weakened Manchester City side, Jorginho has a relatively easier initiation into English football. As far as matters on the pitch is concerned, Maurizio Sarri will look towards the Italian international to run the show from the middle of the park and create the chances for his teammates in the final third.

The match not just pits two of the most successful English teams in the last decade, but also two managers who share similar ideologies in terms of style of play. Maurizio Sarri and Pep Guardiola also projected a lot of admiration towards each other over the years, and this is a match that should razzle and dazzle, setting the tone for the season to come.

Chelsea look in much better shape than Manchester City at the present moment, with the Citizens still short staffed heading into the Community Shield tie. But, the FA Cup holders shouldn’t have it easy at all, with City likely to give them a run for their money. The Hard Tackle predicts a 2-1 win for Sarri & co. to kickstart the new era for Chelsea on a strong note.