There is understandably a lot of excitement as far as football in France in concerned. And, two of the finest sides from the country will be on display this Saturday, when PSG and AS Monaco meet at the Shenzhen Universiade Sports Centre for the French Super Cup.

French football couldn’t have two better outfits to showcase the riches in talent they possess, with PSG and Monaco being two of the biggest clubs in the country. Both sides are also known to produce some of the best talents in world football, and an intriguing match is on the cards.

PSG have endured a tough pre-season, with several of their first-team stars on extended breaks following their participation at the 2018 FIFA World Cup. Les Parisiens have lost two of their five games by big margins, while narrowly winning the other two.

The going has been tough for Monaco as well, with the principality club managing to win just two of their six friendlies. But, Leonardo Jardim & co. have struggled against unfancied opponents like Hamburg, SC Paderborn and Vfl Bochum, with the World Cup taking a toll on their squad as well.

PSG cruised to a 7-1 win over Monaco the last time these two sides faced off, with Les Parisiens clinching the Ligue 1 title with the victory. Ahead of their latest meeting on Saturday, The Hard Tackle takes a closer look at the encounter.

The problems have steadily reduced for Thomas Tuchel, who has welcomed back a number of first-team stars ahead of the Trophee des Champions tie against Monaco. The PSG boss now has the likes of Thiago Silva, Marquinhos, Edinson Cavani and Neymar at his disposal now, although the likes of Alphonse Areola, Presnel Kimpembe and Kylian Mbappe, among others are still unavailable.

Each of the Brazilian stars should feature on Saturday, with Silva and Marquinhos, in particular, having almost one week of training. Cavani though, could miss out, with the Uruguayan still shaking off the injury he picked up in the World Cup.

Meanwhile, Tuchel is likely to continue with the 3-5-2 formation considering the players he has available. Lassana Diarra should continue in the back-three, with Silva and Marquinhos giving him company. Layvin Kurzawa should continue as the left wing-back, with Alec Georgen likely to be deployed on the right flank.

Midfield will be the strong suit for Les Parisiens, with Marco Verratti, Giovani Lo Celso and Adrien Rabiot forming a solid trio. Up ahead in attack, Neymar is likely to be joined by Angel Di Maria, in what is still a strong attack. In case Neymar isn’t fit enough to start, Timothy Weah could get the nod upfront.

Leonardo Jardim has been able to welcome back a few first-team stars as well. But, the AS Monaco boss still has players like Danijel Subasic, Djibril Sidibe, Radamel Falcao and summer signing Aleksandr Golovin missing out due to post-World Cup vacations, while several others remain unavailable due to injury.

The return of Kamil Glik, Youri Tielemans and Keita Balde will ease some of the concerns across the pitch though. Glik is likely to line up at the heart of the Monaco defence alongside Jemerson, with Julien Serrano and Ronael Pierre-Gabriel likely to be the full-backs.

Pele has made quite an impression since joining from Rio Ave, and the player should be the holding midfielder against PSG, with Tielemans likely to be his partner in midfield. Up ahead in attack, the impressive Sofiane Diop should get the nod in the free role behind the striker.

Keita Balde and Rony Lopes will likely be the wingers, with Jordi Mboula being an option off the bench. Stevan Jovetic, meanwhile, should get the nod to spearhead the Monaco attack on Saturday, with Moussa Sylla another impact substitute. 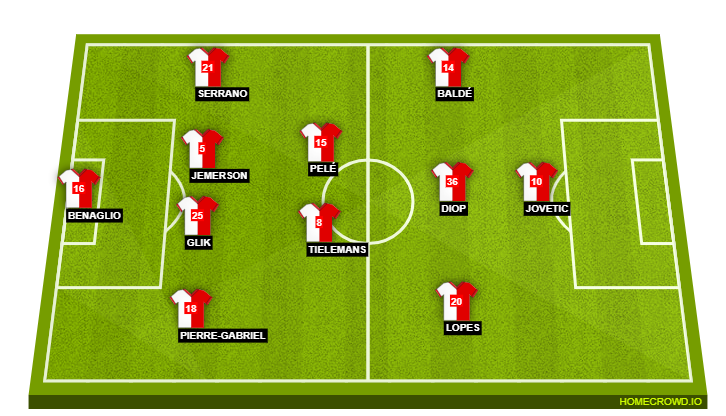 With several big name players missing the pre-season games for PSG thus far, the onus has been on Adrien Rabiot to steady the ship. The Frenchman has shown immense character, despite being heavily linked with a possible departure from the French capital.

On Saturday, Rabiot will be key once again, using his superior match sharpness to help those around him while setting the tempo of the game. His forward movement and link-up abilities will also come in handy around the final third, where the damage will need to happen for PSG.

As the French season gets set to kick off, two of the country’s biggest sides meet, albeit in unusual circumstances. Neither club will boast their full-strength lineup owing to the post-World Cup hangover. But, PSG’s win win over Atletico Madrid suggests that the French giants could be finding their rhythm. Monaco on the other hand, have looked far from the best.

Expect the two defensive units to be off pace, with the match being an exciting affair as a result. PSG do look better placed to triumph on Saturday, and claim a record-equalling six successive Trophee des Champions. The Hard Tackle predicts a 2-1 win for Thomas Tuchel & co.