Tottenham will bring an end to their campaign in the 2018 International Champions Cup when they face AC Milan in Minneapolis on Wednesday.

The 2018 International Champions Cup is into its final week as some of the best clubs across Europe bring their pre-season tours to an end. On Wednesday, Tottenham will bring the curtains down on their participation in the tournament when they take on AC Milan at the U.S. Bank Stadium.

Tottenham have been busy in their preparation before the start of the 2018-19 season, having already participated in four friendlies thus far. With two more pre-season fixtures left before turning his attention to the Premier League, Mauricio Pochettino will aim to get his reduced side into shape.

AC Milan, on the other hand, haven’t been as busy as their opponents on Wednesday, having only played a couple of friendlies thus far. The Rossoneri will look to build on their showing in the second half against Manchester United to set the tone for a challenging season that seems to be beckoning them.

The two sides last met in the UEFA Champions League six years ago when they played out a goalless draw at White Hart Lane. Ahead of their latest meeting on Wednesday, The Hard Tackle takes a closer look at the encounter.

Mauricio Pochettino already had a heavily depleted squad at his disposal for the pre-season tour of USA. But, the Tottenham boss now has a proper crisis on his hands, with no senior central midfielder left at his disposal, effectively putting him in a major spot of bother as regards the Premier League season opener as well.

As many as seven midfielders are unavailable for Pochettino after Moussa Sissoko sustained a hamstring injury against Barcelona last time out. Victor Wanyama could be a long-term absentee after a recurrence of the knee injury that kept him out for most of last season forced him to be sent back home.

Harry Winks and Joshua Onomah are also recovering from injuries, while Eric Dier and Mousa Dembele are on vacation after their World Cup commitments. The grave injury crisis could thus, force Pochettino to deploy Christian Eriksen in a withdrawn role in the middle of the park, with the inexperienced Luke Amos giving him company.

The situation in attack is a bit more settled, despite the absence of Dele Alli and Harry Kane. The likes of Fernando Llorente, Erik Lamela and Lucas Moura have been impressive in their stead, and will likely be able deputies for the first gameweek of the Premier League at the very least.

At the back though, there are a few problems, with the likes of Hugo Lloris, Kieran Trippier, Danny Rose, Toby Alderweireld and Jan Vertonghen all missing. The defensive unit is thus, down to its bare bones, with Juan Foyth unavailable as well, due to a thigh injury.

So, the team selection in defence is rather straightforward, with Michel Vorm, Serge Aurier, Davinson Sanchez, Ben Davies and Kyle Walker-Peters expected to start.

Gennaro Gattuso barely has any problems as far as the availability of personnel is concerned. The major issue though, is the uncertain future of captain Leonardo Bonucci, which is sure to leave a lot uncertainty in the AC Milan camp.

Bonucci is unlikely to start on Wednesday, with Alessio Romagnoli and Mateo Musacchio expected to line up at the heart of defence. With Andrea Conti still nursing a long-term injury, Ignazio Abate should be the right-back once again, while the returning Ricardo Rodriguez could straightaway slot in on the opposite flank.

Behind the backline, Pepe Reina should be the man to get the nod after his exploits against Manchester United. Manuel Locatelli was decent in the aforementioned game as well and should start at the base of the midfield, with Franck Kessie and Luca Antonelli joining him in the middle of the park.

Meanwhile, attack presents Gattuso with a number of options, all of whom will likely get some game time. The three starters though, are expected to be Andre Silva, Suso and Fabio Borini, with Patrick Cutrone, Hakan Calhanoglu and Alen Halilovic coming off the bench. 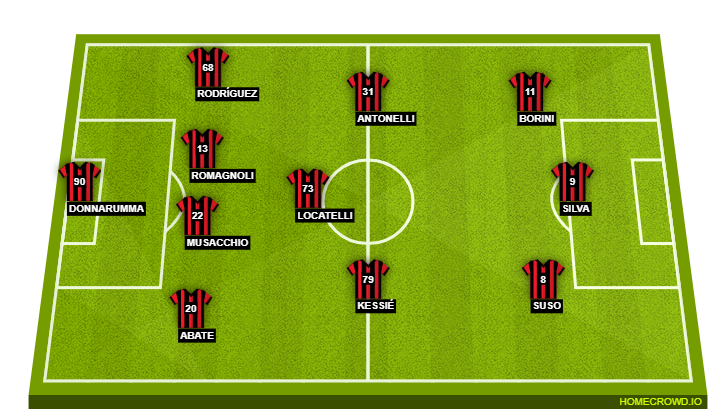 Journey so far in the International Champions Cup

Tottenham will be facing their second Italian opposition in the International Champions Cup, having already faced and beaten AS Roma in their tournament opener. Spurs then faced Barcelona, playing out a 2-2 draw before losing out in the penalty shootout that followed.

AC Milan, on the other hand, have only played one game in the International Champions Cup thus far. The Rossoneri though, don’t stand any chance of winning the competition after being beaten in a bizarre penalty shootout by Manchester United after the match ended 1-1 in regulation time.

With as many as seven central midfielders unavailable, and likely to miss out on the Premier League opener against Newcastle United, Mauricio Pochettino has the wrong kind of selection headache to deal with. Luke Amos and Oliver Skipp have impressed in pre-season so far. But, the youngsters need an experienced head to guide them.

Christian Eriksen will thus, have a lot of responsibility on his shoulders while playing in a deeper role than he is usually accustomed to. With the Dane looking likely to start in the role against Newcastle, the Tottenham boss should give him as much time as possible against a strong opponent like Milan.

This is a match that is hard to call. Tottenham have more match practice, but are bereft of quality in midfield and defence. Gennaro Gattuso has a near full-strength squad at his disposal, but seem to be lacking cohesion for now. The two sides thus, seem to be on an even pedestal.

Tottenham have shown that they still have enough quality in attack to give the best of sides a run for their money, as they showed against AS Roma and Barcelona. But, the weaknesses at the back will make Milan a major threat throughout the game. The Hard Tackle, therefore, predicts a 1-1 draw, with Milan winning in the penalty shootout.