The countdown has begun. Less than two weeks remain for the Premier League season to begin. Two sides that will be expected to contend for the title will look to get their preparations into top gear as Manchester United and Liverpool meet at the second biggest sporting venue in the world – the Michigan Stadium – on Saturday.

Manchester United have looked rather uninspiring thus far on their pre-season tour of USA. While they haven’t been beaten yet, successive draws against Club America and San Jose Earthquakes left a lot to be desired. Jose Mourinho’s men did look much improved in the penalty shootout win over AC Milan. But, a lot more needs to be done before the season begins.

Liverpool, on the other hand, started their pre-season participation before each of their rivals, meeting four lower league oppositions in England before making their way to USA for the ICC. The Reds’ tour started with a 3-1 loss to Borussia Dortmund before they beat Manchester City in their sixth pre-season game.

The two sides have met previously in this pre-season tournament, with Manchester United running out 3-1 victors to win the 2014 edition. Ahead of their latest meeting on Saturday, The Hard Tackle takes a closer look at the encounter.

Jose Mourinho’s issues with a thin squad have been quite well documented by now. The Manchester United manager has often cut an exasperated figure over the number of internationals he’s missing due to World Cup commitments, with several first-team players set to miss the first game of the season.

Antonio Valencia’s pre-season ending injury and Anthony Martial taking a leave of absence due to the birth of his child has piled on the woes. But, there has been some respite over the last week or so. Alexis Sanchez was the first to join the squad, belatedly so due to visa complications. The Chilean has since been followed by the arrivals of Nemanja Matic, David de Gea and Fred.

Speaking of Sanchez, the pre-season tour was very important for the January arrival, giving him the opportunity to gel with the squad in a much more relaxed environment. And, the 29-year-old seems to be coming into his own, which should bode well for Manchester United this season.

Meanwhile, Fred and de Gea are unlikely to play a big role on Saturday, if any after only training for a couple of days. Fred could get a few minutes late on. But, Andreas Pereira, Scott McTominay and Ander Herrera are likely to start in the midfield trio, with Matic struggling with a minor injury.

Mourinho experimented with a back-three against AC Milan.

But, the Manchester United boss should revert to the 4-3-3 formation on Saturday, with Luke Shaw, Eric Bailly, Chris Smalling and Matteo Darmian – despite his uncertain future – retaining their places. Upfront, Sanchez should be joined by Angel Gomes and Juan Mata, with Tahith Chong likely to get a run in the second half.

Jurgen Klopp has had issues with the squad as well. But, the Liverpool boss will be relieved to have most of his first-team players available for the last few games of the pre-season. The likes of Alisson, Dejan Lovren, Trent Alexander-Arnold, Roberto Firmino and captain Jordan Henderson though, are still missing for the Reds.

But, the big news is the arrival of Mohamed Salah and Sadio Mane, both of whom marked their returns with a goal apiece to win the game against Manchester City. Xherdan Shaqiri has also joined the squad this week, and could get his first taste of the rivalry between Manchester United and Liverpool with an appearance late on.

Meanwhile, there are concerns over the fitness of Naby Keita, Loris Karius and Georginio Wijnaldum. While Keita will likely miss the game due to a stiff neck, Karius (sore knee) and Wijnaldum (muscle problem) are minor doubts. If the German goalkeeper is unavailable, Caoimhin Kelleher could get the opportunity to start on Saturday.

The rest of the team selection seems rather straightforward, with Nathaniel Clyne, Joe Gomez, Virgil van Dijk and Andrew Robertson completing the back-four. In midfield, Fabinho and James Milner should be joined by Marko Grujic. Salah and Mane should have Dominic Solanke for company, with Daniel Sturridge getting his chance in the second half. 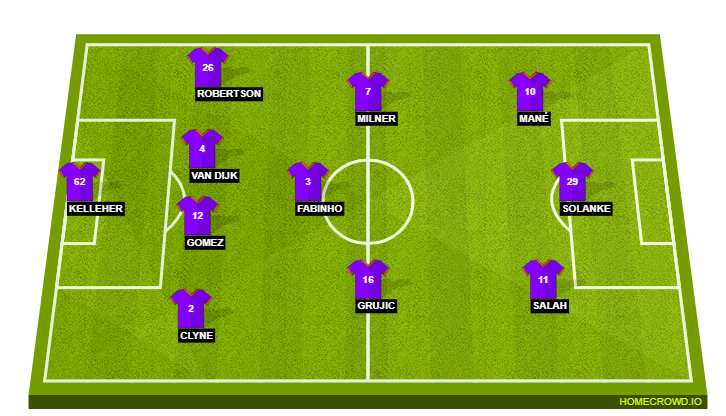 Journey so far in the International Champions Cup

Manchester United may have been in USA for over 10 days now. But, their International Champions Cup journey this year is only one game in. Jose Mourinho’s men played AC Milan on Thursday in what was an evenly contested affair. In the end, it was all square. But, the penalty shootout was the major talking point as it ended 9-8 in United’s favour after both sides had taken an astonishing 13 penalties each.

Liverpool, on the other hand, will be playing their final game of the tournament on Saturday, and have no chance of winning it. The Reds lost their first game to Borussia Dortmund after surrendering a one-goal lead to lose 3-1. But, they got back to winning ways with a 2-1 win over Manchester City. A win over Manchester United though, should set the tone for the 2018-19 season perfectly.

Coming into his own. (Photo courtesy – John McCoy/Getty Images)

The pre-season tour is often seen as the best way for the summer signings of a club to gel with their new teammates while getting used to the change in system. For someone like Alexis Sanchez, the tour has been equally important after immediately being thrown into the deep end upon his January transfer from Arsenal.

In a much more relaxed environment without the burden of expectations, the Chilean seems to be growing into his role as a key player for Manchester United. Shockingly, this has been his first pre-season for more than half-a decade, which also helps with his recovery after a long 2017-18 season. Another big performance against Liverpool will make for promising signs for the season ahead.

This is a match that pits two squads at different stages of their development in the pre-season. Liverpool haven’t convinced completely thus far. But, the return of Mohamed Salah and Sadio Mane has put a spring in their steps, with the duo looking in menacing mood against Manchester City.

Manchester United though, look a long way behind the Reds in terms of performance and match fitness. But, Liverpool still have problems at the back, which makes for good news for their bitter rivals, as they look to be more clinical in front of goal.

Liverpool still have more than enough, both in terms of personnel and rhythm to get one over their rivals on Saturday. The Hard Tackle predicts a closely contested game, with Jurgen Klopp’s men to edge Manchester United in a high scoring game.