The quarter-finals are all done and dusted, meaning just four matches remain before the 2018 FIFA World Cup comes to an end. The first of the semi-finals will pit European heavyweights against each other, as France and Belgium meet at the Krestovsky Stadium in Saint Petersburg on Tuesday.

France have been steadily finding their best form over the course of their FIFA World Cup 2018 campaign. Les Bleus were hardly impressive during the group stage. But, qualification to the knockout rounds seems to have turned on a switch. Didier Deschamps’ men impressed with their comeback win over Argentina in the Round of 16 before clinically disposing off Uruguay in the quarter-finals.

Belgium, on the other hand, have been one of the most consistent sides in Russia. The Red Devils were largely untroubled in the group stage. But, Roberto Martinez’s men have shown a lot of determination and character in the knockout rounds. Their comeback win over Japan in the Round of 16 was stirring before narrowly beating Brazil in the quarter-finals.

The two sides last faced each other in 2015, when Belgium had edged out France in a 4-3 win. Ahead of their latest meeting on Tuesday, The Hard Tackle takes a closer look at the semi-final encounter.

France have only been improving over the course of their World Cup campaign. (Photo courtesy – Alexander Hassenstein/Getty Images)

Didier Deschamps has no major roster issues to deal with ahead of the semi-final tie. The France boss should thus, have his entire squad at his disposal on Tuesday, with Blaise Matuidi now available after serving a one-match suspension against Uruguay, although Djibril Sidibe is a minor doubt.

Whether Matuidi returns to the side straightaway remains to be seen, especially with Corentin Tolisso performing admirably against Uruguay. The rest of the side needs no changing anyway, with the forward line, comprising of Antoine Griezmann, Kylian Mbappe and Olivier Giroud, starting to get in its stride.

In midfield, N’Golo Kante has been colossal thus far, and will need to continue in the same mould on Tuesday to stop a marauding Kevin De Bruyne. Paul Pogba will be key as well, with his ability to link up play as well as spray the ball from midfield.

At the back, Raphael Varane and Samuel Umtiti have finally grown accustomed to their partnership, while Lucas Hernandez has been the most consistent defender. But, the star man has been Benjamin Pavard, who will look to keep an in-form Eden Hazard quiet on Tuesday.

Roberto Martinez has a major headache ahead of the game against France, with Thomas Meunier set to miss out the semi-final tie. With no natural replacement in his squad, the Belgium manager will have to bank on the duo of Nacer Chadli and Yannick Carrasco to be his wing-backs.

The returning Carrasco should start on the left flank, with Chadli being deployed on the opposite flank. For Chadli, in particular, FIFA World Cup 2018 has been a redeeming tournament for him, after copping a lot of flak upon his selection in Belgium’s final squad. The West Bromwich Albion man will look to be influential once again with his marauding runs down the right flank.

Another player who has enjoyed a stellar FIFA World Cup 2018 campaign is Marouane Fellaini. The Manchester United man has become a key figure in midfield, having showed some impressive defensive acumen while always being an outlet in the final third whenever the crosses flow in.

The star quantities for the Red Devils though, will be their fluid front trio of Eden Hazard, Kevin De Bruyne and Romelu Lukaku. While Hazard and De Bruyne will largely have free roles in the final third, Lukaku will look to stretch the defensive line in order to create space for his attacking partners to exploit and possibly find scoring opportunities.

The back-three of Jan Vertonghen, Vincent Kompany and Toby Alderweireld were at their most impressive thus far against Brazil. A similar performance against France could set Belgium on the path to their first ever World Cup final. Thibaut Courtois will be crucial as well, with his shot stopping abilities, something that frustrated Brazil to no end last week. 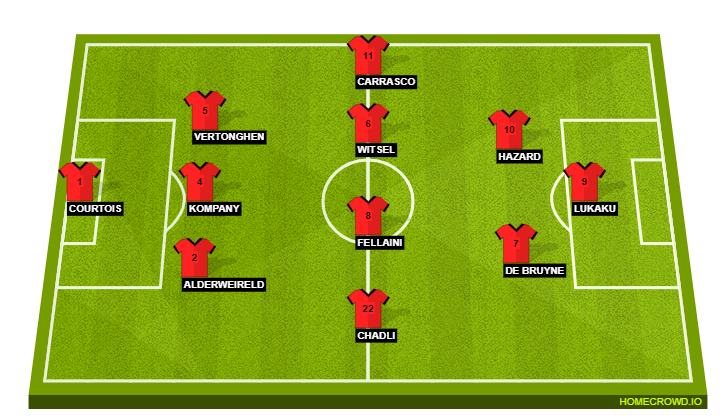 A player who wasn’t really in Roberto Martinez’s plans as a starter for the World Cup. Marouane Fellaini has made one of the midfield spots his own since his game changing performance against Japan last week. The outing against Brazil though, has to rank as one of his best in national colours so far, if not the best.

Against Brazil, his defensive abilities came to the fore, and he will need to keep Antoine Griezmann quiet in similar fashion on Tuesday if France are to be eliminated. On the other end of the pitch, he will remain a major threat, and one can safely say Fellaini’s role will be one of the most crucial ones on Tuesday.

Just four teams remain at FIFA World Cup 2018. On Tuesday, the count will be whittled down to three when two heavyweights of the game clash in Saint Petersburg. France and Belgium have eliminated South America’s three biggest nations, and confidence is sure to be running high in both camps.

On paper, both sides look evenly matched, and it is hard to separate them on form as well. This is a game that should go right down the wire, but the fluid front-three of Kevin De Bruyne, Romelu Lukaku and Eden Hazard gives Belgium the slightest of edges.

The Red Devils have also shown that, unlike their last two major international tournaments, the big matches do not faze them. While France will be their toughest challenge yet, we predict Belgium to win by the odd goal on Tuesday and create history by reaching their first ever World Cup final.