A place in the semi-finals of the 2018 FIFA World Cup will be up for grabs when Brazil and Belgium meet in Kazan for their quarter-final tie on Friday.

The 2018 FIFA World Cup is getting right into its business end, with less than ten days left for the tournament to end. This week, the participants will be sifted down from eight to four as the four quarter-finals are played. The biggest of these meetings will take place at the Kazan Arena on Friday as Brazil face Belgium.

Brazil seem to be getting into their stride, slowly but surely, although their famous brand of free flowing football still seems to be missing for some reason. But, they were largely comfortable in their Round of 16 game against Mexico, as the Selecao saw of El Tri in an efficient 2-0 win.

Belgium, on the other hand, seem to have dropped off a little since starting off the tournament with a bang. After finishing the group stage with a perfect record, the Red Devils were made to work hard, as they came back from two goals down before finally winning their Round of 16 tie against Japan deep into injury time.

The two sides last met at the 2002 FIFA World Cup, when Brazil saw off Belgium in a comfortable 2-0 win. Ahead of their latest meeting on Friday, The Hard Tackle takes a closer look at the quarter-final encounter.

Brazil did top their group standings before meeting Mexico in the Round of 16. But, it had also come at a cost, with several players sustaining injuries. The notable absentees for the Selecao were Marcelo, Danilo and Douglas Costa, although their void has been filled quite well thus far.

In the absence of Danilo on the right side of defence, Fagner has stepped up exceedingly well, making the position his own with some solid showings. While he did struggle a little against the pace of Hirving Lozano, the 29-year-old should continue as the right-back even though Danilo has returned to fitness.

On the opposite flank, Filipe Luis has always been an able deputy to Marcelo in the National side, proving the same once again in the last two games as well. The Real Madrid defender though, is back to full fitness and should return to Tite’s side on Friday.

Meanwhile, Douglas Costa is still not at a 100 per cent although he has returned to training, meaning Willian will continue on the right side of the attack. But, the biggest absentee for Brazil on Friday will be Casemiro, who is suspended after picking his second yellow card of the tournament. The holding midfielder should be replaced by Fernandinho in the middle of the park.

The rest of the side should remain unchanged though, with the core players retaining their places against Belgium even though Roberto Firmino seems to have made a case for a start.

The onus will again rest on Brazil’s talisman Neymar, who is starting to deliver but also continues to attract attention for the wrong reasons. When it comes to the tangibles though, Neymar seems to be in a league of his own, having created more chances, taken more shots and attempted more dribbles than anyone else at FIFA World Cup 2018.

As compared to their opponents on Friday, Belgium have been luckier as regards the roster issues. The Red Devils did start the tournament with a sort of a crisis in defence, with both Vincent Kompany and Thomas Vermaelen unavailable. But, the duo have since recovered, with Kompany even featuring in the last two games for Roberto Martinez’s side.

The former Atletico Madrid man was a major liability for Belgium against Japan and could find himself in trouble, with Nacer Chadli making a case for his inclusion after a fantastic cameo last time out. One player who looks set to start though, is Marouane Fellaini, with Roberto Martinez hinting towards the need for more power.

The player who looks the likeliest to make way for the Manchester United midfielder is Dries Mertens, although his exclusion would pile on the burden on Kevin De Bruyne, Eden Hazard and Romelu Lukaku. But, Axel Witsel’s presence in midfield is vital, meaning Mertens remains the only expendable player in attack.

Meanwhile, the likes of Thomas Meunier, Jan Vertonghen and Kevin De Bruyne will need to be careful as their next booking will lead to a one-match ban. 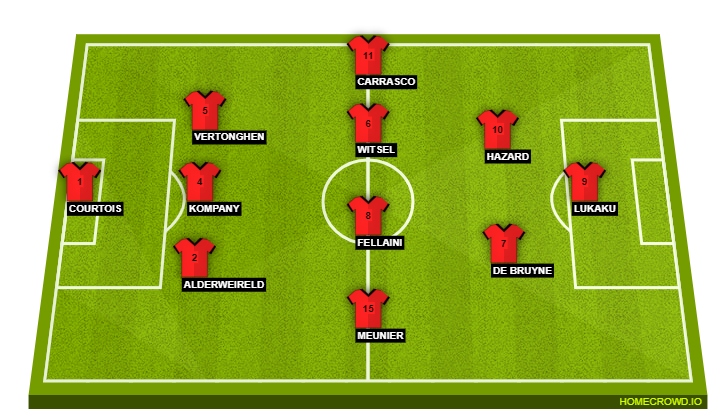 Winning the midfield battle will be key to triumphing in the encounter on Friday. This is where Fernandinho will be crucial for Brazil. Set to replace Casemiro in the middle of the park, the Manchester City midfielder will have some big shoes to fill, although he is more than capable to fill in for Casemiro.

Playing the anchor man role in front of the Brazil back-four, keeping Belgium talisman Eden Hazard quiet will be his primary task. But, Fernandinho should also pose a threat with his ability to find the goal from distance, making him a formidable proposition for the Selecao.

The second quarter-final of FIFA World Cup 2018 will pit two of the pre-tournament favourites that are coming into the tie with contrasting runs of form. While Brazil have been constantly improving without ever being at their best, Belgium seem to have lost some form after playing a largely second string side against England in their last group game.

One thing that seems to be certain is that the match should serve up plenty of goals. The difference in quality at the back should make all the difference to the final result as well though, which is where Brazil should triumph eventually.

Japan showed that there are gaps to be exploited in the Belgian defence, which the ever improving Neymar, in addition to Philippe Coutinho should take advantage of. Brazil should thus, have enough to triumph by the odd goal on Friday.