A place in the quarter-finals will be up for grabs when Uruguay and Portugal meet at the Fisht Olympic Stadium in their Round of 16 match on Saturday.

The knockout phase of the 2018 FIFA World Cup will begin on Saturday, with the contenders sifted down by half from 32 teams. One of the two matches on the day will see Uruguay and Portugal lock horns at the Fisht Olympic Stadium in Sochi, with a place in the quarter-finals on the line.

Uruguay reached the Round of 16 with a perfect record after their three group stage games. The latest of these wins saw them build a lot of momentum with a 3-0 drubbing of hosts Russia, but what has been most impressive about their campaign thus far is their defensive solidity, with La Celeste not conceding a single goal.

Portugal, on the other hand, nervously limped over the line following their group stage campaign, with five points from three matches. The final game was a captivating 1-1 draw with Iran that saw them go on the cusp of being ousted from the competition in the group stage for the second successive edition. But, the Seleccao held on to qualify as Group B runners-up.

The two sides haven’t faced each other since 1972 – which was only their second ever meeting – when Uruguay and Portugal played out a 1-1 draw. Ahead of their latest meeting on Saturday, The Hard Tackle takes a closer look at the Round of 16 encounter.

The men who have it all to do. (Photo courtesy – Michael Steele/Getty Images)

Uruguay do not have any major concern heading into their Round of 16 encounter against Portugal. Oscar Tabarez had only been sweating over the fitness of Jose Maria Gimenez, but the centre-back seems to have recovered from his thigh injury and is set to line up alongside Atletico Madrid teammate Diego Godin at the heart of defence.

The two will form a major part of the formidable spine of the side that will look to keep things tight right down the middle. Flanking Godin and Gimenez, should be Martin Caceres and the returning Guillermo Varela, who should replace Diego Laxalt in the lineup. The quartet will be protecting the impressive Fernando Muslera in the Uruguayan goal.

Meanwhile, Tabarez has a major incentive to continue with the system that worked like a charm against Russia, meaning a midfield diamond featuring Lucas Torreira, Nahitan Nandez, Matias Vecino and Rodrigo Bentancur should be persisted with. If the system fails to deliver, the likes of Cristian Rodriguez and Giorgian de Arrascaeta could be called upon to provide a pacy outlet.

The primary focus though, will be on finding the strike partnership of Luis Suarez and Edinson Cavani in pockets of spaces and breaking through the half spaces in and around the Portugal box. The likes of Nandez and Bentancur are also likely to test Rui Patricio with their long-range efforts. 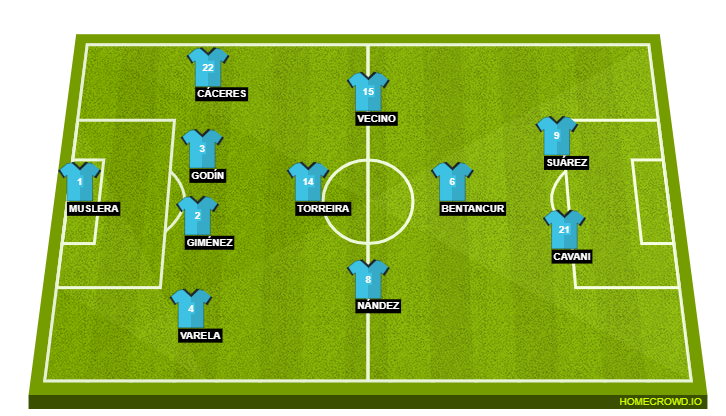 Fernando Santos has the luxury of a fully-fit squad that has not been hampered by any suspension issues either, heading into the crunch Round of 16 tie against Uruguay. In fact, the Portugal boss has a largely well settled side, that is unlikely to be tinkered with much on Saturday.

The tight-knit defensive unit should remain unchanged, with Rui Patricio set to start in goal. Ahead of him, Cedric Soares, Pepe, Jose Fonte and Raphael Guerreiro will form the backline, with the onus on the central defensive partnership of Pepe and Fonte to keep Suarez and Cavani quiet on the night.

The big problem for Portugal though, has been transitioning from midfield to attack, with Santos not able to zero in on his best possible midfield quartet. However, Ricardo Quaresma is likely to continue on the right flank after scoring a magnificent goal against Iran, although he would still like to improve on his overall performance.

Another player who looks set to retain his spot is William Carvalho, with the midfielder keeping things tight in front of the backline. The other two spots in contention should see the likes of Joao Moutinho, Adrien Silva, Bruno Fernandes and Joao Mario vie for them, with Moutinho and Mario likely to get the nod on Saturday.

Upfront, there should be another change as to Cristiano Ronaldo’s partner, with Goncalo Guedes likely to return after losing his place to the unimpressive Andre Silva. Joining Silva on the bench, should be Gelson Martins and Bernardo Silva, who could both be important players coming off the bench. 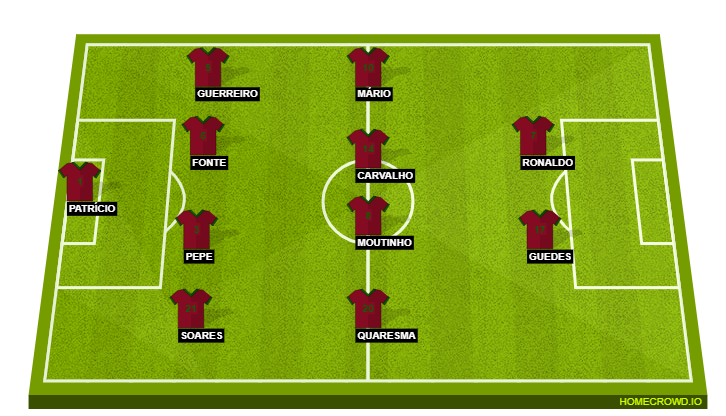 While a lot of the spotlight will be shining on Edinson Cavani and Luis Suarez on Saturday, the onus will be on Diego Godin to keep Uruguay’s defensive shape intact against a tricky Portugal attack. Cristiano Ronaldo, in particular, will be the centre of attention for the Atletico Madrid man, who will be eager to keep his club rival quiet.

The Portugal captain though, will also provide the sternest test yet to Godin, and a lot will depend on how Uruguay and Godin come out of this particular duel as Oscar Tabarez’s men eye a return to the latter stages of the World Cup.

The 2018 FIFA World Cup enters the knockout stages on Saturday, as things start getting serious in Russia. An underrated tie in the Round of 16 will pit Portugal and Uruguay in Sochi, with the two sides matches quite evenly on their strengths and weaknesses.

However, seeing as how Portugal depend so very heavily on Cristiano Ronaldo in the final third as compared to more such personnel for Uruguay, coupled with the fact that La Celeste boast one of the most formidable defensive units at the World Cup, Oscar Tabarez & co. do hold a slight edge.

While this match is extremely tough to call, we think Uruguay have the means to just edge out Portugal by the time the full-time whistle is blown. A match that could also see the VAR rear its ugly head, expect things to get heated up on the pitch as well. The Hard Tackle predicts a 2-1 win for the South Americans.